Félix Rubén García y Sarmiento (January 18, 1867 – February 6, 1916) was a Nicaraguan journalist, diplomat, and poet who wrote under the pseudonym of Rubén Darío. He was a gifted child and traveled widely in his life. Many critics consider him to be one of the greatest Spanish-language poets in history. He experimented with various styles of verse, and his poetry is known for its creativity, lyricism, and masterful use of rhyme and meter. In his early works, he often dealt with romantic and mythological subjects, conveying a poignant sense of realism and tragedy in his later works.

Darío became the foremost writer in the movement known as Modernismo in Spanish-American literature, and his poetry brought vigor to the stale, monotonous Spanish-language poetry of the time. He is known for his collections Azul and Prosas profanas, both of which demonstrate his showcase of the romanticism and symbolism of Modernismo.

Félix Rubén García y Sarmiento was born on January 18, 1867, in San Pedro de Metapa, Nicaragua, which was later renamed Ciudad Darío in his honor. Rubén's parents, Manuel Garcia and Rosa Sarmiento Alemán, separated before his birth. Félix was very intelligent as a child and learned to read when he was only three years old. In 1870 he enrolled in Jacoba Tellería's kindergarten and later attended public school in 1874. Félix went to private school for a short time before he attended a Jesuit school. However, his early Jesuit training does not appear to have influenced him significantly, other than possibly intensifying his mystical inclinations.[1]

Félix displayed much talent from an early age, gaining a reputation as "El Niño Poeta" (the boy poet). When he was just 13 years old, he published his first poem, "Una lágrmia" (A tear), in the periodical El Termómetro on June 26, 1880. It was then that he assumed the name Rubén Darío, from his great grandfather.

As a teenager Darío became a regular contributor to the journal El Ensayo. In 1881, he attended the Instituto de Occidente and later taught Spanish grammar at a friend's school. After leaving school, Darío traveled to Managua in hopes of receiving financial support from the government to study abroad. Instead, he was offered a stipend on the condition that he enroll at a Nicaraguan school. He rejected the offer and traveled to El Salvador, where he was introduced to contemporary European literature. There, he met Francisco Gavidia, who introduced him to French literature and new verse styles that would later influence Darío's own writing. 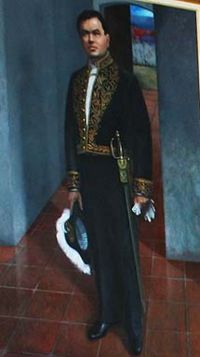 A framed picture of Rubén Darío hanging in the National Theater.

In 1883, Darío returned to Nicaragua, where he took a position working for President Adán Cárdenas on the plan for a Central American Union, until he was offered a job at Nicaragua's National Library in Managua. Here, Darío set out to further his literary education. Darío published his first book, Epístolas y poemas (Epistles and Poems), in 1885, and co-founded the newspaper El Imparcial in 1886. In June of that year, he moved to Valparaiso, Chile, where he lived for the next three years, and became a regular contributor to the publication La Epoca. In 1887, Darío earned first prize for his Canto épico a las glorias de Chile. Also in 1887, he published Abrojos (Thistles) and Rimas (Rhymes).

Darío had published an unsuccessful first novel, Emelina when he was only 19. He then came under the patronage of Pedro Balmaceda, who helped him to publish his book of poems, Azul (Blue) in 1888, which is a romantic collection of poetry about love, harmony and nature. Initial reviews were disparaging, but Spanish critic Juan Valera of the Real Academia Española helped launched the young poet's career by praising his poems, while sharing other critics' disparagement of his degree of adoption of French models. Azul contained new and experimental forms, and marked a departure from Darío's more traditional work. The elegance and refinement of Darío's style introduced new standards of expression, and this book was a turning point in Spanish literature toward modernism. In 1890 the second, enlarged edition of Azul was published, which further reflected Darío's move toward modernism.

In 1889 Darío returned to Central America after receiving news of his father's death. In June he traveled to El Salvador, where he founded the newspaper La Unión. He subsequently moved to Guatemala, where he launched the newspaper El Correro de la Tarde in 1890. Darío contributed to La Prensa Libre, before writing for El Heraldo in 1892. He departed for Spain in late 1892 to attend to his diplomatic duties, and also on assignment for the Latin American newspaper La Nación. In 1893 he moved to Buenos Aires and remained there until 1898. Here, he had time to work on his writing and co-founded Revista de América. While in Argentina, Darío worked as a journalist and wrote short stories.

In 1896 Darío published Prosas profanas (Profane prose), which shows his interest in symbolism and is filled with the theme of love, followed by Los raros (The eccentrics), which was a collection of essays on various writers, such as Edgar Allen Poe and Leconte de Lisle.

Darío spent a majority of his later years in Europe. He returned to Spain in 1898 where he continued to work as a reporter for La Nación, until being transfered to Paris. In 1905, he published the poem Cantos de vida y esperanza (Songs of life and hope), which is distinguished by a more serious tone than his earlier, more elegant work. In Cantos de vida y esperanza Darío moves away from the ideal and leans toward more human and global concerns, such as nationalism and politics, and focuses more on himself and his culture.

Darío wrote many articles and stories while in Spain, including España contemporánea (Contemporary Spain), Peregrinaciones (Pilgrimages) and La caravana pasa (The caravan moves on). Yet, he continued to travel widely; and, in 1904, wrote Tierras solares (The lands of our ancestral home), which chronicled his travels throughout Africa, Europe and Russia.

In 1892, when Darío returned to Guatemala, he was informed that he had been nominated as the Nicaraguan representative to the Quadricentennial Celebrations in Spain, which marked the discovery of America. Darío later moved to Nicaragua after traveling through Cuba and Colombia, where he was appointed as a diplomat in Buenos Aires, and subsequently nominated as Colombian consul in that city, serving there until 1894.

Darío was counsul of Nicaragua to Paris from 1902 until 1907. He attended the 1906 Pan-American Conference in Rio de Janerio in July and August as secretary of the Nicaraguan delegation.

In late 1907 Darío returned to Nicaragua, only to return to Europe again when he became Nicaragua's ambassador to Spain and consul in Paris. He was named Nicaragua's representative to Mexico's centenary independence celebrations in 1910. Darío's diplomatic career came to a halt when President José Madriz's Nicaraguan government was overthrown by rebels and American intervention.

Darío married Rafaela Contreras on June 21, 1889. In 1891, he and his wife traveled to Costa Rica, where their son, Rubén Darío Contreras was born on November 11. Darío's wife died on January 21, 1893. On March 8 of that same year, Darío married Rosario Emelina Murillo. His second son was born six weeks later. Darío attempted to obtain a divorce from his second wife, but was unsuccessful. In 1898, Darío met Francisca Sánchez while in Spain and they had two children together, both of whom passed away while they were young.

In his final years, Darío worked as an editor for Mundial, which was a Spanish magazine published in Paris, and continued to write some less creative poetry, such as El canto errante (1907), El viaje a Nicaragua (1909), and Poema del otoño (1910). Later, he compiled Canto a la Argentina y otros poemas (Song of Agrentina and other poems) while in Barcelona, Spain.

Following the beginning of World War I in 1914, Darío gave lectures on world peace and poetry readings in New York City and Guatemala. However, due to poor health, Darío moved to León, Nicaragua where he died on February 6, 1916, from atrophic cirrhosis of the liver after a long battle with alcoholism.

Not to be confused with Anglo-American Modernism, the Modernismo movement was a recapitulation of three movements in Europe: Romanticism (romanticismo), Symbolism (simbolismo) and Parnassianism (parnasianismo). These ideas express passion, visual art, and harmonies and rhythms with music. Darío was the genius of this movement. His style was exotic and very vibrant. In his poem Canción de Otoño en Primavera ("The Song of Fall in Spring") there is much evidence of passion and strong emotions.

Darío marks an important shift in the relationship between literary Europe and America. Before him, American literary trends had largely followed European ones; however, Darío was clearly the international vanguard of the Modernist Movement.

Roberto González Echevarría considers him the beginning of the modern era in Spanish language poetry: "In Spanish, there is poetry before and after Rubén Darío... the first major poet in the language since the seventeenth century…He ushered Spanish-language poetry into the modern era by incorporating the aesthetic ideals and modern anxieties of Parnassiens and Symbolism, as Garcilaso had infused Castilian verse with Italianate forms and spirit in the sixteenth century, transforming it forever."[2] 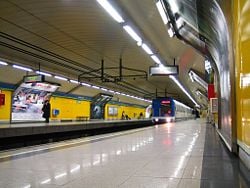 Darío's fundamental collection, Azul, established his reputation as one of the most important Spanish-language exponents of Modernismo. Many critics consider his death in 1916 to mark the symbolic end of this movement.

He has been cited as inspiration for later Latin American and Carribean writers such as Álvaro Mutis, Reinaldo Arenas, Lezama Lima, Luisa Valenzuela, Clarice Lispector and Giannina Braschi.

In honor of Darío's 100th birthday in 1967, the government of Nicaragua struck a 50 cordoba gold medal and issued a set of postage stamps. The set consists of eight airmail stamps (20 centavos depicted) and two souvenir sheets.