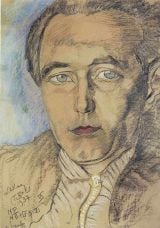 Roman Witold Ingarden (February 5, 1893 - June 14, 1970), a Polish philosopher and one of the most important philosophers for phenomenological aesthetics. During World War II, Ingarden switched from writing in German to writing in Polish, as a gesture of solidarity, with the result that until recently his major works went largely unnoticed by the wider philosophical community. Ingarden studied under Edmund Husserl and developed phenomenology in a variety of fields, such as ontology, epistemology, aesthetics, and axiology.

Ingarden was critical to positivism and all forms of relativism, including historicism and psychologism. He argued for the reality of values and criticized them as perspectives which undermine social values. Ingarden is best known, however, for his work in aesthetics, particularly on the ontology of the work of art and the status of aesthetic values, and is credited with being the founder of phenomenological aesthetics. His work, The Literary Work of Art, has been widely influential in literary theory as well as philosophical aesthetics.

Roman Witold Ingarden was born on February 5, 1893, in Kraków, Poland. As an Austrian subject during Austria's last occupation of Southern Poland, he initially studied mathematics and philosophy under the guidance of Kazimierz Twardowski (who, like Husserl, was a student of Franz Brentano) in Lwów, and in 1912, moved to Göttingen to study philosophy under Edmund Husserl. Husserl considered Ingarden one of his best students, and Ingarden followed him to Freiburg, where he submitted his doctoral dissertation, Intuition und Intellekt bei Henri Bergson, in 1917, for which he received his Ph.D. in 1918, with Husserl as director. The two remained in close contact until Husserl's death, in 1938.

After receiving his doctoral degree, Ingarden returned to Poland for most of his academic career. At first he taught mathematics, psychology, and philosophy in schools and worked on his Habilitationschrift. Published as Essentiale Fragen, in 1925, it attracted some attention in the English-speaking philosophical world, and was reviewed twice in Mind (by A.C. Ewing in 1926, and by Gilbert Ryle in 1927). With the publication of Habilitationschrift, Ingarden was appointed as Privatdozent at the Jan Kazimierz University in Lvóv, where he was promoted to Professor in 1933. During this time, his most well known work, The Literary Work of Art, was first published (1926; 1931, in German), followed by The Cognition of the Literary Work (1936, in Polish). His academic career was interrupted from 1941-1944 when Lwów University was closed because of World War II, and during this period he secretly taught philosophy at the university, and mathematics to secondary school children in an orphanage. At the same time, and despite the bombing of his house in Lvóv, Ingarden was working intensively on his greatest work, The Controversy over the Existence of the World (the first two volumes of which were published in Polish in 1947 and 1948, respectively).

After the war, in 1945, Ingarden was offered a position at Jagiellonian University in Kraków. In 1949, however, he was banned from teaching due to his alleged idealism and for being an "enemy of materialism." The ban continued until 1957, when Ingarden was reappointed to his post at Jagellonian University, where he taught until his retirement in 1963, and continued to write, publishing such works as The Ontology of the Work of Art (1962) and Experience, Artwork and Value (1969). Ingarden died suddenly of a cerebral hemorrhage on June 14, 1970, while still fully engaged in his philosophical projects.

Ingarden's best-known and most influential work, especially in the English-speaking world, is The Literary Work of Art, written around 1926, and first published in German in 1931. It appeared in German early in his career and had a broad impact, with the result that Ingarden’s work on aesthetics has received much more attention than his theories on ontology, which were the real focus of his philosophical work. This is partially due to the relative isolation of academic philosophy in Poland during World War II and the Soviet occupation, and also to language barriers. During World War II, as a gesture of solidarity, Ingarden switched from writing in German to writing in Polish, a language which few western Europeans read. His major work in ontology, The Controversy, was not translated into German until 1964, and (except for a small part, printed under the title, Time and Modes of Being) is still unavailable in English. Consequently, his work was largely unacknowledged among western European and Anglo-American philosophers.

Ingarden produced a large body of work in epistemology, ontology, metaphysics, phenomenology, and value theory. In 1934, he was one of the first to make the classic criticism of logical positivism, that the verifiability criterion of meaning is itself unverifiable. Ingarden’s work in aesthetics was inspired by his interest in the problem of realism versus idealism, and his works in literary fiction and the ontology of art were developed as part of a larger argument against Husserl's "transcendental phenomenology." Ingarden wanted to emphasize the objective "real" entities that exist independently of the human mind, and the social and cultural entities, “purely intentional objects” that owe their existence to human consciousness. He wished to demonstrate that the “real world” cannot be regarded as a purely intentional object owing its existence to human consciousness.

Ingarden was a realist phenomenologist; his work was focused more on discovering how objects evoked particular experiences in the human mind, rather than on examining the structure of the human consciousness. He emphasized that phenomenology employs a variety of cognitive methods according to a variety of types of objects. Assuming that there are essential correlations between kinds of objects and the ways in which they can be known to the human mind, he set out to determine the ontological structure and status of various types of objects by examining the cognitive experiences through which the human mind acquires knowledge of those objects. He developed an ontological framework, unmatched in scope and detail, that allowed not only for independent physical reality and for human consciousness, but for the wide variety of “objects” in everyday human life that owe their existence to both.

A student of Edmund Husserl's from the Göttingen period, Ingarden admired him deeply, but could not accept his apparent turn from the realism of Logical Investigations to a transcendental idealist orientation exhibited in Ideas. The two frequently debated this topic in letter and in person during the period from 1918 until Hursserl’s death in 1938; their philosophical correspondence was eventually published as Husserl's Briefe an Roman Ingarden.

Ingarden’s rejection of Husserl's transcendental phenomenology determined the course of his philosophical work, and in 1961 he described this concern as one “which has been in fact occupying my entire scholarly life” (“Letter,” 437).

The Literary Work of Art

The Literary Work of Art, written around 1926, and published in German in 1931, was Ingarden’s best-known and most influential work, especially in the English-speaking world. He conceived it as an argument against transcendental phenomenology of Husserl, a preliminary study for The Controversy over the Existence of the World. It was fundamentally a work in ontology, identifying the essential features of any literary work, its necessary parts, and how they are interrelated; and how entities such as literary works interrelate with other sorts of entities such as authors, copies of texts, readers, and ideal meanings.

The Literary Work of Art has been particularly influential in literary studies. It's influence is seen in Wolfgang Kayser's work, Das sprachliche Kunstwerk; and in the work of such theorists as René Wellek and Wolfgang Iser, who developed of the schools of New Criticism and Reader Response Theory, respectively.

The Musical Work, The Picture, The Architectural Work

In 1928, immediately after writing The Literary Work of Art, Ingarden wrote a series of essays, originally intended as an appendix to The Literary Work of Art, extending his analysis of the ontology of literature to music, painting, and architecture. The appendix, however, was not published along with The Literary Work of Art, and remained dormant until after the war, when, in 1946, the essays on the picture and the architectural work were published in Polish. The three studies were expanded and finally published in German in 1961, along with an article on film, and were not translated into English until 1989. They address many of the same ontological issues as those debated in modern "analytic" aesthetics, and provide compelling arguments against many popular positions and also analyses, unsurpassed in subtlety and detail, of the ontological structure of works of various kinds.

The Architectural Work suggests how Ingarden's ontological examination of works of art may be used to form the framework for a general theory of social and cultural objects, and their relations to the more basic physical objects of the natural sciences. He argued that an architectural structure was not a mere independent "real" object, though it was made of stones and appeared to be as "real" as the rivers around it and the land on which it was built. Its existence as an architectural work required not only its creation by an architect (rather than its coming into existence as a mere natural formation), but also the "reconstructive acts of the viewer" in taking up a certain attitude towards the real object and helping co-constitute its aesthetic and even its sensible properties. A work of architecture was in this sense a doubly-founded object, which “refers back not only to the creative acts of the architect and the reconstructive acts of the viewer, but also to its ontic foundation in a fully determined real thing shaped in a particular way” (Ontology, 263).

Retrieved from https://www.newworldencyclopedia.org/p/index.php?title=Roman_Ingarden&oldid=1091639
Categories:
Hidden category:
This page was last edited on 16 December 2022, at 04:50.
Content is available under Creative Commons Attribution/Share-Alike License; additional terms may apply. See Terms of Use for details.