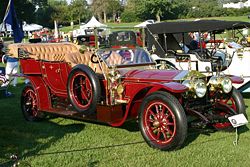 Rolls-Royce Limited was an English car and, later, aero-engine manufacturing company founded by Sir Henry Royce and Charles Stewart Rolls on March 15, 1906, and was the result of a partnership formed in 1904. Royce was the engineer and designer, Rolls—the son of a Baron—was the business manager and had experience of promoting the sale of cars. In 1971, Rolls-Royce was crippled by the development of the advanced RB211 jet engine, resulting in the nationalization of the company. In 1973, the car division was separated from Rolls-Royce Limited as Rolls-Royce Motors. Rolls-Royce Limited continued as a nationalized company until it was privatized in 1987 as Rolls-Royce plc. Headquarters are in London. Rolls-Royce planes powered Allied planes in World War I. In World War II, engines built by the company made a material contribution to the war effort as they powered the Spitfire and the Hawker Hurricane in their Battle of Britain confrontation against the German Messerschmitt and Junkers.

Royce, the company's co-founder, did not have the advantage of a wealthy family or the privilege of an elite education, but created one of the best known automobiles through hard work, and by applying his engineering skills gained as an apprentice on the factory floor. Although not usually regarded as a racing car, Rolls Royce engines famously set several world speed records in cars driven by Sir Malcolm Campbell. As the largest supplier of engines to civilian aircraft in the world, the company facilitates global travel and global exchange in today's world. The company's name and products are synonymous with engineering precision and excellence around the world. 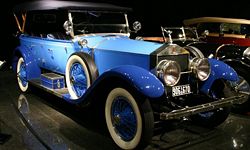 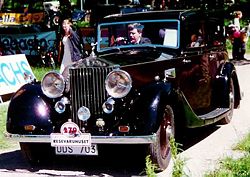 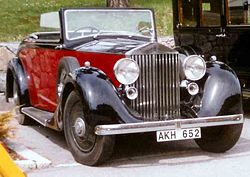 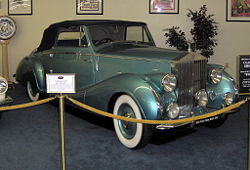 One of the first postwar Rolls-Royce models (1947) 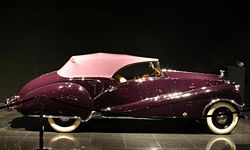 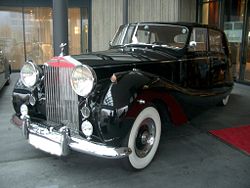 In 1884, Frederick Henry Royce started an electrical and mechanical business. He made his first car, a "Royce," in his Manchester factory in 1904. He was introduced to The Honourable Charles Stewart Rolls, the Eton and Cambridge educated son of the First Baron Llangattock at the Midland Hotel in Manchester on May 4 of that year, and the pair agreed to a deal where Royce would manufacture cars, to be sold exclusively by Rolls. Rolls was already importing and selling French cars and had established one of the first successful car dealerships in England. He had considerable business acumen. A clause was added to the contract stipulating the cars would be called "Rolls-Royce." The company was formed on March 15, 1906, and moved to Derby in 1908. The partnership was fruitful. Royce not only designed to a high standard, but insisted that high standards were maintained by his employees and instituted a system of quality control. Rolls was also an amateur pilot (which may have influenced Royce to turn to aircraft engine design) and broke several records. Tragically, he died in a plane crash on June 2, 1910.

The Silver Ghost (1906-1925) was responsible for the company's early reputation. It had a 6-cylinder engine; 6173 cars were built. In 1921, the company opened a second factory in Springfield, Massachusetts (in the United States to help meet demand), where a further 1701 "Springfield Ghosts" were built. This factory operated for ten years, closing in 1931. Its chassis was used as a basis for the first British armored car used in both world wars.

In 1931, the company acquired rival car maker Bentley, whose finances were unable to weather the Great Depression. From then until 2002, Bentley and Rolls-Royce cars were often identical apart from the radiator grille and minor details.

In 1933, the color of the Rolls-Royce radiator monogram was changed from red to black because the red sometimes clashed with the coachwork color selected by clients, and not as a mark of respect for the passing of Royce as is commonly stated.

Rolls-Royce and Bentley car production moved to Crewe in 1946, and also to Mulliner Park Ward, London, in 1959, as the company started to build bodies for its cars for the first time: previously it had built only the chassis, leaving the bodies to specialist coachbuilders.

The company's first aero engine was the Eagle, built from 1914. Around half the aircraft engines used by the Allies in World War I were made by Rolls-Royce. By the late 1920s, aero engines made up most of Rolls-Royce's business.

Henry Royce's last design was the Merlin aero engine, which came out in 1935, although he had died in 1933. This was developed after the R engine, which had powered a record-breaking Supermarine S6B seaplane to almost 400 mph in the 1931 Schneider Trophy. The Merlin was a powerful V12 engine and was fitted into many World War II aircraft: the British Hawker Hurricane, Supermarine Spitfire, De Havilland Mosquito (two-engine), Avro Lancaster (four-engine), Vickers Wellington (two-engine); it also transformed the American P-51 Mustang into possibly the best fighter of its time, its Merlin engine built by Packard under licence. Over 160,000 Merlin engines were produced. The Merlin crossed over into military vehicle use as the Meteor powering the Centurion tank among others.

In the post-World War II period Rolls-Royce made significant advances in gas turbine engine design and manufacture. The Dart and Tyne turboprop engines were particularly important, enabling airlines to cut times for shorter journeys while jet airliners were introduced on longer services. The Dart engine was used in Argosy, Avro 748, Friendship, Herald and Viscount aircraft, whilst the more powerful Tyne powered the Atlantic, Transall and Vanguard, and the SRN-4 hovercraft. Many of these turboprops are still in service.

Amongst the jet engines of this period was the RB163 Spey, which powers the Hawker Siddeley Trident, BAC One-Eleven, Grumman Gulfstream II and Fokker F28.

During the late 1950s and 1960s there was a significant rationalisation of all aspects of British aerospace and this included aero-engine manufacturers, culminating in the merger of Rolls-Royce and Bristol Siddeley in 1966 (Bristol Siddeley had itself resulted from the merger of Armstrong Siddeley and Bristol in 1959). Bristol Siddeley, with its principal factory at Filton, near Bristol, had a strong base in military engines, including the Olympus, Viper, Pegasus and Orpheus. They also manufactured the Olympus 593 Mk610 for Concorde.

Rolls-Royce started to produce diesel engines in 1951. Initially, these were intended for heavy tractors and earth-movers but, later, they were installed in lorries (e.g. Scammell), railcars, diesel multiple units and Sentinel shunting locomotives. The railcar engines were often used with Twin Disc torque converters which were built by Rolls-Royce under license from the Twin Disc Clutch Company of the USA. Rolls-Royce took over Sentinel's Shrewsbury factory for diesel engine production in 1956.

Financial problems caused largely by development of the new RB211 turbofan engine led—after several cash subsidies—to the company being nationalized by the Heath government in 1971. (Delay in production of the RB211 engine has been blamed for the failure of the technically advanced Lockheed TriStar, which was beaten to launch by its chief competitor, the Douglas DC-10.)

In 1973 the automobile business was spun off as a separate entity, Rolls-Royce Motors. The main business of aircraft and marine engines remained in public ownership until 1987, when it was privatized as Rolls-Royce plc, one of many privatizations of the Thatcher government.

Retrieved from https://www.newworldencyclopedia.org/p/index.php?title=Rolls-Royce,_Ltd.&oldid=1091626
Categories:
Hidden category:
This page was last edited on 16 December 2022, at 02:47.
Content is available under Creative Commons Attribution/Share-Alike License; additional terms may apply. See Terms of Use for details.