The Ptolemaic dynasty (sometimes also known as the Lagids, from the name of Ptolemy I's father, Lagus) was a Hellenistic Macedonian royal family which ruled the Ptolemaic Empire in Egypt for nearly 300 years, from 305 B.C.E. to 30 B.C.E. Ptolemy, a somatophylax, one of the seven bodyguards who served as Alexander the Great's generals and deputies, was appointed satrap (Governor) of Egypt after Alexander's death in 323 B.C.E. In 305 B.C.E., he declared himself King Ptolemy I, later known as "Soter" (savior). The Egyptians soon accepted the Ptolemies as the successors to the pharaohs of independent Egypt. Ptolemy's family ruled Egypt until the Roman conquest of 30 B.C.E. All the male rulers of the dynasty took the name Ptolemy. Ptolemaic queens, some of whom were the sisters of their husbands, were usually called Cleopatra, Arsinoe, or Berenice. The most famous member of the line was the last queen, Cleopatra VII, known for her role in the Roman political battles between Julius Caesar and Pompey, and later between Octavian and Mark Antony. Her suicide at the conquest by Rome marked the end of Ptolemaic rule in Egypt. Chauveau says that the "ever increasing importance assumed by its women" was a distinctive feature of the Ptolemaic dynasty.[1]

A flourishing center of learning and scholarship, Ptolemaic Egypt gave the world the Greek translation of the Hebrew Bible, important developments in mathematics and medicine and its greatest library, sadly destroyed. The Ptolemies continued Alexander the Great's practice of cultural fusion, blending Greek and Egyptian customs and beliefs and practices together, creating a synthesis that remains a subject for study and research. This society did not implode or collapse due to any type of internal weakness but fell to a superior military power. This cultural synthesis inspired the work of the Jewish philosopher, Philo of Alexandria as it did the cultural context in which gnosticism later flourished.[2] Against the view of some that multiculturalism is a chimera, the Ptolemaic period of Egypt's history can be examined as an example of a flourishing, vibrant polity.[3]

The dates in brackets are regal dates for the kings. They frequently ruled jointly with their wives, who were often also their sisters. Several queens exercised regal authority, but the most famous and successful was Cleopatra VII (51 B.C.E.-30 B.C.E.), with her two brothers and her son as successive nominal co-rulers. Several systems exist for numbering the later rulers; the one used here is the one most widely used by modern scholars. Dates are years of reign.

Many of the relationships shown in this tree are controversial.

Other members of the Ptolemaic dynasty 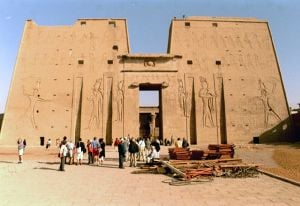 Alexander the Great built the city of Alexandria and began to collect books to establish a library. This project was continued by the Ptolemies, who transformed Alexandria into a leading cultural center. The Alexandria Library became the most famous and important in the ancient Meditaerranean world. The Ptolemies adapted many aspects of Egyptian life and customs, claiming the title of Pharaoh and being recognized by the population as the their legitimate successors and the 31st Dynasty. They took part in Egyptian religious practices and were depicted on monuments in Egyptian dress. They constructed Temples, which were often consecrated during their state visits to the provinces.[4] These Temples include those at Edfu, Deir el-Medina and one in Luxor. Learning flourished and a synthesis between Greek and Egyptian culture developed. In this, the Ptolemies continued Alexander's project of cultural fusion. Like the Pharaohs, they claimed to be sons and daughters of the Sun God, Ra. They not only called themselves Pharaoh but used all the titles of the earlier Egyptian rulers. Alexandria was also an economic center of significance. It was from Egypt of the Ptolemaic dynasty that the cult of Isis spread throughout the Roman Empire.[5]

During the Ptolemaic period, the Septuagint, the Greek translation of the Hebrew bible, was produced in Alexandria, which was also an important center for Jewish life. This translation was undergone at the request of the Ptolemaic Pharaoh. In its turn, it stimulated "and nourished the discipline of exegesis, which would so profoundly mark the development of both Judaism and Christianity."[6] Towards the very end of the Ptolemaic period, the Jewish philosopher Philo (20 B.C.E.-50 C.E.) set out to fuse Jewish and Greek thought. Euclid of Alexandria (325-265 B.C.E.) and Archimedes of Syracuse (287-212 B.C.E.) were among Alexandria's most distinguished scholars. Philometer VI had a Jewish tutor, the famous Aristobulus. During the reign of Ptolemy V, new critical editions of Homer, Hesiod and Pindar were produced at the great library.[7] It was also in Alexandria that the writings on medicine that "form our Hippocratic Corpus were first brought together."[8]

There were revolts due to a succession of incompetent rulers. However, it was Rome's strength rather than Egypt's weakness that brought about the end of the Ptolemaic period. After defeating Carthage in the Punic Wars, Roman power was on the ascendancy. When Cleopatra became Queen, Roman expansion was unstoppable.

Hoelbl writes that "The Ptolemaic period has provided us with a great cultural legacy in the form of the impressive temples and Alexandrian scholarship which we still enjoy."[9] The main value of the Ptolemaic legacy lies in its fusion of Greek and Egyptian culture, producing what was effectively a bi-cultural civilization. This civilization did not collapse or implode but eventually fell to the Romans due to their superior military strength. For nearly three centuries, Ptolemaic Egypt was a vibrant, productive, creative and in the main peaceful center of learning, commerce and trade in the Ancient world. In contrast, Samuel P. Huntington's Clash of the Civilizations thesis argues that no society that straddles across cultures, which does not identify with a single culture, can thrive. History, he says "shows that no country so constituted can … endure."[10]