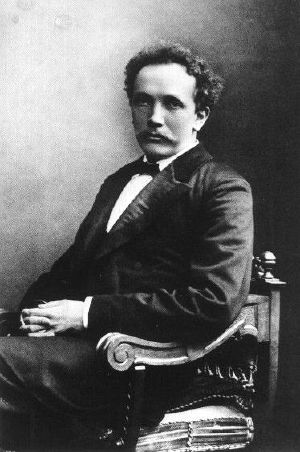 Richard Strauss was one of the Romantic period's most adept practitioners of program music.

Program music is music that is based on a specific narrative and, as such, is intended to evoke extra-musical ideas or images in the mind of the listener, by musically depicting a scene, theme, events, or literary text. By contrast, absolute music stands for itself and is intended to be appreciated without any extra-musical narrative or connotations.

Program music refers almost exclusively to works in the European classical music tradition, particularly those from the Romantic period of the nineteenth century, when the concept was popular. The "tone poem" of the Romantic era is an example of a form of program music. However, pieces which fit the description have long been a part of music from the eighteenth century. The term is usually reserved for purely instrumental works, and not for opera or songs. In contemporary music, the tradition of program music remains very much alive, for example, in movie soundtracks, in which composers strive to evoke a specific emotional response from listeners in keeping with the program of the film.

Composers of the Renaissance wrote a fair amount of program music, especially for the harpsichord, including works such as Martin Peerson's The Fall of the Leafe and William Byrd's The Battell. For the latter work, the composer provided the following written description of the sections, indicating their programmatic themes: "Souldiers sommons, marche of footemen, marche of horsmen, trumpetts, Irishe marche, bagpipe and the drone, flute and the droome, marche to the fighte, the battels be joyned, retreat, galliarde for the victorie."

Antonio Vivaldi's The Four Seasons is a well known work of program music.

Probably the most famous work of the Baroque era is Antonio Vivaldi's The Four Seasons, a set of four concertos for violin and string orchestra that illustrates the seasons of the year with rain, buzzing flies, chilly winds, treading on ice, dancing peasants, and so on. The program of the work is made explicit in a sequence of four sonnets written by the composer.

Another well-known Baroque program work is Johann Sebastian Bach's Capriccio on the Departure of a Beloved Brother, BWV 992, whose sections have charming descriptive titles such as: "Friends gather and try to dissuade him from departing," "They picture the dangers which may befall him," "The Friends' Lament," "Since he cannot be dissuaded, they say farewell," "Aria of the Postilion," and "Fugue in Imitation of the Postilion's horn."

Program music was less often composed in the Classical era. At this time, perhaps more than any other, music achieved drama from its own internal resources, notably in works written in sonata form. It is thought, however, that a number of Joseph Haydn's earlier symphonies may be program music. For example, the composer once said that one of his earlier symphonies represents "a dialogue between God and the Sinner." The classical-era composer Karl Ditters von Dittersdorf wrote a series of symphonies based on Ovid's Metamorphoses (not to be confused with twentieth-century composer Benjamin Britten's Six Metamorphoses after Ovid).

Ludwig van Beethoven felt a certain reluctance in writing program music, and said of his 1808 Symphony No. 6 (Pastoral) that the "whole work can be perceived without description—it is more an expression of feelings rather than tone-painting." Yet the work clearly contains depictions of bird calls, a babbling brook, a storm, and so on. Beethoven later returned to program music with his Piano Sonata Op. 81a, Les Adieux, which depicts the departure and return of his close friend, Archduke Rudolph.

Program music particularly flourished in the Romantic era. A significant reason for this was the influence of literature and folklore on composers in the nineteenth century. The symphonic poem (also known an tone poem), usually a single-movement orchestral form that develops a poetic idea, tells a story, suggests a scene or creates a mood, became the most prominent vehicle for program music in the Romantic era.

As it can invoke in the listener a specific experience beyond that of sitting and listening of musicians, program music is related to the purely Romantic idea of the Gesamtkunstwerk, a performance encompassing music, theater, and the visual arts. Composers believed that the dynamics of sound that were newly possible in the Romantic orchestra of the era allowed them to focus on emotions and other intangible aspects of life much more than during the Baroque or Classical eras.

Franz Liszt was the inventor of the form of program music known as the symphonic poem.

Hector Berlioz's Symphonie Fantastique was a musical narration of a hyperbolically emotional love story that he wrote himself. Franz Liszt provided explicit programs for many of his piano pieces, and he is also the inventor of the symphonic poem. In 1874, Modest Mussorgsky used only the dynamic range of one piano to compose a series of pieces describing seeing a gallery of ten of his friend's paintings and drawings. Entitled Pictures at an Exhibition, this piece was later fully orchestrated by Maurice Ravel. The French composer Camille Saint-Saëns wrote many short pieces of program music which he called Tone Poems. His most famous are probably the Danse Macabre and several movements from the Carnival of the Animals. The composer Paul Dukas is known for his tone poem The Sorcerer's Apprentice, based on a tale from Goethe.

The tone poem entitled The Moldau by Smetana depicts the Czechoslovakian river as it leaves its birthplace as two small but vibrant springs, winding its way through the countryside and villages, proceeding eventually through the turbulence of the crashing of waves of rapids and to the final calm of the open sea. Smetana used a richness and sensuality of sound to obtain a variety of atmospheres and moods in his program music.

Possibly the most adept at musical depiction in his program music was the German composer Richard Strauss, whose symphonic poems include: Tod und Verklärung (portraying a dying man and his entry into heaven), Don Juan (based on the ancient legend of Don Juan), Till Eulenspiegels lustige Streiche (based on episodes in the career of the legendary German figure Till Eulenspiegel), Don Quixote (portraying episodes in the life of Cervantes' character, Don Quixote), Ein Heldenleben (which depicts episodes in the life of an unnamed hero often taken to be Strauss himself), and Sinfonia Domestica (which portrays episodes in the composer's own married life, including putting the baby to bed). Strauss is reported to have said that music can describe anything, even a teaspoon![1]

Several of Gustav Mahler's symphonies have programmatic connotations. In the finale of his sixth symphony there are three climatic moments which are marked by fierce hammer blows which signified (according to his widow, Alma) the death of his daughter, the diagnosis of his heart condition (which would become fatal) and his forced resignation at the director of the Vienna Opera.

In the twentieth century, Alban Berg's Lyric Suite was thought for years to be abstract music, but in 1977 it was discovered that it was in fact dedicated to Hanna Fuchs-Robettin.[2] Important leitmotifs are based the melodic series A–B–H–F, which is their combined initials. The last movement also contains a setting of a poem by Baudelaire, suppressed by the composer for publication.[2]

French composer Olivier Messiaen used bird song as the basis for his work Chroncromie, but this there is no program or narrative to speak of. Paul Hindemith's 1934 symphony, Mathis der Maler, is an orchestral work extracted from his opera of the same name and is based on three paintings by the sixteenth century German painter Mathias Grunewald's (the opera's protagonist) Isenheim altarpiece.

The word "program music" is not normally used in speaking of popular music, but the tradition of purely orchestral program music is continued in pieces for jazz orchestra, most notably several pieces by Duke Ellington. Instrumental pieces in popular music often have a descriptive title which suggests that they could be categorized as program music, and several instrumental albums are completely devoted to some programmatic idea (for example, China by Vangelis or The Songs of Distant Earth by Mike Oldfield).

Some genres of popular music are more likely than others to involve programmatic elements. These include ambient, new age, surf rock, jazz fusion, progressive rock, art rock and various genres of techno music.

Progressive rock groups and musicians during the 1970s in particular experimented with program music, among which was Rush's Jacob's Ladder (1980), which shows clear influences of Smetana's Má vlast ("My Homeland") (1874-1879). The English trio, Emerson, Lake and Palmer produced a version of Modeste Mussorgsky's Pictures at an Exhibition.

Is all music program music?

Some theorists argue that there is indeed no such thing as true "absolute music" and that music always conveys or evokes emotions. While non-professional listeners often claim that music has meaning (to them), "new" musicologists, such as Susan McClary (1999), argue that so-called "abstract" techniques and structures are actually highly politically and socially charged, even gendered. This may be linked to a more general argument against abstraction, such as Mark Johnson's argument that it is, "necessary...for abstract meaning...to have a bodily basis." (McClary, 1991) However, a more loosely specific definition of absolute music as music which was not composed with a programmatic intent or plan in mind may be adopted. Others argue that music may convey or express certain images or moods quite apart from what the composer intended.

More traditional listeners often reject these views sharply, asserting that music can be meaningful, as well as deeply emotional, while being essentially about itself (notes, themes, keys, and so on), and without any connection to the political and societal conflicts of our own day.

As such, most classical music is absolute music, as is suggested by titles which often consist simply of the type of composition, a numerical designation within the composer's oeuvre, and its key. Bach's Concerto for Two Harpsichords in C Minor, BWV 1060; Mozart's Piano Sonata in C Major, K. 545, and Beethoven's Symphony No. 7 in A major (Opus 92) are all examples of absolute music. While the debate is of interest to many, for practical purposes most scholars use the term "program music" in the narrower sense described above.

The importance of program music

The concept of program music was particularly attractive to composers who wanted to pair their music to a story, an idea, a scene or a poem. Such music had qualities to suggest or evoke an image, whether it was a mere imitation of natural sounds, i.e. bird calls, or using descriptive melodies, harmonies or rhythms to create a mood, emotion or atmosphere for a story, idea, scene or poetic connotation, i.e. the flowing of a river to the sea. It is the combination of various arts into one which inspires descriptive music from coloristic resources.