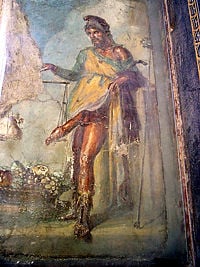 Fresco of Priapus, House of the Vettii, Pompeii.

In Greek mythology, Priapus (Greek: Πρίαπος) was a minor rustic fertility god, protector of livestock, fruit plants, gardens and male genitalia. He was most famous for this later attribute, which was clearly the focal point of his depictions, as well as the subsequent myths and literature that centered around his largely phallic character. His mother was Aphrodite and father Hermes (or Dionysus depending on the different classical sources).[1]

The worship of Priapus seems to have originated east of ancient Greece in the general region surrounding the Hellespont, a narrow strait now known by the European name the Dardanelles. Reverence of phallic deities was widespread in the ancient world and the influence of neighboring phallic gods on the worship of the ithyphallic deity Priapus may have contributed to the growth of the cult. Indeed, Priapus' non-Greek origin is suggested in art and sculpture by the Persian cap that he often wears in artistic depictions.

The ancient Greeks widely believed that Priapus had been born in the city of Lampsacus on the Hellespont. Here sacrifices of donkeys were made in his honor, probably because of the sexual prowess that the Greeks attributed to this animal. The people of Lampsacus revered Priapus more than any other god and identified him as a son of Dionysus and Aphrodite.[2] By the end of the third century B.C.E., Priapus' image was found on coins in this region.[3]

The influence of Priapus most likely spread beyond the Hellespont and into the remainder of the Greek world due to the conquests of Alexander the Great.[4] The god's popularity remained strong until well into the Apostolic era, which is attested to by the early Christian apologist Arnobius, who mockingly mentions "the Hellespontian Priapus bearing about among the goddesses, virgin and matron, those parts ever prepared for encounter."[5]

Priapus was said to be a son of Aphrodite, the goddess of love, or in some cases, Chione, a snow nymph. His father was variously given as Hermes, Dionysus, Pan or Adonis.[6] Hera, the wife of Zeus, out of a mix of outrage and jealousy with Aphrodite's promiscuity, cursed Priapus with enormous genitals. His mother promptly abandoned the child, and he was raised by shepherds. Priapus would go on to find favour with Hera later in his adult life, as the queen of the gods went on to appoint him as dancing instructor for her infant son Ares, the eventual god of war.

In Ovid's Fasti,[7] the nymph Lotis fell into a drunk slumber along with the rest of the gods and goddesses after a great feast, and Priapus used this opportunity to advance upon her. With stealth he approached but before he could ensnare her in a loving embrace, Silenus' donkey alerted the party of his presence with cacophonous braying. Lotis awoke, and a startled Priapus ran away sheepishly; thereafter Priapus slaughtered the donkey for spoiling his opportunity. Ovid's anecdote served to explain why donkeys were sacrificed to Priapus in the city of Lampsacus.[8] Dionysus eventually placed the dead ass in heaven as one of two stars referred to as "The Asses."[9]

In later versions of the story, Lotis is replaced with the virginal Hestia, the goddess responsible for the hearth. This attempted violation of Hestia, the personification of domesticity, perhaps hints towards the immensely disruptive effects of the dionysian and aphrodisiac natures upon family life when combined.[10]

Statues and images of Priapus typically show a well-built, bearded man distinguishable by way of his enormous, erect penis, usually colored red. Crude sculptures of Priapus were often carved from cheap logs by the laity, while more elaborate stone statues and paintings were commissioned by the aristocracy. Such sculptures were placed in gardens and fields in the hopes of guaranteeing abundant crops, as the large phallus was taken to symbolize generation and fecundity. Farmers worshiped Priapus in the hope that he would bestow great bounties of grains and vegetables upon them. As such, the first fruits of the farm were often sacrificed to him as a sign of gratitude for the agricultural boons he granted. In this function as a bestower of plenty, in addition to presiding over crops, Priapus was also thought to preside over flocks of sheep, vineyards, and the acts of fishing and raising bees. He is also depicted with a pruning knife, illustrating his additional function as pruner of the pear-tree (related to Hera), and occasionally wears a Persian cap.

Statues of Priapus also served as guardians of homes, fields, and crops, providing a "no trespassing" sign, of sorts. In this case, Priapus represented the threat of violent rape, a common punitive measure in the ancient world. Epigrams inscribed upon these statues, later collected in Priapeia (see below), show Priapus using sodomy as a warning toward transgressors of the boundaries he protected much like a herm (a boundary marker):

Whosoever steals a rosebud
or absconds with herb or apple,
hateful to both boys and women
let him burst from such a stiffness
as you notice in my middle (...)[11]

For the Romans, Priapus' statue was also used as a scarecrow or as a rack for a scythe. Lucian reports that in the Roman province of Bithynia, Priapus was more commonly identified as a warlike god due to his mythological function as tutor to the infant Ares.[12]

A number of notable icons depicting Priapus existed throughout ancient Greece and Rome. For instance, the travel-writer Pausanias noted that a statue of Priapus at Mount Helicon in Boeotia was "worth seeing."[13] One of the most famous images of Priapus that is still extant is that from the House of the Vettii in Pompeii. This particular image is a wall fresco in which Priapus is weighing his phallus against a bag full of money. By all indications, it appears that his phallus is heavier (see image above).

The epigrams found upon statues of Priapus were compiled in the Priapeia, a collection of unknown authorship written in Latin. This collection illustrates the various ways in which poets invented comic and obscene situations for Priapus, including monologues in which the god congratulates himself for the size and virility of his prodigious member. This collection gave him more literary prominence than he had ever enjoyed in rites or cult. Some scholars used the Priapeia as primary evidence toward the conclusion that in the ancient world, large penises were generally considered comical rather than attractive. Priapus' large penis, they posited, ensured that no woman wanted to sleep with him, whilst his curious phallus warned potential burglars that their punitive rape would be extremely painful.

However, this theory is not supported by all of the literary evidence available. For example, in the Satyricon of Petronius, when the heroes arrive in Croton in Sicily, they come across a youth who is exposed and found to be very well endowed. As a result the townspeople, including the women, hold him in reverence and literally trip over each other to touch his phallus for good luck. In this instance there does not seem to be any indication that the youth's unnaturally large phallus is regarded with disgust, but rather with much auspiciousness. It cannot therefore be decidedly concluded what the Greek classical view of penis size may have been. In the case of art and sculpture it seems likely that an average or smaller size was preferred, but this does not preclude the possibility that the public held different views. Thus, Priapus' large genitals were just as likely to have been an alluring symbol of fecundity as they were the subject of lighthearted scorn.

Although no longer worshipped, Priapus has remained a recurrent subject of allusion in literature, mythology, religion and even medicine throughout history. Richard Payne Knight, in his 1786 work An Account of the Remains of the Worship of Priapus, identified Priapus-worship as surviving in Catholic phallic votives offered throughout parts of Italy during the eighteenth century. Priapus is also recognized as a saint by members of the Ecclesia Gnostica Catholica, a branch of Ordo Templi Orientis upholding the philosophy of French author François Rabelais and occultist Aleister Crowley. In the field of medical science, the rare condition known as priapism, in which a male suffers persistent tumescence of the penis even in the absence of sexual desire, gets its name from Priapus.