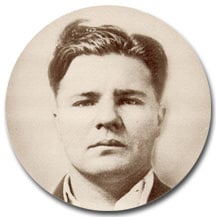 Charles Arthur "Pretty Boy" Floyd (February 3, 1904 – October 22, 1934) was an American bank robber and alleged killer, romanticized by the press and by folk singer Woody Guthrie, in his song "Pretty Boy Floyd." Pretty Boy Floyd is one of several gangsters and criminals whose exploits have nonetheless earned them a place in the collective memory of a nation. Given that he was active during the Great Depression, his alleged popularity with locals who protected him from the police could be explained as an expression of a general discontentment with, even hatred of, the Banking system. His reputation for generosity to the poor, which forms part of the romanticization of his story, transforms his legacy into that of a Robin Hood-type crusader, taking from the rich, giving to the needy.

Floyd was born in Adairsville, Georgia, on February 3, 1904, where his family lived until he was about ten years old. They then moved to Sequoya County, near the town of Hanson, in the Cookson Hills section of Oklahoma, in 1911, when Floyd was around 11 years old.[1] Growing up, Floyd idolized past outlaws such as Henry "Bearcat" Starr, the Daltons, the Youngers, and his favorite, Jesse James. At the age of seventeen, Floyd married Lee Hargrove (also known as Robie or Bobbie). The popular history says that Floyd committed his first crime when he struck down a sheriff's deputy who had been rude, but contemporary sources agree that Floyd simply needed a way to make ends meet.[2]

The Time magazine of October 22, 1934, mentions a robbery of $350 in pennies from a local post office in 1922, as his first known crime. He was eighteen years old at the time. Three years later, he was busted for a payroll robbery in St. Louis, Missouri, and served three years in prison.

When paroled, he vowed that he would never see the inside of another prison. He did not, however, go straight. Partnering with more established criminals in the Kansas City underworld, he committed a series of bank robberies over the next several years; it was during this period that he earned the nickname "Pretty Boy." Like his contemporary, Baby Face Nelson, Floyd hated his nickname.

Their string of crimes hit a hiccup in Sylvania, Ohio, where they were caught in the midst of a bank robbery, and Floyd was sentenced to fifteen years. However, he escaped on his way to prison and rebuilt his gang. In the years that followed, he was blamed for a long string of bank robberies and vilified as a "Public Enemy" by the FBI.

The popular legend holds that he was not, in fact, responsible for all of these, and that his name was being attached to robberies committed by others. In the words of Woody Guthrie, "Every crime in Oklahoma was added to his name."

Floyd would hide out between crimes in towns near the one in which he had grown up, protected by the locals. The popular legend says that they did this out of love for his generosity and their hatred of the banks, which were at that time foreclosing on many farms. However, the contemporary press claimed that he simply bribed them for their silence.

With his partner, George Birdwell, Floyd robbed the banks in Earlsboro, Konawa, Maud, Morris, Shamrock, Tahlequah, and on December 12, 1931, two banks in one day at Castle and Paden, Oklahoma. Bank insurance rates doubled, and the governor of Oklahoma placed a $56,000 reward on Floyd.

The man was also accused of participating in the Kansas City Massacre, a shootout that resulted in the deaths of five men in 1933. He denied being there, but the authorities and the press were sure he was involved. Certainly the FBI maintains to this day that he was involved, though independent research argues he was not.[3]

After narrowly escaping ambush by the FBI several times, Floyd was killed on October 22, 1934, when FBI agents shot him near East Liverpool, Ohio. As is the case with many aspects of Floyd's life, the circumstances surrounding his final moments are disputed. According to the FBI, Floyd died cursing his killers to the end. However, Chester Smith, the sharpshooter who felled Floyd, stated in a 1984 interview that after he had (deliberately) wounded, but not killed Floyd. Smith claims that Melvin Purvis questioned him briefly and then ordered him shot at point-blank range. This is extremely controversial, because, if true, Purvis effectively executed Floyd without benefit of judge or jury.[4]

Floyd's body was placed on public display in Sallisaw, Oklahoma. His funeral was attended by between twenty and forty thousand people, and remains the largest funeral in Oklahoma history. He was buried in Akin, Oklahoma.

Floyd earned his nickname from the paymaster's description of him in his first major robbery as "a pretty boy." Though he hated it, it had staying power.

Five years after Floyd's death, Woody Guthrie wrote a ballad romanticizing his life of crime. This song has been performed by many of the great figures in country and folk music, like Joan Baez, and was recorded by Bob Dylan on the Smithsonian's tribute to Guthrie in 1988. The song plays up Floyd's generosity to the poor, and contains the very famous line:

Some will rob you with a six-gun,
And some with a fountain pen.

The song has also been covered by The Byrds on their album, Sweetheart of the Rodeo, by Wall of Voodoo, by folk-punk band Ghost Mice, by Alastair Moock on his album, Bad Moock Rising, and by Guthrie's son Arlo on his album Precious Friend with Pete Seeger.

It has been suggested that Flattop Jones, a villain from the Dick Tracy comic strip, was modeled on Floyd. Like the real-life figure, Flattop hailed from Oklahoma's Cookson Hills.

A film, Pretty Boy Floyd, was made in 1960 by Herbert J. Leder, starring John Ericson. Another film, A Bullet for Pretty Boy, was released in 1970, starring Fabian. He was also played by Steve Kanaly in the 1973 film Dillinger, and by Bo Hopkins in the 1975 TV-movie, The Kansas City Massacre. He was portrayed by Martin Sheen in the 1974 TV movie, The Story of Pretty Boy Floyd.

Pretty Boy Floyd is mentioned in Grandmaster Flash & the Furious Five's "The Message" ("Now you're unemployed, all null an' void; Walkin' round like you're Pretty Boy Floyd").

Many books have been written about Pretty Boy Floyd, including a semi-fictionalized biography by Pulitzer Prize-winner Larry McMurtry and Diana Ossana, in 1994. In this work, Floyd is sympathetically portrayed as a good natured man and a reluctant killer, popular with women but devoted to his family. He is more a victim of the poor social conditions of the time than a cold blooded criminal.

There were also two hair metal bands called Pretty Boy Floyd, a Canadian band that has broken up and an American band that is still together.

Floyd was mentioned in the novel The Grapes of Wrath by John Steinbeck, in which the mother of the Joad children claims that she knew Floyd's mother and is afraid that her son Tom might become as bitter and violent as Floyd.

Retrieved from https://www.newworldencyclopedia.org/p/index.php?title=Pretty_Boy_Floyd&oldid=1090308
Categories:
Hidden category:
This page was last edited on 30 November 2022, at 22:48.
Content is available under Creative Commons Attribution/Share-Alike License; additional terms may apply. See Terms of Use for details.