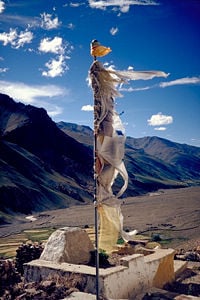 Prayer flags are colorful panels or rectangular cloths placed on single poles or strung along lines, on mountain ridges and peaks high in the Himalayas, on temples or homes. Prayer flags were used by Tibetans well before the arrival of Buddhism by Tibetan armies as regimental flags. Tibetan Shamans in the Bon tradition[1] adopted the flags into spiritual shaman rituals. Tibetan villagers adopted the shamanistic practice of prayer flags into their daily lives.[2]

Buddhism has always demonstrated its ability to adopt and absorb shamanistic rituals into its own spiritual practices. Shamanism, Daoism, and Buddhism have evolved together in a kindred relationship throughout the history of Buddhist expansion in Asia. After Buddhism arrived in Tibet as early as the fourth century B.C.E., monks adopted the shaman's colored flags into Tibetan Buddhist practice. These flags came to be seen as prayer flags, adopted into the very fabric of Tibetan Buddhist belief.[3] The prayer flags have retained their shaman uses to bring benefit and protection, including good health, and to invoke blessings on special events. Buddhist practitioners use the prayer flags to seek spiritual blessings including benefit in future reincarnations and the experience of Nirvana. The flags are often set at the highest places possible in the Himalayan mountains on single poles or strung on a line on houses. [4] When set on mountain peaks, the flags have a unique beauty. The wind that blows through them carries blessings to all sentient beings. When used in its most noble way, the beauty of these flags in the range of religious symbols and "tools" is that they do not function to bring blessing to those who place them, rather the one who puts them there does so for the sake of others.

The Indian Buddhist Sutras, written on cloth in India, were transmitted to other regions of the world.[5] Those sutras, written on banners, were the original prayer flags.[5] Legend ascribes the origin of the prayer flag to the Shakyamuni Buddha, whose prayers were written on battle flags used by the devas against their adversaries, the asuras.[6] The legend may have given the Indian bhikku a reason for carrying the 'heavenly' banner as a way of signifying his commitment to ahimsa.[7] Monks carried that knowledge into Tibet after 640 C.E., and the actual flags were introduced no later than 1040 C.E., where they underwent further modification.[7] The Indian monk Atisha (980-1054 C.E.) introduced the Indian practice of printing on cloth prayer flags to Tibet.[6]

Travelers from the West have written about the prayer flags in Tibet in accounts of their journeys.[8] Theos Bernard gave the following account in 1939:

My companions gave expression to glee upon reaching the summit, for it meant they were now in their native land, Tibet. They added some stones to the accumulating stone-mound, in accordance with the traveler's custom—a better custom, it seems to me, than our own, that of carving our initials—and gave vent to what would be analogous to our three cheers. On this stone pile countless "prayer-flags" are to be seen, an offering to the spirit of the mountain. If a Tibetan wants to offer a certain prayer, he may take several of these tiny flags and inscribe on them the desired prayer; these he erects then on the mound in the pass, and every time they wave in the wind his prayer is automatically repeated for him, conferring favor upon him with the Gods. The summit, by the way, is not a plateau, but a real summit, limited in space, and only permitting to walk along the narrow ridge round the stone pile.[9]

Lung Ta (horizontal) prayer flags, in square or rectangular shapes, are connected along their top edges to a long string or thread. They commonly hang on a diagonal line from high to low between two objects (e.g., a rock and the top of a pole) in high places such as the tops of temples, monasteries, stupas or mountain passes. Darchor (vertical) prayer flags are usually large single rectangles attached to poles along their vertical edge. Commonly planted in the ground, mountains, cairns or on rooftops, they are iconographically and symbolically related to the Dhvaja.

Traditionally, prayer flags come in sets of five, one in each of the five colors. The five colors represent the elements,[1]the Five Pure Lights, and are arranged from left to right in a specific order. Each of the elements is associated with a color for specific traditions, purposes and sadhana: The center of a prayer flag traditionally features a "Ta" (powerful or strong horse) bearing three flaming jewels (specifically ratna) on its back. The Ta symbolizes speed and the transformation of bad fortune to good fortune. The three flaming jewels symbolize the Buddha, the Dharma (Buddhist teachings), and the Sangha (Buddhist community), the three cornerstones of Tibetan philosophical tradition.

Approximately various versions of twenty traditional mantras (powerful ritual utterances) surround the Ta, each dedicated to a particular deity. In Tibetan religion, deities represent aspects of the divine manifest in each part of the whole non-dual universe, including individual humans). Those writings include mantras from three of the great Buddhist Bodhisattvas: Padmasambhava (Guru Rinpoche), Avalokiteśvara (Chenrezig, the bodhisattva of compassion, and the patron of the Tibetan people), and Manjusri.

In addition to mantras, prayers for the long life and good fortune of the person who mounts the flags are often included. Images (or the names) of four powerful animals (also known as the Four Dignities), the dragon, the garuda (a wise eagle-like bird), the tiger, and the Snowlion, adorn each corner of a flag. 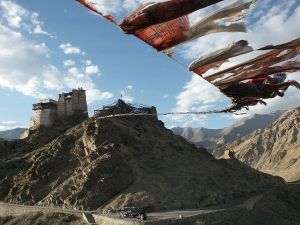 Prayer flags connect the two peaks of the peak of victory over Leh, Ladakh, India. On the other peak the Namgyal Tsemo Gompa can be seen

Traditionally, prayer flags are used to promote peace, compassion, strength, and wisdom. The flags do not carry prayers to 'gods,' a common misconception, rather the Tibetans believe the prayers and mantras will be blown by the wind to spread the good will and compassion into all pervading space. Therefore, prayer flags are thought to bring benefit to all.

By hanging flags in high places the "Wind Horse" will carry the blessings depicted on the flags to all beings. As wind passes over the surface of the flags which are sensitive to the slightest movement of the wind, the air is purified and sanctified by the Mantras.

The prayers of a flag become a permanent part of the universe as the images fade from exposure to the elements. Just as life moves on and is replaced by new life, Tibetans renew their hopes for the world by continually mounting new flags alongside the old. This act symbolizes a welcoming of life changes and an acknowledgment that all beings are part of a greater ongoing cycle.

Timing of Hanging and Taking Down

Some believe that hanging the flags on inauspicious astrological dates may bring misfortune for as long as they are flying. Devotees believe that sunny mornings and windy days are the best time to put up new prayer flags.

Tradition calls for sets of five colored flags set up in the following order: blue, white, red, green, yellow from left to right. Those colors represent the Five Buddha Families and the five elements.

Lungta-style prayer flags hang along a mountain path in Nepal

The origin of Prayer flags traces to the ancient "Bön" tradition of Tibet where shamanistic Bonpo used primary-colored plain flags in healing ceremonies. According to Traditional Tibetan medicine, the balance of the five elements fosters health and harmony.[1]

Buddhist replace old prayer flags with new ones annually on the Tibetan New Year. The symbols and mantras on prayer flags being sacred, tradition calls for treating them with respect. They should not be placed on the ground or used in clothing. Old prayer flags should be burned. During the Cultural Revolution, the communists discouraged prayer flags but still tolerated them. Many traditional designs may have been lost. Currently, different styles of prayer flags can be seen all across the Tibetan region. Most of the traditional prayer flags today have been made in Nepal and India by Tibetan refugees or by Nepali Buddhists. The flags are also manufactured in Bhutan for local use.