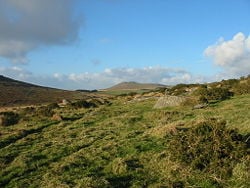 The Brown Will Bodmin Moor in Cornwall, England.

Pixies (singular Pixie or Pixy) are mythical creatures of English folklore. First described by Anna Eliza Bray in the early nineteenth century, pixies are considered to be particularly concentrated in the areas the downs and moors of Devon and Cornwall. Like sprites and other different types of English faeries, pixies are often considered mischievous, but not overtly malevolent creatures of nature. Their most commonly depicted image is a wingless and pointy-eared fairy-esque creature dressed in green. Pixies continue to appear in stories and movies, often described as mischievous beings. Reported sightings have become less common, however, as the majority of people no longer believe in such creatures.

While many of these depictions are considered purely fictional, creatures such as pixies, somewhat like human beings but with abilities that transcend the physical realm, find correlation in the angels of many religions. When a belief in the realm of spirits is accepted, as was the case with Celtic and pre-Celtic inhabitants of the areas where pixies were to be found, the existence of beings that have such "supernatural" abilities becomes possible. Thus, it may be that the origin of such creatures lies in fleeting experiences of creatures from the spiritual realm who take on the appearance of pixies for the purpose of relating to humans.

The exact origin of the word pixie (also spelled pixy) is obscure, but most likely stems from the Old English pisgy, which was the local name given to fairy-like creatures, although not specifically pixies.[1] This idea is supported by the fact that in regional dialect, these mischievous little folk are sometimes referred to as "piskies"/"piskeys" or "the little people." Due to the pranks they were renowned for playing on humans, the terms "pixie-led" and "pixilated" developed, meaning a person who cannot see clearly due to confusion.

Pixies are usually depicted as being wingless, having pointed ears, and often wearing a green outfit and pointed hat. Sometimes their eyes are described as being pointed upwards at the temple ends. They are said to enjoy playing tricks on people; for example, stealing their belongings or throwing things at them. At night, they steal horses and bring them back before dawn, leaving only tangled manes as evidence of the prank. Some pixies are said to exude pixie dust, which is left in their footprints or floating behind them as they move.

Pixies can be repelled by objects made from iron or iron ore, as contact with the metal is said to harm them. This is another trait they share in common with other fairies of the British Isles.

The first to write extensively about pixies was Anna Eliza Bray in the early nineteenth century.[2] Before then, pixies were part of the long-standing oral tradition found in Great Britain that also included the similar faeries. Thus, it is difficult to determine how exactly the idea of the pixie was first conceptualized and when.

One myth states that pixies were a race of people who were not good enough for Heaven or bad enough for Hell and were therefore forced to remain on earth forever. Another legend claims that they were Druids who resisted Christianity and were subsequently sentenced by God to grow smaller and smaller until they accepted Christianity.[3]

Belief in pixies has been attributed to Celtic or pre-Celtic belief in spirits, in this case, little spirits both good and bad that can help or hinder human beings.[4] Many have taken them to be creatures of the spiritual realm, never having had physical form yet able to appear, at least to some on occasion, and to interact with physical creatures and objects in this world. Reflecting their supernatural state, pixies are said to appear most often at night.

It has been speculated by some medical professionals that the legends of pixies and elves were inspired by a genetic disorder known as Williams syndrome. Some of these afflicted have pointed ears, sloe eyes, and elongated faces that make them look like "real" pixies; the syndrome is often called "Pixieism."[5]

Most of the folklore tradition pertaining to pixies centers on their trickery of humans. Most of the time this trickery was harmless, such as rapping on windows and walls at night, blowing out candles, and even throwing small stones at walls. However, sometimes their mischief appeared serious; they were known to lure travelers walking alone astray, confusing them to the point that they could become lost for hours. Those who deliberately followed pixies often vanished without a trace. For example, a farmhand at Rowbrook, situated on the steep, wooded flanks of the River Dart valley, is said to have been lured down towards the river by mysterious voices, calling “Jan Coo.” He was never seen again.[6]

Even within living memory, some rural families left small gifts, such as bowls of food or saucers of milk, for the pixies in order to placate them.[7] When shown this respect and attention, pixies would sometimes help the family by tidying up the house during the night.

In some regions, belief in pixies has endured into contemporary times. During the construction of Hinkley Point nuclear power station, anything that went wrong was blamed on "the Pixy," since the station being built near Wick's Barrow, an Iron Age burial mound called "Pixies Mound" by the locals.[8]