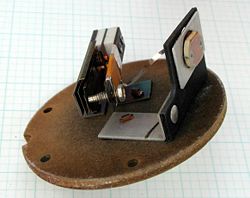 The internal components of a photoelectric control for a typical American streetlight. The photoresistor, facing rightward, controls the flow of current through the heater, which opens the main power contacts. At night, the heater cools, closing the power contacts and energizing the street light.

A photoresistor is an electronic component whose electrical resistance changes as the intensity of light shining on it varies. Usually, when it is exposed to a higher intensity of light, its resistance decreases. It is also referred to as a photoconductor, light-dependent resistor (LDR), photocell, or electric eye.

Many types of photoresistors have been developed, serving a variety of uses. For instance, cadmium sulfide cells are used in street lights, camera light meters, clock radios, security alarms, and outdoor clocks. Ge:Cu photoconductors are excellent detectors of far-infrared radiation and are valuable for infrared astronomy and spectroscopy.

A photoresistor is made of a high-resistance semiconductor. When light of sufficiently high frequency falls on the device, the semiconductor absorbs photons that transfer energy to bound electrons, causing them to jump into the conduction band. The resulting free electrons (and their hole partners) conduct electricity, thereby lowering resistance.

A photoelectric device can be either intrinsic or extrinsic.

Cadmium sulfide (or cadmium sulphide, CdS) cells rely on the material's ability to vary its electrical resistance according to the amount of light striking the cell. The more light that strikes the cell, the lower its resistance. Although not accurate, even a simple CdS cell can have a wide resistance range, from less than 100 ohms (Ω) in bright light to in excess of ten MΩ in darkness. Many commercially available CdS cells have a peak sensitivity in the region of 500-600 nanometers (nm). The cells are also capable of reacting to a broad range of frequencies, including infrared (IR), visible light, and ultraviolet (UV). They are often found on street lights as automatic on/off switches. They were once used in heat-seeking missiles to sense for targets.

There are many types of photoresistors. Inexpensive cadmium sulfide cells can be found in many consumer items, such as camera light meters, clock radios, security alarms, street lights and outdoor clocks. They are also used in some dynamic compressors to control gain reduction. At the other end of the scale, Ge:Cu photoconductors are among the best detectors of far-infrared radiation, and they are used for infrared astronomy and infrared spectroscopy.

The symbol for a photoresistor, as used in some circuit diagrams, is shown below.

Retrieved from https://www.newworldencyclopedia.org/p/index.php?title=Photoresistor&oldid=1088993
Categories:
Hidden category:
This page was last edited on 24 November 2022, at 05:04.
Content is available under Creative Commons Attribution/Share-Alike License; additional terms may apply. See Terms of Use for details.