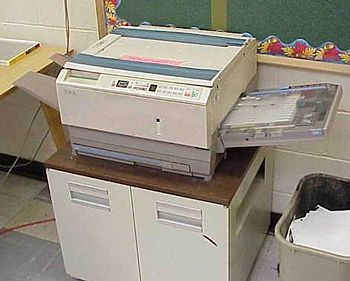 A small, much-used Xerox copier in a high school library.

Photocopying is a process that makes paper copies of documents and other visual images quickly and cheaply. Most current photocopiers use a technology called xerography, a dry process using heat. (Copiers can also use other output technologies such as ink jet, but xerography is standard for office copying.)

Xerographic office photocopying was introduced by Xerox in the 1960s, and over the following 20 years it gradually replaced copies made by Verifax, Photostat, carbon paper, mimeograph machines, and other duplicating machines. The prevalence of its use is one of the factors that prevented the development of the paperless office heralded early in the digital revolution.

Photocopying is widely used in business, education, and government. There have been many predictions that photocopiers will eventually become obsolete as information workers continue to increase their digital document creation and distribution and rely less on distributing actual pieces of paper. However, photocopiers are undeniably more convenient than computers for the very common task of creating a copy of a piece of paper.

In 1937, Bulgarian physicist Georgi Nadjakov found that when placed in an electric field and exposed to light, some dielectric materials acquire permanent electrical polarization in the exposed areas.[1] That polarization persists in the dark and is destroyed in light.

Chester Carlson, the inventor of photocopying, was originally a patent attorney and part-time researcher and inventor. His job at the patent office in New York required him to make a large number of copies of important papers. Carlson, who was arthritic, found this a painful and tedious process. This prompted him to conduct experiments with photoconductivity. Carlson experimented with "electrophotography" in his kitchen and in 1938, applied for a patent for the process. He made the first "photocopy" using a zinc plate covered with sulfur. The words "10-22-38 Astoria" were written on a microscope slide, which was placed on top of more sulfur and under a bright light. After the slide was removed, a mirror image of the words remained. Carlson tried to sell his invention to some companies, but because the process was still underdeveloped he failed. At the time multiple copies were made using carbon paper or duplicating machines and people did not feel the need for an electronic machine. Between 1939 and 1944, Carlson was turned down by over 20 companies, including IBM and GE, neither of which believed there was a significant market for copiers.

In 1944, the Battelle Memorial Institute, a non-profit organization in Columbus, Ohio, contracted with Carlson to refine his new process. Over the next five years, the institute conducted experiments to improve the process of electrophotography. In 1947, Haloid (a small New York-based organization manufacturing and selling photographic paper at that time) approached Battelle to obtain a license to develop and market a copying machine based on this technology.

Haloid felt that the word "electrophotography" was too complicated and did not have good recall value. After consulting a professor of classical language at Ohio State University, Haloid and Carlson changed the name of the process to "Xerography," derived from Greek words that meant "dry writing." Haloid decided to call the new copier machines "Xerox," a name that was trademarked in 1948.

In the early 1950s, RCA (Radio Corporation of America) introduced a variation on the process called Electrofax where images are formed directly on specially coated paper and rendered with a toner dispersed in a liquid.

How a photocopier works (using xerography) In 1949, the Xerox introduced the first xerographic copier called Model A. Xerox became so successful that photocopying came to be popularly known as "xeroxing," a situation that Xerox has very actively fought in order to prevent "Xerox" from becoming a genericized trademark. "Xerox" has been found in some dictionaries as the synonym of photocopying, leading to letters and ads from the Xerox Corporation asking that the entries be modified, and that people not use the term "Xerox" in this way. However, this is mainly only true for North America—for example, in the United Kingdom the term "photocopying" is far more common than "Xeroxing," probably due to photocopiers from Japanese and European manufacturers being far more commonly available than Xerox machines when photocopying started becoming popular. "Photostat" is an outdated term for a photocopy, which some in the United Kingdom still use. Some languages use hybrid terms, such as widely used in Polish term kserokopia ("xerocopy"), even despite relatively low percentage of the copying machines available being branded Xerox.

Advances in technology developed the process of electrostatic copying technology where a high-contrast, electrostatic image copy is created on a drum and then a fusible plastic powder (called toner) is transferred to regular paper, heated, and then fused into the paper similar to the technology used in laser printers.

Prior to the widespread adoption of xerographic copiers, photo-direct copies produced by machines such as Kodak's Verifax were used. A primary obstacle associated with the pre-xerographic copying technologies was the high cost of supplies: a Verifax print required supplies costing US$0.15 in 1969, when a Xerox print could be made for US$0.03 including paper and labor. At that period, Thermofax photocopying machines in libraries would make letter-sized copies for $0.25 or more, when the minimum wage for a U.S. worker was US$1.65.

Xerographic copier manufacturers took advantage of the high perceived-value situation of the 1960s and early 1970s and marketed paper that was "specially designed" for xerographic output. By the end of the 1970s paper producers had made xerographic "runability" one of the requirements for most of their office paper brands.

Advances allowed for color photocopies and the area of xerox art developed in the 1970s and 1980s.

Some devices sold as photocopiers have replaced the drum-based process with inkjet or transfer film technology.

Among the key advantages of photocopiers over earlier copying technologies (some gradually adopted) are:

In recent years, all new photocopiers have adopted digital technology, replacing the older analog technology. With digital copying, the copier effectively consists of an integrated scanner and laser printer. This design has several advantages, such as automatic image quality enhancement and the ability to "build jobs" or scan page images independently of the process of printing them. Some digital copiers can function as high-speed scanners; such models typically have the ability to send documents via email or make them available on a local area network.

Low-end copiers also use digital technology, but they tend to consist of a standard PC scanner coupled to an inkjet or low-end laser printer, both of which are far slower than their counterparts in high-end copiers. However, low-end scanner inkjets can provide color copying at a far lower cost than a traditional color copier. The cost of electronics is such that combined scanner–printers sometimes have built-in fax machines.

Colored toner became available in the 1950s, although full-color copiers were not commercially available until 3M released the Color-in-Color copier in 1968, which used a dye sublimation process rather than the normal electrostatic technology. The first electrostatic color copier was released by Canon in 1973.

Color photocopying is a concern to governments since it makes counterfeiting currency much simpler. Some countries have introduced anti-counterfeiting technologies into their currency specifically to make it harder to use a color photocopier to counterfeit. These technologies include watermarks, microprinting, holograms, tiny security strips made of plastic, or other material, and ink that appears to change color as the currency is viewed at an angle. Some photocopying machines contain special software that will prevent the copying of currency that contains a special pattern.

Photocopying material that is subject to copyright (such as books or scientific papers) is subject to restrictions in most countries. It is common practice, especially by students, as the cost of purchasing a book for the sake of one article or a few pages may be excessive. The principle of fair use (in the United States) or fair dealing (in other Berne Convention countries) allows this type of copying for research purposes.

In some countries, such as Canada, some universities pay royalties from each photocopy made at university copy machines and copy centers to copyright collectives out of the revenues from the photocopying and these collectives distribute these funds to various scholarly publishers. In the United States, photocopied compilations of articles, handouts, graphics, and other information called readers are often required texts for college classes. Either the instructor or the copy center is responsible for clearing copyright for every article in the reader and attribution information is included in the front of the reader.

Ultraviolet exposure due to the use of photocopiers is a health concern today. In response to this, “the sensitizing light source was filtered green to match the optimal sensitivity of the photoconductive surface. This filtering conveniently removed all ultraviolet” radiation.[2]

Similar to forensic identification of typewriters, computer printers and copiers can be traced by imperfections in their output. The mechanical tolerances of the toner and paper feed mechanisms cause banding, which contain information about the individual device's mechanical properties. It is usually possible to identify the manufacturer and brand, but in some cases the individual printer can be identified from a set of known printers by comparing their outputs.[3]

In 2005, some high-quality color printers and copiers were demonstrated to steganographically embed their identification code in the printed pages as fine and almost invisible patterns of yellow dots. This reportedly had been done by top-of-the-line copiers for several years. The sources identify Xerox and Canon as firms engaging in this practice.[4] The U.S. government has been reported to have asked these companies to implement such a tracking scheme so that counterfeiting can be traced.

Retrieved from https://www.newworldencyclopedia.org/p/index.php?title=Photocopy&oldid=1088990
Categories:
Hidden category:
This page was last edited on 24 November 2022, at 04:26.
Content is available under Creative Commons Attribution/Share-Alike License; additional terms may apply. See Terms of Use for details.