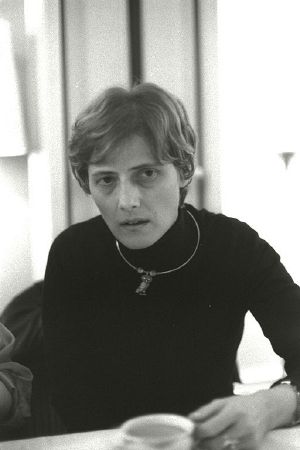 Born in Günzburg, Bavaria, Germany in 1947 with the name Petra Karin Lehmann, she came to America at the age of twelve when her mother married an American Army officer. She lived and studied in the United States until her return to West Germany in 1970. She retained her West German citizenship throughout her life.

Kelly focused her political work and public speaking on the four themes closest to her heart: Ecology, feminism, peace and non violence, and human rights and the links between them. She believed in civil disobedience as a means to drawing attention to problems and abuses within these four areas. She became well-known throughout the world for her highly publicized and daring actions.

Petra Kelly was found shot dead in 1992, along with her partner of ten years, Gert Bastian. She was 44; he was 69. Their deaths were never solved but assumed to be murder/suicide. Kelly's friends believe her death was totally unexpected and occurred without her consent. Petra Kelly was buried in the Wuerzburg Waldfriedhof, Wuerzburg, near the village of Heidingsfeld in lower Frankonia, Bavaria.

The vision I see is not only a movement of direct democracy, of self- and co-determination and non-violence, but a movement in which politics means the power to love and the power to feel united on the spaceship Earth.

Petra Karin Lehmann was born in Gunzberg, Bavaria (then in West Germany) on November 27, 1947. She attended the Englisches Institut, a Roman Catholic boarding school for girls in Gunzberg. In 1960, her mother married a U.S. Army Lieutenant Colonel, John E. Kelly. The family moved to Georgia (U.S.A.), where the teenage Petra became involved in civil rights activities. She attended high school in Hampton, Virginia where she had a weekly radio program on current issues.

As a student she was active in the anti-war, civil rights, antinuclear, and feminist movements. She also volunteered in the presidential campaign for Senator Robert Kennedy in 1968. Following his assassination, she volunteered in the office of Senator Hubert H. Humphrey during his electoral campaign.

In 1971, Ms. Kelly received an M.A. degree in political science from the University of Amsterdam for a thesis on European integration.

Petra Kelly never married, though she spent ten years with her colleague, Gert Bastian, whom she considered her soul mate. In 1992, both were found shot dead in the apartment they shared in Bonn, Germany. Their murders were never investigated as such, but quickly closed by the police as "murder-suicide." Most of her friends and colleagues disagreed with this determination. Petra Kelly was buried in the Wuerzburg Waldfriedhof, Wuerzburg, near the village of Heidingsfeld in lower Frankonia, Bavaria. She was 44 years old at the time of her death.

Petra's half sister, Grace Patricia Kelly, died at the age of ten from eye cancer. This was in 1970. Four years later, Petra, along with her grandmother, founded the Grace P. Kelly Association for the Support of Cancer Research for Children in Nuremburg.

This organization spans European nations as a citizen action group studying the connection between children's cancer and the environment, in particular the nuclear industry. A sister project offering psychosocial children's care, the Children's Planet was founded to care for children with life-threatening illnesses.

The death of her sister and the belief that her cancer was caused by environmental poisons sparked Kelly's life-long interest in environmental causes.

In 1970, Petra returned to Europe and continued her education there. From 1972 until 1983, she worked with the European Community's Economic and Social Committee in Brussels, involved in a wide range of issues, such as environmental and health issues, social problems, labor, women rights, and consumer affairs.

In 1972 Kelly became active in the West German Federal Association of Citizens for Environmental Protection. At this time she also joined the Social Democratic Party of Chancellor Willy Brandt. She resigned from this seven years later in protest of the defense and energy policies of Helmut Schmidt, Brandt's successor.

She was a spokesperson for BBU, the umbrella of the German ecological citizen action groups, in 1978 and 1979.

In 1980, along with Gert Bastian, she initiated the Krefelder Appell against the stationing of Pershing II and cruise missiles. She was also a co-founder of the Bertrand Russell Campaign for a Nuclear-Free Europe.

Petra conceived of a nonviolent, ecological political party in the late 1970s. In 1979, Die Grunen, the Green Party, was founded by Petra along with Lukas Beckmann, Joseph Beuys, Rudi Dutschke, Milan Horacek, Roland Vogt, Gerda Degen, Halo Saibold and others from a number of ecologically concerned groups. She became the spokesperson in 1980, holding that position until 1982. With this position she became the first female head of a political party in Germany.

She served two terms, a total of seven years, in the Bundestag (the parliament of Germany) as a representative of the Greens. In the Bundestag she served as the Greens' spokesperson as well as a member of the Foreign Relations Committee. She also served on the Bundestag's Subcommittee of Disarmament, focusing on human rights, disarmament, neutrality, and foreign policy.

Kelly eventually separated from the Greens, when she viewed them as becoming too politically motivated, losing sight of the original purpose of the organization.

In February 1983, Ms. Kelly joined with her colleague in the Greens, Gert Bastian, to organize a "War Crimes Tribunal" at Nuremberg in which they "indicted" those nations guilty of possessing weapons of mass destruction and nuclear weapons. This included France, China, Great Britain, the U.S., and USSR. Two thousand people attended this rally.

A number of U.S. military bases around Europe were the sites of blockades and protests staged by Kelly and her colleagues. Similar actions occurred in Australia, the United States, and the German Democratic Republic. With Bastian and other Green's MPs she also staged an occupation of the German Embassy in Pretoria to protest Germany's economic ties with South Africa during Apartheid.

In the early 1970s, Petra Kelly sponsored a Tibetan foster daughter, Nima, whom she adopted in 1973.

In 1987, 1988, and 1989, she introduced parliamentary resolutions condemning Chinese human rights violations in Tibet.

The first international hearing on human rights abuses in Tibet was organized by Kelly in 1989. She brought together 40 experts and six hundred participants. This took place in Bonn's Parliamentary House and was followed by similar hearings in other nations.

The vision I see is not only a movement of direct democracy, of self- and co-determination and non-violence, but a movement in which politics means the power to love and the power to feel united on the spaceship Earth. … In a world struggling in violence and dishonesty, the further development of non-violence not only as a philosophy but as a way of life, as a force on the streets, in the market squares, outside the missile bases, inside the chemical plants and inside the war industry becomes one of the most urgent priorities. … The suffering people of this world must come together to take control of their lives, to wrest political power from their present masters pushing them towards destruction. The Earth has been mistreated and only by restoring a balance, only by living with the Earth, only by emphasizing knowledge and expertise towards soft energies and soft technology for people and for life, can we overcome the patriarchal ego (Chatto and Windus).

Kelly was a driving force behind the founding of The Greens, as well as a continual inspiration for the anti-nuclear movement.

Along with her activism, she was a writer. Her book topics include such issues as Tibet and China, Hiroshima, Guernica, children's cancer and environmental issues.

Awards and honors she received are

With the goal of furthering Petra Kelly's ideas and political message, the Petra Kelly Foundation was founded in 1997 as part of the Heinrich Böll Foundation. Since 1998, the foundation has presented the Petra Kelly Prize for Human Rights, Ecology, and Non-Violence.

Perhaps the greatest recognition a person can ask for would be words of commendation from the Dalai Lama. On the tenth anniversary of her death, he said;

Petra Kelly was a committed and dedicated person with compassionate concern for the oppressed, the weak and the persecuted in our time. Her spirit and legacy of human solidarity and concern continue to inspire and encourage us all.

Retrieved from https://www.newworldencyclopedia.org/p/index.php?title=Petra_Kelly&oldid=987357
Categories:
Hidden category:
This page was last edited on 17 April 2015, at 18:43.
Content is available under Creative Commons Attribution/Share-Alike License; additional terms may apply. See Terms of Use for details.