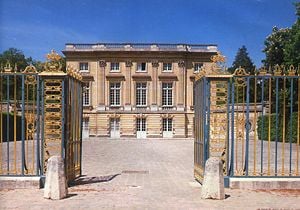 The Petit Trianon is a château and museum located on the grounds of the Palace of Versailles in Versailles, France. It was designed and completed in 1768, by the renowned French architect Ange-Jacques Gabriel during the reign of Louis XV. However, it was during the reign of Louis XVI and Marie Antoinette that it became the unofficial residence for the Queen Consort and her children, who preferred its private and pastoral setting to the largesse and formality of the royal court.

Marie Antoinette often sought refuge at the Petit Trianon, where she attempted to re-create the intimate musical and theatrical productions of her childhood with her retinue of friends and family. All protocol regarding admittance to the property was de par la Rein ("by order of the Queen"); meaning even the King needed express permission to enter.

While historians have pointed to Marie Antoinette's excesses as a cause of the French Revolution, there can be no doubt that a legacy of beauty, art, and design, as exemplified by the Petit Trianon's classical structure, was bequeathed to subsequent generations of Europeans. This enduring testament to French culture, enjoyed by tourists today, includes paintings, time period furnishings, many objets d'art and flowering botanical gardens. 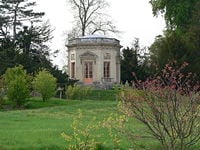 Modeled after the Grand Trianon and built nearly a hundred years later, the Petit Trianon, was to serve a similar purpose: to provide a retreat and hideaway from life within the Royal court and main palace. Originally, intended for Louis XV's mistress, Madame Pompadour, who died before its completion, it was then bequeathed to her successor Madame du Barry. In 1774, the 20 year old Louis XVI, upon his accession to the throne, gave the château and its surrounding park to his 19 year old Queen Marie Antoinette, for her exclusive use and enjoyment.

The chateau, along with its outer buildings, was built near a lake, and was meant to resemble a small rural village. On its pastoral grounds, sheep grazed and wild flowers were grown and picked by Marie Antoinette and her children. There she and her entourage could enjoy favorite past times reminiscent of her own Austrian childhood, such as staging small operas and theatrical productions. Today, a harp, similar to the one Marie Antoinette actually played hangs in one of the rooms. She, along with others in her inner circle such as the Princess de Lamballe enjoyed a respite from court life that came to an unseemly end when the French Revolution sought to extinguish the excesses of absolute monarchism.[1] 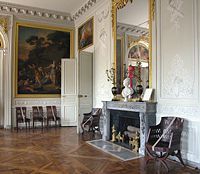 The château of the Petit Trianon is a prime example of the transition from the Rococo, to the more formalized Neoclassical architectural style which became vogue in the late seventeenth and early eighteenth century. The exterior of the château is elegant, almost austere, in its simplicity. The chateau's originality is expressed by its four sides or facades, each thoughtfully designed according to the part of the estate it would face. The Corinthian order of columns is the dominant decorative feature of the chateau, with two detached and two semi-detached pillars on the side of the formal French garden, and pilasters facing both the courtyard and the area once occupied by Louis XV's greenhouses. Overlooking the former botanical garden of the king, the remaining facade was left bare.

The garden Marie Antoinette had planted for the Petit Trianon, her Jardin Anglais, was less formal then the traditional gardens of 17th century France and was meant to emulate an English garden replete with her favorite flowers, tulips and irises. The "terrible gale of December 1999" felled 2000 trees at Versailles, including many of those that Marie Antoinette had planted at Petit Trianon. They are in the process of being replaced.[2]

Reflecting Marie Antoinette's almost obsessive need for privacy, the building was designed to require as little interaction between guests and servants as possible. To that end, the table in the salles à manger was originally designed to be mobile, that is mechanically lowered and raised through the floorboards so that the servants below could set places sight unseen. The tables were never built, but the delineation for the mechanical apparatus can still be seen from the foundation.

Within the queen's apartment one sees a reflection of Marie Antoinette's feminine tastes, distinct from the King's, and reflecting her own trendsetting style for the times. The decor of her boudoir displays a unique inventiveness, featuring mirrored panels that, by the simple turning of a crank, can be raised or lowered to obscure the windows. The latest furnishings with their rich woodwork were designed by Georges Jacob and Jean Henri Riesener who employed numerous carvers and gilders to create the beautiful woodwork of the bed and seats. The wallpaper was painted by Jean-Baptiste Pillement, known particularly for his delicate landscapes.

Perhaps influenced by the natural philosophy of Jean-Jacques Rousseau, as were many French during that era, Marie Antoinette was seeking a more natural style; one that would appeal to the common people. This simplistic style was especially reflected in the dress that she wore at the hameau or small farmette on the grounds of the Petit Trianon. One can see this costume represented in a portrait done by one of her favorite court painters, Élisabeth-Louise Vigée-Le Brun. In "Marie-Antoinette en gaulle (Marie-Antoinette in a Muslin Dress)" (1783), the queen is depicted as a simple country girl styled in a light summer muslin frock and bonnet carrying a basket of cut flowers. It was an image she hoped to cull with her French subjects but one that in actuality created an uproar when she was criticized for wearing a dress not fitting for a queen, especially with its un-corseted waist. Despite Marie Antoinette's best efforts it would seem that she could please no one as her monarchic era drew to a close.[3]

The ghosts of Petit Trianon

The Moberly-Jourdain incident was an alleged paranormal occurrence witnessed by two women on August 10, 1901, in the gardens of the Petit Trianon. In 1911, two English academics, Charlotte Anne Moberly and Eleanor Jourdain, described an experience at Petit Trianon they described as a time slip. They pseudonymously published a book entitled An Adventure, which created a sensation with the public, was dismissed by the critics, and brought ridicule to the pair. It is now published under the title, The Ghosts of Trianon.[4]

After a visit to Versaille, Moberly, and Jourdain wandered onto the grounds of the Petit Trianon where they claimed to have seen Marie Antoinette and a retinue of 17th century people who they first identified as grounds keepers. Upon reflecting on the fact that the grounds were closed and had no scheduled events that day they attributed their experience to a "ghost sighting" and claimed that one of the persons they saw may have even been Marie Antoinette. Detractors accused them of having a psychotic break with reality or a Folie à deux.

Retrieved from https://www.newworldencyclopedia.org/p/index.php?title=Petit_Trianon&oldid=1088916
Categories:
Hidden category:
This page was last edited on 24 November 2022, at 01:37.
Content is available under Creative Commons Attribution/Share-Alike License; additional terms may apply. See Terms of Use for details.