Paul Klee (December 18, 1879 - June 29, 1940) was a Swiss painter of German nationality. He was influenced by many different art styles in his work, including expressionism, cubism, and surrealism. He and his friend, the Russian painter Wassily Kandinsky, were famous for teaching at the Bauhaus school of art and architecture, but are probably best known for their association with Der Blaue Reiter (The Blue Rider). Der Blaue Reiter attempted to infuse their art with spiritual concerns.

Klee was born in Münchenbuchsee (near Bern), Switzerland, into a musical family; his father, Hans Klee, was a German music teacher at the Hofwil Teacher Seminar near Bern. Klee started young at both art and music. At age seven, he started playing the violin, and at age eight, he was given a box of chalk from his grandmother and was encouraged to draw frequently with it. Paul could have done either as an adult; in his early years, he had wanted to be a musician, but he later decided on the visual arts. He studied art at the Academy of Fine Arts in Munich, with Heinrich Knirr and Franz von Stuck. After traveling to Italy and then back to Bern, he settled in Munich, where he met Wassily Kandinsky, Franz Marc, and other avant-garde figures and became associated with Der Blaue Reiter. Here he met Bavarian pianist Lily Stumpf, whom he married; they had one son, named Felix Paul.

Der Blaue Reiter was a German movement lasting from 1911 to 1914, fundamental to Expressionism, along with Die Brücke, which was founded the previous decade in 1905. Wassily Kandinsky, Franz Marc, August Macke, Alexej von Jawlensky, Marianne von Werefkin, Lyonel Feininger, Albert Bloch, and others founded the group in response to the rejection of Kandinsky's painting, Last Judgment, from an exhibition. Der Blaue Reiter lacked a central artistic manifesto, but was centered around Kandinsky and Marc. Klee was one of the affiliated artists.

The name of the movement comes from a painting by Kandinsky created in 1903. It is also claimed that the name could have derived from Marc's enthusiasm for horses and Kandinsky's love of the color blue. For Kandinsky, blue is the color of spirituality: The darker the blue, the more it awakens human desire for the eternal (see his 1911 book On the Spiritual in Art).

Within the group, artistic approaches and aims varied from artist to artist; however, the artists shared a common desire to express spiritual truths through their art. They believed in the promotion of modern art; the connection between visual art and music; the spiritual and symbolic associations of colour; and a spontaneous, intuitive approach to painting. Members were interested in European medieval art and primitivism, as well as the contemporary, non-figurative art scene in France. As a result of their encounters with cubist, fauvist and Rayonist ideas, they moved towards abstraction.

Der Blaue Reiter organized exhibitions in 1911 and 1912, which toured Germany. They also published an almanac featuring contemporary, primitive, and folk art, along with children's paintings. In 1913, they exhibited in the first German Herbstsalon.

The group was disrupted by the outbreak of the First World War in 1914. Franz Marc and August Macke were killed in combat. Wassily Kandinsky, Marianne von Werefkin, and Alexej von Jawlensky were forced to move back to Russia because of their Russian citizenship. There were also differences of opinion within the group. As a result, Der Blaue Reiter was short-lived, lasting for only three years, from 1911 to 1914.

In 1914, Klee visited Tunisia, with August Macke and Louis Moilliet, and was impressed by the quality of the light there, writing, "Color has taken possession of me; no longer do I have to chase after it, I know that it has hold of me forever… Color and I are one. I am a painter." Klee also visited Italy (1901), and Egypt (1928), both of which greatly influenced his art. Klee was one of Die Blaue Vier (The Blue Four), with Kandinsky, Feininger, and Von Jawlensky; formed in 1923, they lectured and exhibited together in the U.S. in 1924.

He died in Muralto, Switzerland, in 1940, without having obtained Swiss citizenship. The Swiss authorities eventually accepted his request, six days after his death.

Pamela Kort observed, "Klee's 1933 drawings present their beholder with an unparalleled opportunity to glimpse a central aspect of his aesthetics that has remained the possibilities of parody and wit. Herein lies their real significance, particularly for an audience unaware that Klee's art has political dimensions."[1]

Throughout his career, Paul Klee used color in a variety of unique and diverse means, in a relationship that progressed and evolved in a variety of ways. For an artist that loved so much of the natural world, it seems rather odd that Klee originally despised color, believing that it was in itself, little more than a decoration to a work.

Eventually, Klee would learn to manipulate color with great skill, coming to teach lessons on color mixing and color theory to students at the Bauhaus. This progression in itself is of great interest, because his views on color would ultimately allow him to write about it from a unique viewpoint among his contemporaries.

Klee influenced the work of other noted artists of the early twentieth century, including Belgian printmaker Rene Carcan.

Klee worked with many different types of media—oil paint, watercolor, ink, and more. He often combined them into one work. He has been variously associated with expressionism, cubism, and surrealism, but his pictures are difficult to classify. They often have a fragile, child-like quality to them and are usually on a small scale. They frequently allude to poetry, music, and dreams and sometimes include words or musical notation. The later works are distinguished by spidery hieroglyph-like symbols which he famously described as "taking a line for a walk." His better-known works include Southern (Tunisian) Gardens (1919), Ad Parnassum (1932), and Embrace (1939).

Following World War I, in which he painted camouflage on airplanes for the imperial German army, Klee taught at the Bauhaus, and from 1931 at the Düsseldorf Academy, before being denounced by the Nazi Party for producing "degenerate art," in 1933. The degenerate art exhibit catalogs had even called Klee's work "the work of a sick mind."

Another of Klee's paintings, Angelus Novus, was the object of an interpretive text by German philosopher and literary critic Walter Benjamin: In it, Benjamin suggests that the angel depicted in the painting might be seen as representing progress in history. In 1933, Paul Klee returned to Switzerland; in 1935, he began experiencing the symptoms of what was diagnosed as scleroderma after his death. The progression of his fatal case of the disease can be followed through the art he created in his last years.

When Paul Klee died at age sixty, he left at least 8926 works of art. The words on his tombstone say, "I belong not only to this life. I live as well with the dead, as with those not born. Nearer to the heart of creation than others, but still too far." Today, a painting by Paul Klee can sell for as much as $7.5 million. 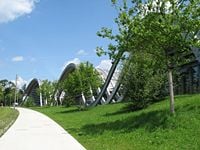 A museum dedicated to Paul Klee was built in Bern, Switzerland, by the Italian architect Renzo Piano. It opened in June 2005, and houses a collection of about 4000 works by Paul Klee. Another substantial collection of Klee's works is owned by chemist and playwright Carl Djerassi and is displayed at the San Francisco Museum of Modern Art.

Paul Klee's father was a German citizen; his mother was Swiss. Swiss law determined citizenship along paternal lines, and thus Paul inherited his father's German citizenship. He even served in the German army during World War I. However, Klee grew up in Berne, Switzerland, and returned there often, even before his final emigration from Germany in 1933. He died before his application for Swiss citizenship was processed.[2]

Retrieved from https://www.newworldencyclopedia.org/p/index.php?title=Paul_Klee&oldid=1088367
Categories:
Hidden category:
This page was last edited on 21 November 2022, at 17:07.
Content is available under Creative Commons Attribution/Share-Alike License; additional terms may apply. See Terms of Use for details.