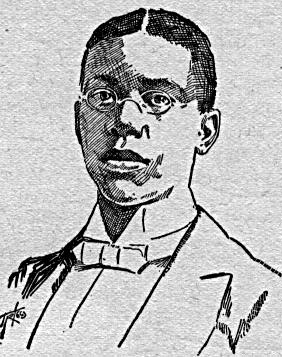 Paul Laurence Dunbar (June 27, 1872 – February 9, 1906) was a seminal American poet in the late nineteenth and early twentieth century. As the first African-American to gain major praise for his poetry, Dunbar represents the beginning of one of America's greatest literary traditions. Dunbar's work would endure, inspire, and direct the authors of the Harlem Renaissance who would succeed him in the twentieth century, most notably Langston Hughes. Dunbar exemplified what Hughes would later outline in his essay "The Negro Artist and the Racial Mountain." Dunbar's great struggle for recognition as an African-American poet was a struggle to be recognized not as a "black poet" but as "a poet who is black". Dunbar was not only America's first black poet; he was also the first to protest for equal recognition. Throughout his life, Dunbar struggled to be recognized as a poet belonging to the same tradition as John Keats and William Shakespeare.

Dunbar largely failed to convince white critics and patrons of his day to treat him with the same respect and admiration as his white contemporaries. However, his contributions to American poetry extended beyond his political commitment. Echoing Frederick Douglass, Dunbar would attempt throughout his life to "agitate, agitate, agitate". He was deeply concerned with the art of his craft as well, and became the first poet to use African-American dialects in poetry as a means to more than just comedic ends. Dunbar largely split his career between writing standard English poetry and "dialect poems." Although he personally detested being forced to write in dialect in order to get published, his work would inspire generations of black writers to use dialect and Afro-American idioms as materials for the creation of great works of art.

Dunbar's influence in this regard extends beyond the Harlem Renaissance into the present day. Contemporary poets, both black and white, ranging from writers as diverse as Langston Hughes and Maya Angelou to John Berryman have acknowledged their debt to Dunbar.

Dunbar's work is known for its colorful language and use of dialect, and a conversational tone, with a brilliant rhetorical structure. Some critics argue the he deserves to be enshrined alongside Walt Whitman and Emily Dickinson in the pantheon of nineteenth century American poets.

Dunbar was born in Dayton, Ohio to escaped slaves. His father was a veteran of the American Civil War, having served in the 55th Massachusetts Infantry Regiment and the 5th Massachusetts Colored Cavalry Regiment. His mother worked at odd jobs to make ends meet. His parents instilled in him a love of learning and history, and his mother in particular encouraged him to study poetry. As a slave, she had had opportunities to eavesdrop on her masters while they read works of literature aloud, and the experience had kindled in her a life-long love of poetry. Dunbar's parents separated, and his mother worked to support him through school. Dunbar was the only black student at Dayton Central High School, but he participated actively as a student. During college, he was both the editor of the school newspaper, class president, as well as the president of the school literary society.

He wrote his first poem at age six and gave his first public recital at age nine. Dunbar's first published work came in a newspaper published by his high school friends who owned a printing plant, Wilbur and Orville Wright. The Wright Brothers later invested in the Dayton Tattler, a newspaper aimed at the black community and employed Dunbar as both editor and publisher.

His first collection of poetry, Oak and Ivy, published in 1892, attracted the attention of James Whitcomb Riley, the popular "Hoosier Poet." Both Riley and Dunbar wrote poems in both standard English and dialect. His second book, Majors and Minors (1895) brought him national fame and the patronage of William Dean Howells, the novelist, critic and editor of Harper's Weekly. As a result of Howells' praise, his first two books were combined as Lyrics of a Lowly Life, launching Dunbar on a career of international literary fame that was cut short by his early death.

He moved to the Le Droit Park neighborhood of Washington, D.C. While in Washington, he attended Howard University.

His wife Alice Moore Dunbar was a famous poet as well. A graduate of Dillard University in New Orleans, with a master's degree from Cornell University, Moore's most famous works include a short story entitled, "Violets". She and her husband also wrote books of poetry as companion pieces. An account of their love, life and marriage was depicted in a play by Katherine McGhee titled Oak and Ivy.

He kept a lifelong friendship with the Wright brothers, and was also closely associated with Frederick Douglass and Booker T. Washington. In 1893 he was invited to recite at the World's Fair. Frederick Douglass was in the audience, and afterwards remarked that he thought Dunbar to be "the most promising young colored man in America." Dunbar was also honored with a ceremonial sword by President Theodore Roosevelt.

He wrote a dozen books of poetry, four books of short stories, five novels and a play. His essays and poems were published widely in the leading journals of the day. His work appeared in Harper's Weekly, the Sunday Evening Post, the Denver Post, Current Literature and a number of other publications. During his life, considerable emphasis was laid on the fact that Dunbar was of pure black descent, with no white ancestors.

Dunbar traveled to England in 1897 to recite his works on the London literary circuit. After his return, Dunbar took a job at the Library of Congress in Washington, D.C. In 1900, Dunbar was diagnosed with tuberculosis, and moved to Colorado with his wife on the advice of his doctors. Dunbar's health continued to worsen, however, and to combat the pain he began to drink heavily, a problem that would ultimately result in the dissolution of his marriage. Depressed over the loss of his wife and his worsening health, Dunbar became a full-fledged alcoholic and his health became ever grimmer. Dunbar died at age 33 on February 9, 1906, and was interred in the Woodland Cemetery, Dayton, Ohio.

In 1975 the U.S. Postal Service issued a 10-cent commemorative stamp in honor of Paul Laurence Dunbar.

Dunbar in Standard English, and Dunbar in dialect

Some of Dunbar's work was written in conventional English, but others appeared in dialect, and he never escaped the suspicion that there was something demeaning about producing a dialect poem despite its evident popularity.

He is quoted as saying "I am tired, so tired of dialect. I send out graceful little poems, suited for any of the magzines, but they are returned to me by editors who say, Dunbar, but we do not care for the language compositions".

For benefit of the modern reader who has not seen a dialect poem, here are two short similar stanzas—one in standard English, another in dialect. It should be evident that Dunbar was a fine poet of standard English.

What dreams we have and how they fly
Like rosy clouds across the sky;

Of wealth, of fame, of sure success,
Of love that comes to cheer and bless;

And how they whither, how they fade,
The waning wealth, the jilting jade —

The fame that for a moment gleams,
Then flies forever, — dreams, ah — dreams!

Look hyeah! What you axing'?

What meks me so merry?

'Spect to see me sighin'