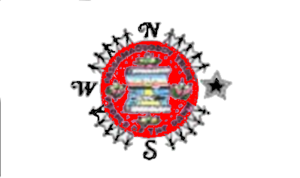 The Passamaquoddy (Peskotomuhkati or Pestomuhkati in the Passamaquoddy language) are a Native American/First Nations people who live in northeastern North America, primarily in Maine and New Brunswick. Although closely related peoples sharing a common language, the Maliseet kinsfolk and the Passamaquoddy have always considered themselves politically independent. The French referred to both of these tribes as the "Etchmins." Passamaquoddy Bay, which straddles the United States-Canada border between New Brunswick and Maine, derives its name from the Passamaquoddy people.

Contemporary Passamaquoddy are known for their arts and crafts, such as jewelry, basketry, wood carving, and building birch bark canoes. Efforts are being made to increase the number of children who speak the native language. To modern Western society, the simple Passamaquoddy subsistence lifestyle may appear impoverished, yet, those who grew up in the traditional ways take pride in preserving the beauty and wisdom of such a lifestyle, and making it known to others. In these ways, the Passamoquoddy continue to practice their traditions while finding their place in the contemporary world. 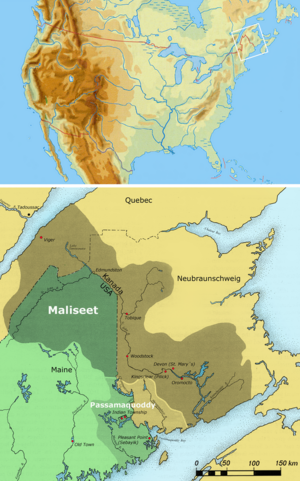 The Passamaqoddy lacked a written history before the arrival of Europeans but do have an extensive oral tradition which includes their mythology.

They were a peaceful people, mostly farmers and hunters, maintaining a nomadic existence in the well-watered woods and mountains of the coastal regions along the Bay of Fundy and Gulf of Maine, and also along the Saint Croix River and its tributaries. They spent most time at the mouths of rivers, where they farmed corn, beans, and squash, and harvested seafood, including porpoise, and traveled inland for game.

European settlers arrived in their lands in the sixteenth century, giving them the name "Passamaquoddy." The word "Passamaquoddy" is an Anglicization of the Passamaquoddy word peskotomuhkati, the prenoun form (prenouns being a linguistic feature of Algonquian languages) of Peskotomuhkat (pestəmohkat), the name they applied to themselves. Peskotomuhkat literally means "pollock-spearer" or "those of the place where polluck are plentiful,"[1] reflecting the importance of this fish.[2]

The Europeans brought with them smallpox and other diseases, which ultimately took a very heavy toll on the natives, reducing their numbers from over 20,000 to around 4,000 practically overnight. In 1586, an epidemic of typhus broke out, also devastating the population.

This caused the Passamaquoddy to band together with their neighboring Abenakis, Penobscots, Micmacs (95 percent of who were wiped out by typhoid fever), and Maliseet tribes, forming the short-lived Wabanaki Confederacy. Wabanaki means "people of the dawn" or "dawnland people," referring to these peoples as the easterners. The name "Wabanaki" itself, however, may be a corruption of the Passamquoddy term Wub-bub-nee-hig, from Wub-bub-phun meaning the "first light of dawn before the early sunrise."[3] The confederacy was a semi-loose alliance formed to help keep the European aggressors and Iroquois at bay. It was officially disbanded in 1862, although five Wabanaki nations still exist and remain friends and allies to this day.

The Passamaquoddy Indians were restrained and limited in the United States to the current Passamaquoddy Pleasant Point Reservation and Passamaquoddy Indian Township Reservation, both in Washington County, Maine. There are also Passamaquoddy off-reservation trust lands in five Maine counties; these lands total almost four times the size of the reservation proper. They are located in northern and western Somerset County, northern Franklin County, northeastern Hancock County, western Washington County, and several locations in eastern and western Penobscot County. Their total land area is 373.888 km² (144.359 sq mi). There was no resident population on these trust lands as of the 2000 census. The Passamaquoddy also live in Charlotte County, New Brunswick, and maintain active land claims but have no legal status in Canada as a First Nation. Some Passamaquoddy continue to seek the return of territory now comprised in Saint Andrews, New Brunswick which they claim as Qonasqamkuk, a Passamaquoddy ancestral capital and burial ground.

Did you know?
Passamaquoddy are known for their arts and crafts, such as jewelry, basketry, wood carving, and building birch bark canoes 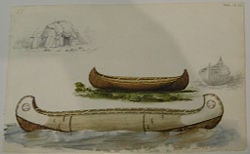 The Passamaquoddy traditionally were nomadic farmers and hunters. Their method of fishing was spear-fishing rather than angling.

They were world-class craftsmen when it came to birch-bark canoes, which provided a lucrative trade industry with other Algonquin tribes. They also practiced highly decorative forms of basket-weaving, and carpentry, as well as enjoying many colorful forms of jewelry. Their crafts can be found on the Pleasant Point Reservation and in surrounding areas today.

In Passamaquoddy mythology, the main spirit is known as Kci Niwesq (also spelled Kihci Niweskw, Kichi Niwaskw, and several other ways.) This means "Great Spirit" in the Passamaquoddy language, and is the Passamaquoddy name for the Creator (God) who is sometimes also referred to as Keluwosit. Kci Niwesq is a divine spirit with no human form or attributes (including gender) and is never personified in Passamaquoddy folklore.

The "Little People" of the Maliseet and Passamaquoddy tribes were considered to be dangerous if disrespected, but are generally benevolent nature spirits. They are known by a variety of names such as the Mikumwesuk, Wunagmeswook, and Geow-lud-mo-sis-eg.

One of the infamous animal spirits of the Passamaquoddy was called Loks (also spelled Luks or Lox), also known as Wolverine, a malevolent Passamaquoddy deity. He usually demonstrates inappropriate behavior like gluttony, rudeness, and bullying, but in some stories he also plays the role of a dangerous monster.

Glooskap (also spelled Glooscap, Koluskap, Gluskabe, Gluskabi, and several other ways) is the benevolent culture hero of the Wabanaki tribes (sometimes referred to as a "transformer" by folklorists.) His name is spelled so many different ways because the Passamaquoddy and the other Wabanaki languages were originally unwritten, so English speakers just spelled it however it sounded to them at the time. The correct Passamaquoddy pronounciation is similar to klue-skopp, but with very soft k and p sounds. Glooskap shares some similarities with other Algonquian heroes such as the Anishinabe Manabozho, Blackfoot Napi, and Cree Wesakechak, and many of the same stories are told in different Algonquian tribes with only the identity of the protagonist differing.

Chenoo and Kewahqu were giant cannibal monsters, similar to the Wendigo of the Cree and other northern tribes. The name "Chenoo" comes from the neighboring Micmac tribe and is pronounced cheh-noo.

The Indian Township and Pleasant Point Passamaquoddy tribal councils form the Passamaquoddy Joint Tribal Council which is responsible for issues that affect both groups, such as jointly owned businesses, tribal land issues, and trust responsibility concerns.

The Passamaquoddy, along with the neighboring Penobscot Nation, are given special political status in the U.S. state of Maine. Both groups are allowed to send a non-voting representative to the Maine House of Representatives. Although these representatives cannot vote, they may sponsor any legislation regarding Native American affairs, and may co-sponsor any other legislation. They are also entitled to serve on House committees.

The total Passamaquoddy population in Maine is about 2,500 people, with more than half of adults still speaking the Maliseet-Passamaquoddy language, shared (other than minor differences in dialect) with the neighboring and related Maliseet people, and which belongs to the Algonquian branch of the Algic language family.

There is also a small Passamaquoddy population in New Brunswick, Canada. They are not, however, recognized by the Canadian government as constituting a First Nation.

To modern Western society, the simple Passamaquoddy subsistence lifestyle of hunting, fishing, basketweaving and other crafts, storytelling and music may appear impoverished. Yet, to those who grew up in the traditional ways like Allen Sockabasin, preserving the beauty and wisdom of such a lifestyle has become their life's work.[4]

The Passamaquoddy may be best known outside the region for Passamaquoddy v. Morton, a 1975 land claims lawsuit in the United States which opened the door to successful land claims negotiations for many eastern tribes, giving federal recognition and millions of dollars to purchase trust lands. The Passamaquoddy tribe was awarded $40 million at the resolution of this case by the Maine Land Claims Act of 1980, signed on March 15, 1980, with a similar sum paid to the Penobscot tribe, in return for relinquishing their rights to 19,500 square miles, for roughly 60 percent of the State of Maine.

They invested the money well enough that they quickly increased it to $100 million. Their investing strategy was written up as a case study by Harvard Business School. [5]

Melvin Joseph Francis (August 6, 1945–January 12, 2006) was the governor of the Passamaquoddy Pleasant Point Reservation, one of two reservations in Maine of the Passamaquoddy Indian tribe, from 1980 until 1990 and again since 2002.[6] Born and raised in Pleasant Point, he attend local schools. After graduating from Shead High School he earned a journeyman's certificate and specialized in carpentry.[7] He spoke the Passamaquoddy language and was engaged in the preservation of his communities traditions. But alike in the betterment of living conditions for his people as a devoted advocate, peacemaker and lending his professional skills were needed. As governor he strongly supported a proposed LNG terminal on tribal land and legislation allowing an Indian-run racetrack casino in Washington County. Both proposals were not without controversy.[6] Francis died when his car crashed head first into a tanker truck. He had been on his way home from the signing of an agreement with the Venezuelan-owned Citgo Petroleum Corporation at Indian Island providing affordable oil to the Passamaquoddy, Penobscot, Mi'kmaq and Maliseet tribes in Maine.[8] The Chief Melvin Francis Memorial Fund was set up in his remembrance to improve the education, health, welfare, safety and lives of tribal members.[9]

Passamaquoddy Tribe elder David Francis of Pleasant Point was awarded an honorary doctorate by the University of Maine at its graduation service in May 2009. Francis worked for decades to develop a written form of the Passamaquoddy language, and was a lead collaborator in the creation of a Passamaquoddy-Maliseet dictionary.[10]

Other notable Passamaquoddy people include:

Retrieved from https://www.newworldencyclopedia.org/p/index.php?title=Passamaquoddy&oldid=1088126
Categories:
Hidden category:
This page was last edited on 18 November 2022, at 09:00.
Content is available under Creative Commons Attribution/Share-Alike License; additional terms may apply. See Terms of Use for details.