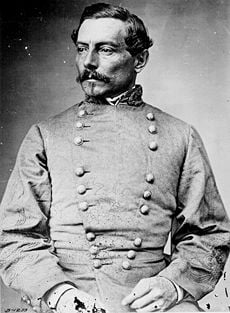 Pierre Gustave Toutant de Beauregard (pronounced IPA: /'boʊ.ɹɪ.ˌgɑɹd/) (May 28, 1818 – February 20, 1893), was a Louisiana-born general for the Confederate Army during the American Civil War. He was also an author, civil servant, politician, and inventor.

Beauregard was the first prominent Confederate general. He commanded the defenses of Charleston, South Carolina, during the Battle of Fort Sumter on April 12, 1861, and three months later was the victor at the First Battle of Bull Run near Manassas, Virginia. He also commanded armies in the Western Theater, including the Battle of Shiloh in Tennessee, and the Siege of Corinth in northern Mississippi. His arguably greatest achievement was saving the city of Petersburg, Virginia, and thus also the Confederate capital of Richmond, from assaults by overwhelmingly superior Union Army forces in June 1864. However, his influence over Confederate strategy was marred by his poor professional relationships with President Jefferson Davis and other senior generals and officials.

After the war he spoke in favor of civil and voting rights for the freed men, making him unpopular among his fellow Confederates. Yet, he proved effective helping develop a "New South" of business and industry. Beauregard was not at heart a supporter of slavery, nor did he really want to see the federal government destroyed. It was local loyalty to his home state Louisiana rather than to the federal government that swayed his decision to fight for the South.

Beauregard was born at the "Contreras" plantation in St. Bernard Parish outside New Orleans, to a white Creole family. He attended New Orleans schools and then went to a "French school" in New York City. He trained at the United States Military Academy at West Point, New York. He graduated in 1838, 45th in class and excelled both as an artilleryman and military engineer.

During the Mexican-American War, Beauregard served as an engineer under General Winfield Scott. He was brevetted to captain for the battles of Contreras and Churubusco and again to major for Chapultepec, where he was wounded in the shoulder and thigh.

In 1841, Beauregard married the former Marie Laure Villeré, the daughter of Jules Villeré, a sugar planter in Plaquemines Parish. Marie was a paternal granddaughter of Jacques Villeré, the second governor of Louisiana. The couple had three children: René, Henry, and Laure. Marie died in 1850. Ten years later, the widower Beauregard married Caroline Deslonde, the daughter of André Deslonde, a sugar planter from St. James Parish. Caroline was also a sister-in-law of John Slidell, a U.S. senator from Louisiana and later a Confederate diplomat.

Beauregard briefly entered politics in his hometown and was narrowly defeated in the election for mayor of New Orleans in 1858. He was chief engineer in charge of drainage in New Orleans from 1858 to 1861, and directed the building of the federal customs house there. He then returned to teach at West Point, where he rose to become the superintendent of the Military Academy in January 1861, but resigned after only five days, when Louisiana seceded from the Union.

Beauregard entered the Confederate Army as a brigadier general in March 1861, but was promoted on July 21 to be one of the eventual eight full generals in the Confederate Army; his date of rank made him the fifth most senior general. He recommended stationing strong forces to protect New Orleans, but was overruled by President Davis. Hence began the friction between Beauregard and Davis that would intensify as years progressed.

Beauregard's first assignment from the Confederate government was command of the forces in Charleston, where he opened fire on the Union-held Fort Sumter. This was the start of the American Civil War, but no one was killed in the exchange. Beauregard and General Joseph E. Johnston of Virginia led Confederate forces to victory in the First Battle of Bull Run (First Manassas), where they defeated Major General Irvin McDowell, one of Beauregard's West Point classmates. During the battle, he employed Quaker Guns, something he would again use in subsequent battles.

After Bull Run, Beauregard advocated the use of a standardized battle flag other than the "Stars and Bars" national flag in order to avoid visual confusion with the U.S. flag. He worked with Johnston and William Porcher Miles in creating and producing the Confederate Battle Flag. Throughout his career he worked to systematize the use of this flag and helped to make it the most popular symbol of the Confederacy.

Beauregard was transferred to Tennessee and assumed command of Confederate forces at the Battle of Shiloh when General Albert Sidney Johnston was killed. Although successful the first day of battle, April 6, 1862, Beauregard called off the attack prematurely, assuming that the Union army was defeated. He was forced to retreat the second day after Major General Ulysses S. Grant received reinforcements and counterattacked. Beauregard later was forced to retreat from his base of supplies, Corinth, Mississippi, by forces under Major General Henry W. Halleck. He then turned over the command of the army to General Braxton Bragg of Alabama.

Beauregard then took command of coastal defenses in Georgia and South Carolina. He successfully defended Charleston from repeated Union attacks from 1862 to 1864. In 1864, he assisted Robert E. Lee in the defense of Richmond. He defeated Benjamin Butler in the Bermuda Hundred Campaign near Drewry's Bluff. He followed this victory with a desperate defense of Petersburg. His tiny 2,200-man force resisted an assault by 16,000 Federals, known as the Second Battle of Petersburg. He gambled by withdrawing his Bermuda Hundred defenses to reinforce Petersburg. He assumed that Butler would not capitalize on the opening. His gamble succeeded, and he held Petersburg long enough for Lee's army to arrive.

Self-confident in the wake of this victory over Butler, Beauregard proposed to Lee and Davis that he lead a great invasion of the North, which would defeat Grant and Butler and win the war. Instead, probably to remove him as an irritant to Lee in Virginia, Beauregard was appointed commander of Confederate forces in the West. Since all of his forces were engaged elsewhere (in Tennessee, Alabama, and Mississippi), he had insufficient resources to halt the superior Union forces under William Tecumseh Sherman in their march to the sea. He and Joseph E. Johnston surrendered to Sherman near Durham, North Carolina, in April 1865. 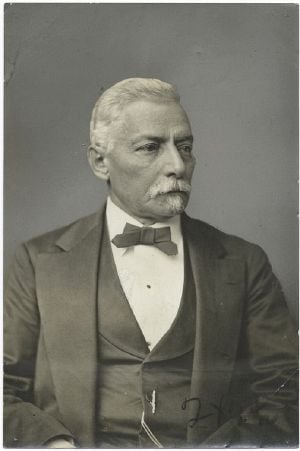 After the war, Beauregard spoke in favor of civil rights and voting for the recently freed slaves, an opinion uncommon among high-ranking Confederates. Beauregard was a Democrat who worked to end Republican rule during Reconstruction.

Beauregard's military writings include Principles and Maxims of the Art of War (1863), Report on the Defense of Charleston, and A Commentary on the Campaign and Battle of Manassas (1891). He was the uncredited co-author of The Military Operations of General Beauregard in the War Between the States (1884). He contributed the article "The Battle of Bull Run" to Century Illustrated Monthly Magazine in November 1884. Beauregard and Davis published a series of bitter accusations and counter-accusations and blamed each other in retrospect for the Confederate defeat.

General Beauregard declined offers to take command of the armies of Romania (1866) and Egypt (1869). Instead he became involved in promotion of railroads, both as a company director and a consulting engineer. He was the president of the New Orleans, Jackson & Mississippi Railroad from 1865 to 1870, and president of the New Orleans and Carrollton Street Railway, 1866 to 1876, for which he invented a system of cable-powered street railway cars.

Beauregard served in the government of the State of Louisiana, first as adjutant general for the state militia (later National Guard), and then less successfully as manager of the Louisiana Lottery. Though considered personally honest, he failed to reform corruption in the lottery. Perhaps the leading critic of the lottery on moral grounds was Benjamin M. Palmer, longtime pastor of the First Presbyterian Church of New Orleans, who worked to kill the project.

In 1888, Beauregard was elected as New Orleans' commissioner of public works.

P.G.T. Beauregard died in New Orleans and is interred in the tomb of the Army of Tennessee in the historic Metairie Cemetery there. Beauregard Parish in western Louisiana and Camp Beauregard, a National Guard camp near Pineville in central Louisiana, are named in his honor.