This article is about the nineteenth century poet. For his son, the American Supreme Court jurist, see Oliver Wendell Holmes, Jr..

Oliver Wendell Holmes Sr., (August 29, 1809 – October 7, 1894) was a physician by profession but achieved fame as a writer; he was one of the best regarded American poets of the nineteenth century. Holmes was a member of the Fireside Poets, a group of American poets that were among the first to rival their British counterparts.

One of the United States' most popular nineteenth century poets, his works include the poem "Old Ironsides" and the collection of essays and poems, "The Autocrat of the Breakfast Table." The latter displays his "Yankee ingenuity" and wisdom and places Holmes in the traditions leading back to the founding spirit of the country.

Holmes also made some interesting scientific observations particularly on the role of poor sanitation in hospitals and the incidence of infectious diseases.

Oliver was born at Cambridge, Massachusetts, on August 29, 1809, in a home near Harvard Yard where it was said the Battle of Bunker Hill was planned.[1] His father was Abiel Holmes (1763-1837), a Calvinist clergyman and avid historian who had authored Annals of America, a critically praised work for which he was granted an honorary doctorate from the University of Edinburgh. His mother was Abiel Holmes's second wife, Sarah Wendell, of a prominent New York family. Through her, Dr. Holmes was descended from Massachusetts Governors Thomas Dudley and Simon Bradstreet and his wife, Dudley's daughter, Anne Bradstreet, the first published American female poet. In 1840, Holmes married Amelia Lee Jackson, daughter of the Hon. Charles Jackson (1775-1855), formerly Associate Justice of the Massachusetts Supreme Judicial Court. Their son was the Civil War hero and American jurist Oliver Wendell Holmes, Jr. He was educated at Phillips Academy in Andover, Massachusetts, and at Harvard College. In 1833 Holmes attended the famed École de Médecine in Paris. He pursued his medical studies in the Parisian hospital system, popularly viewed as the birthplace of modern medicine and the modern style of medical education[2], at institutions such as La Charité and La Pitié Salpêtrière. Holmes was a student of Dr. Pierre Charles Alexandre Louis, who demonstrated the ineffectiveness of bloodletting as a treatment for fevers and other disorders, which had been a mainstay of medical practice since antiquity.[3][4] Dr. Louis was one of the fathers of the méthode expectante, the therapeutic doctrine claiming that the physician's role was only to assist nature as it healed. Upon his return to Boston, Oliver Wendell Holmes, Sr. became one of leading proponents of the méthode expectante in America.[5]. Holmes' M.D. degree was ultimately granted from Harvard, where he would later become Parkman Professor of Anatomy and Physiology. He also served on the faculty of Dartmouth Medical School from 1838 to 1840.[6]

He first attained national prominence with his poem Old Ironsides about the eighteenth century frigate USS Constitution, which was to be broken up for scrap; the poem generated public sentiment that resulted in the preservation of the historic ship as a monument. One of his most popular works was The Autocrat of the Breakfast Table. He was one of the five members of the group known as the Fireside Poets. He contributed poems and essays to the Atlantic Monthly from its inception, and also published novels. Holmes is also known for his writing of several religious-themed hymns.[7]

The Fireside Poets (also known as the Schoolroom or Household Poets)[8] were a group of nineteenth-century American poets from New England. The group is typically thought to comprise Henry Wadsworth Longfellow, William Cullen Bryant, John Greenleaf Whittier, James Russell Lowell, and Holmes,[9] who were the first American poets whose popularity rivaled that of British poets, both at home and abroad. The name "Fireside Poets" is derived from that popularity: The Fireside Poets' general adherence to poetic convention—standard forms, regular meter, and rhymed stanzas—made their body of work particularly suitable for memorization and recitation in school and also at home, where it was a source of entertainment for families gathered around the fire. The poets' primary subjects were the domestic life, mythology, and politics of America, in which several of the poets were directly involved.

In 1843, Holmes published The Contagiousness of Puerperal Fever which argued that puerperal fever, a deadly disease of women giving birth, was frequently carried from patient to patient by physicians and nurses.[10] A few years later, Ignaz Semmelweis would reach similar conclusions in Vienna, where his introduction of prophylaxis (handwashing in chlorine solution before assisting at delivery) would lower the puerperal mortality rate considerably. Holmes, seeing more clearly than Semmelweis that something like microbial action must be involved was altogether more radical. A physician in whose practice even one case of puerperal fever had occurred, wrote Holmes, had a moral obligation to purify his instruments, burn the clothing he had worn while assisting in the fatal delivery, and cease obstetric practice for a period of at least six months. His famous essay was an uncanny anticipation of Pasteur's discovery of the germ theory of disease later in the century.

Holmes's essay had a major impact. Though it largely escaped notice when published as an article in a Boston medical journal, it commanded a great deal of attention when it reappeared as a book several years later, on the occasion of an attack on Holmes by two famous professors of obstetrics who denied his theory of contagion. Republished with a new and powerfully written introduction by Holmes, "The Contagiousness of Puerperal Fever" then became a center of controversy on both sides of the Atlantic. By the 1860s, as Holmes himself would remark in "The Professor at the Breakfast Table," both American and British physicians had come to understand that a physician or midwife who assisted at puerperal fever case must cease obstetric practice until the threat of contagion was past. In New England, where Holmes's arguments had their earliest and most pronounced influence, the death rate from puerperal fever dropped dramatically.

In 1846, in a letter to William T. G. Morton, the dentist who was the first practitioner to publicly demonstrate the use of ether during surgery, Holmes coined the word anesthesia.

Holmes was a vocal critic of homeopathy. In 1842 he published an essay Homeopathy and Its Kindred Delusions[11] in which he denounced the practice. 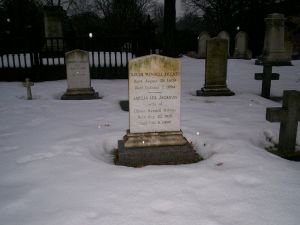 Holmes died quietly after falling asleep in the afternoon of Sunday, October 7, 1894.[12] He is buried in Mount Auburn Cemetery in Cambridge, Massachusetts.

Dr. Holmes developed the popular model of the stereoscope, a nineteenth century entertainment in which two identical pictures were viewed in 3-D. He was widely known and admired during his life. The noted Sherlockian Michael Harrison conjectured that the British author Arthur Conan Doyle drew one inspiration for his famous fictional detective Sherlock Holmes from a real-life self-described "consulting detective" named Wendel Scherer changing "Scherer" to "Sherlock" and "Wendel" to "Holmes" by association with Oliver Wendell Holmes.[13] For many years, Mary Eleanor Wilkins Freeman was his private secretary.

There is a frequently repeated story about Dr. Holmes, but not always mentioning him by name. While awakening from ether induced unconsciousness, he strongly believed he had discovered the key to all the mysteries of the universe. He wrote down the secret, but when his head had cleared he found he'd written "A strong smell of turpentine prevails throughout."[14][15][16]

The school library of Phillips Academy in Andover, Massachusetts is Oliver Wendell Holmes Library, or the OWHL.

Holmes shared with his fellow Americans a bias towards the Indians. "…the white man hates him [the Indian], and hunts him down like the wild beasts of the forest, and so the red-crayon sketch is rubbed out, and the canvas is ready for a picture of manhood a little more like God's own image."[17]

Retrieved from https://www.newworldencyclopedia.org/p/index.php?title=Oliver_Wendell_Holmes,_Sr.&oldid=1087904
Categories:
Hidden category:
This page was last edited on 18 November 2022, at 00:25.
Content is available under Creative Commons Attribution/Share-Alike License; additional terms may apply. See Terms of Use for details.