Norbert Elias (June 22, 1897 - August 1, 1990) was a German sociologist, famous for his development of Process Sociology, or Figurational Sociology. His most significant book, Über den Prozess der Zivilisation (The Civilizing Process), published in 1939, described the growth of civilization in Western Europe, providing a detailed study of the development of the accepted code of manners and social behaviors, and their process of expansion from the etiquette of nobility, or central governing authority, to the general populace.

For Elias, society consists of individuals who are in relationship to each other—a collection of evolving networks of interdependent human beings. To understand society, therefore, is not to understand the intentional actions of individuals acting based on personal motivations, but rather necessitates study of the processes of interaction and relationship among these individuals in their wider, historical context. Thus, Elias advocated the study of process in society, rather than analyzing its current state. 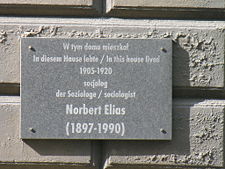 The plaque for Norbert Elias in Wrocław

Norbert Elias was born on June 22, 1897, in Breslau, Germany (today’s Wroclaw, Poland), to Hermann and Sophie Elias. His father was a businessman in the textile industry and his mother, a housewife.

After passing the abitur in 1915, he volunteered for the German army in World War I and was employed as a telegrapher, first at the Eastern, and then at the Western front. After suffering a nervous breakdown in 1917, he was declared unfit for service and was posted to Wroclaw as a medical orderly. That year, Elias began studying philosophy, psychology, and medicine at the University of Wrocław, in addition to spending a term each at the universities of Heidelberg (where he attended lectures by Karl Jaspers) and Freiburg in 1919 and 1920.

To finance his studies after his father's fortune had been reduced by hyperinflation, he took up a job as the head of the export department in a local hardware factory in 1922. In 1924, he graduated with a doctoral dissertation in philosophy, entitled Idee und Individuum, supervised by Richard Hönigswald, a representative of Neo-Kantianism. Disappointed about the absence of social aspects from Neo-Kantianism, Elias decided to turn to sociology for his further studies.

During his Breslau years, Elias was deeply involved in the German Zionist movement, and acted as one of the leading intellectuals within the German-Jewish youth movement, "Blau-Weiss" (Blue-White). During these years he became acquainted with other young Zionists, such as Erich Fromm, Leo Strauss, Leo Löwenthal, and Gershom Scholem.

In 1925, Elias moved to Heidelberg, and in 1930, became assistant of Karl Mannheim at the University of Frankfurt. However, after the Nazis came to power in early 1933, Mannheim's sociological institute was forced to close. His already submitted habilitation thesis, entitled Der höfische Mensch (The Man of the Court), was never formally accepted and was not published until 1969. In 1933, Elias fled to Paris. His elderly parents remained in Breslau, where his father died in 1940; his mother was deported to Auschwitz concentration camp, where she was likely killed, in 1941.

During his two years in Paris, Elias worked as a private scholar, supported by a scholarship from the Amsterdam Steunfonds Foundation. In 1935, he moved on to Great Britain, where he worked on his magnum opus, The Civilizing Process. In 1939, he met up with his former supervisor Mannheim, at the London School of Economics, where he obtained a position as Senior Research Assistant. In 1940, when an invasion of Britain by German forces appeared imminent, Elias was detained at internment camps in Liverpool and on the Isle of Man for eight months, on account of his German citizenship (even though he was a Jew).

Upon his release in 1941, Elias moved to Cambridge. He taught evening classes for the Workers' Educational Association (the adult education organization), and later evening extension courses in sociology, psychology, economics, and economic history, at the University of Leicester. He also held occasional lectureships at other institutions of higher learning. While in Cambridge, he trained as a group therapist under the psychoanalyst Siegfried Heinrich Foulkes, another German emigrant, with whom he co-founded the "Group Analytic Society" in 1952, and worked as a group therapist.

In 1954, he moved to Leicester, where he became a lecturer at the University's Department of Sociology until his retirement in 1962. At Leicester, his students included Martin Albrow and Anthony Giddens.

From 1962 to 1964, Elias taught as professor emeritus of sociology at the University of Ghana in Legon, near Accra. After his return to Europe in 1965, he based himself in Amsterdam but traveled much as a visiting professor, mainly at German universities. His reputation and popularity grew immensely after the re-publication of The Civilizing Process, in 1969. From 1978 to 1984, he worked at the Center for Interdisciplinary Research at the University of Bielefeld.

Elias was the first ever laureate of both the Theodor W. Adorno Award (1977) and the European Amalfi Prize for Sociology and Social Sciences (1987).

Elias focused his work on the relationship between power, behavior, emotion, and knowledge. He significantly shaped what is called “Process Sociology” or "Figurational Sociology."

Throughout his career, Norbert Elias was largely ignored, until the 1970s, when he was rediscovered by a younger generation of sociologists. His late popularity can be partially attributed to the fact that his concept of large social figurations or networks explains the emergence and function of large societal structures without neglecting the aspect of individual agency. In the 1960s and 1970s, the overemphasis of structure over agency came under heavy criticism and Elias' work offered a different perspective.

When Elias' work found a larger audience in the 1970s, at first his analysis of the process was misunderstood as an extension of discredited "social Darwinism," the idea of upward "progress" was dismissed by reading it as consecutive history rather than a metaphor for a social process. Elias, however, offered new paradigm for sociological thought; one that opposed both the structural-functionalist and methodological-individualist tendencies in sociology. He devised a new concept of analyzing social life, one that provided a more systematic and effective approach to analysis society.

There are several distinctive features of Elias’ sociology:

Elias' most important work is the two-volume, The Civilizing Process (Über den Prozess der Zivilisation). Originally published in 1939, it was virtually ignored until its republication in 1969, when its first volume was also translated into English. The work was rather ambitious, attempting to trace the development of manners and personality in Western Europe since the late Middle Ages.

The first volume of The Civilizing Process describes the historical developments of the European habitus, or "second nature," the particular individual psychological structures molded by social attitudes. Elias traced how post-medieval European standards regarding violence, sexual behavior, bodily functions, table manners, and forms of speech were gradually transformed by increasing thresholds of shame and repugnance, working outward from a nucleus in court etiquette. The internalized "self-restraint" imposed by increasingly complex networks of social connections developed the "psychological" self-perceptions that Freud recognized as the "super-ego." The second volume of The Civilizing Process looks into the causes of these processes and finds them in the increasingly centralized Early Modern state and the increasingly differentiated and interconnected web of society.

The Quest for Excitement, written by Norbert Elias with Eric Dunning, and published in 1986, has proved a seminal work for the sociology of sport, and of soccer in particular. Elias also wrote poetry, publishing several books of his poems.

Due to historical circumstances, Elias had long remained a marginal author, until being rediscovered by a new generation of scholars in the 1970s. From that time, he eventually became one of the most influential sociologists. His Process or Figurational Sociology eventually grew into a school of sociology, becoming particularly strong in Europe.

Retrieved from https://www.newworldencyclopedia.org/p/index.php?title=Norbert_Elias&oldid=1087571
Categories:
Hidden category:
This page was last edited on 16 November 2022, at 02:41.
Content is available under Creative Commons Attribution/Share-Alike License; additional terms may apply. See Terms of Use for details.