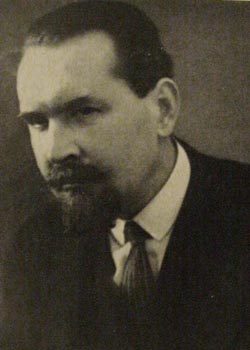 Prince Nikolay Sergeyevich Trubetskoy (Russian: Николай Сергеевич Трубецкой (or Nikolai Trubetzkoy) (April 15, 1890 – June 25, 1938) was a Russian linguist whose teachings formed a nucleus of the Prague School of structural linguistics. He is widely considered to be the founder of morphophonology. Trubetskoy was the son of a Russian prince and philosopher, whose lineage extended back to medieval rulers of Lithuania. In addition to his important work in linguistics, Trubetskoy formulated ideas of the development of Eurasia, believing that it would inevitably become a unified entity. In a time when Europe was sharply divided, such a viewpoint was not welcome except by those (such as Adolf Hitler) who sought to dominate the whole territory by force, enslaving or exterminating any opposition. Trubetskoy rejected Hitler's racist notions as the method of "unification," and suffered persecution and untimely death as a consequence.

Prince Nikolay Sergeyevich Trubetskoy was born on April 15, 1890 in Moscow, Russia into an extremely refined environment. His father was a first-rank philosopher whose lineage ascended to the medieval rulers of Lithuania. Trubetskoy (English), Трубецкой (Russian), Troubetzkoy (French), Trubetzkoy (German), Trubetsky (Ruthenian), Trubecki (Polish), or Trubiacki (Belarusian), is a typical Ruthenian Gedyminid gentry family of Black Ruthenian stock. Like many other princely houses of the Grand Duchy of Lithuania, they were later prominent in Russian history, science, and arts.

The noble family descended from Olgierd's son Demetrius I Starshiy (1327 – May 1399 who died at the Battle of the Vorskla River). Olgierd was ruler of the Grand Duchy of Lithuania from 1345 to 1377, creating a vast empire stretching from the Baltics to the Black Sea and reaching within fifty miles of Moscow. The Trubetzkoy family used the Pogoń Litewska Coat of Arms and the Troubetzkoy Coat of Arms. Nikolay Sergeyevich Trubetskoy was born as the eighteenth generation after Demetrius I.

Having graduated from Moscow University (1913), Trubetskoy delivered lectures there until the revolution in 1917. Thereafter he moved first to the university of Rostov-na-Donu, then to the university of Sofia (1920–22), and finally took the chair of Professor of Slavic Philology at the University of Vienna (1922–1938). On settling in Vienna, he became a geographically distant member of the Prague Linguistic School.

He died in 1938 in Vienna, from a heart attack attributed to Nazi persecution following his publishing of an article highly critical of Adolf Hitler's theories.

Trubetzkoy's chief contributions to linguistics lie in the domain of phonology, particularly in analyses of the phonological systems of individual languages and in search for general and universal phonological laws. His magnum opus, Grundzüge der Phonologie (Principles of Phonology), was issued posthumously and translated into virtually all main European and Asian languages. In this book he famously defined the phoneme as the smallest distinctive unit within the structure of a given language. This work was crucial in establishing phonology as a discipline separate from phonetics.

Trubetzkoy considered each system in its own right, but was also crucially concerned with establishing universal explanatory laws of phonological organization (such as the symmetrical patterning in vowel systems), and his work involves the discussion of hundreds of languages, including their prosody.

Furthermore, his principles of phonological theory have also been applied to the analysis of sign languages, in which it is argued that the same or a similar phonological system underlies both signed and spoken languages.

Principles of Phonology summarized Trubetzkoy's previous phonological work and stands as the classic statement of the Prague Linguistic School's phonology, setting out an array of ideas, several of which still characterize the debate on phonological representations. Through the Principles, the publications that preceded it, his work at conferences, and his general enthusiastic networking, Trubetzkoy was crucial in the development of phonology as a discipline distinct from phonetics.

Whereas phonetics is about the physical production and perception of the sounds of speech, phonology describes the way sounds function within a given language or across languages. As phonetics is a cross-language discipline, it is only fitting that Trubetzkoy is credited with the change in phonological focus from diachrony (how languages change over time) to synchrony (study at a particular point in time, the only way to massage a lot of data from various languages without the time reference). Hence, he argued that form (contrast, systemic patterning) must be studied separately from substance (acoustics, articulation), although he did not see the two as completely separate, unlike some of his colleagues, such as Louis Hjelmslev (Trubetzkoy 1936).

Phonology, Trubetzkoy argued, should deal with the linguistic function of sounds (their ability to signal differences in word-meaning), as members of phonemic oppositions. The phoneme was his smallest phonological unit, as "oppositions" existed only within a language’s system. Thus he did not regard them as autonomous segmental building blocks, which they later became as the "distinctive features" of Roman Jakobson.

Trubetzkoy is also, and above all, the founder of morphophonology, the branch of linguistics that studies the phonological structure of morphemes, the smallest lingual unit that carries a semantic interpretation. Morphophonology, as defined by Trubetzkoy, refers to the way morphemes affect each other's pronunciation (Trubetzkoy 1939).

Trubetzkoy also investigated the neutralization of contrast, which helped reveal segmental (un-) marked-ness, and introduced the notion of "functional load" which was later developed by André Martinet.

Trubetzkoy, being basically Ferdinand de Saussure’s second-generation follower (albeit affected by the Prague Linguistic School whose members regarded it as their "destiny" to remake Saussure for the real world), believed, as many linguists have since, that a significant problem with Saussure’s major work may lie with a certain “staleness” and the need for Saussure's work to be open to major discussions and improvements. Part of this problem can be identified as stemming from the two students who did not add Saussure’s later ideas and concepts into the publication, rather than weaknesses in Saussure's own thinking.

Hence, in one of his letters to Roman Jakobson he wrote: “For inspiration I have reread de Saussure, but on a second reading he impresses me much less.... There is comparatively little in the book that is of value; most of it is old rubbish. And what is valuable is awfully abstract, without details.” (Trubetzkoy 2001)

Europe and Mankind is Trubetzkoy's other, non-linguistic, serious interest, which historically preceded Principles. As an introduction, his famous credo serves a good stead here:

By its very nature Eurasia is historically destined to comprise a single state entity. (Trubetzkoy 1991)

Trubetzkoy apparently denies any meaningful political substance to the relations between European states. For him, they form a single political entity, though subdivided culturally, driven by Pan-European chauvinism constituted through a combination of self-interest and a European mission to "civilize."

Trubetzkoy’s position is often couched as cosmopolitanism, although some critics say that, in essence, it is only another facet of chauvinism. They feel that the only viable alternative to both "Europe" and (Eurocentric) "humankind" would be an intermediate entity, similar to Europe in its intrinsic cultural diversity, but different in what makes it hang together politically. And therein lies a problem.

Whereas conventional Western middle-grounds are usually sought on the terrain of international law and customary diplomatic practices, Trubetzkoy’s alternative, Pan-Eurasian nationalism, is rooted on two different levels, territorial and metaphysical, deliberately bypassing any legal structures. Trubetzkoy’s history and pledge is, however, profoundly Western in its logical structure.

Basically, Trubetzkoy’s feelings did not differ from those of other political émigrés in the history of the civilization. He was, however, unique in his belief that he could make a difference via his Pan-Eurasian publications and speeches. Hence, characteristically, Trubetzkoy wrote in a letter to Savitskii in 1925:

I am plainly terrified by what is happening to us. I feel that we have got ourselves into a swamp that, with every new step of ours, consumes us deeper and deeper. What are we writing about to each other? What are we talking about? What are we thinking about? – Only politics. We have to call things by their real name – we are politicking, living under the sign of the primacy of politics. This is death. Let us recall what We are. We – is a peculiar way of perceiving the world. And out of this peculiar perception a peculiar way of contemplating the world may grow. And from this mode of contemplation, incidentally, some political statements may be derived. But only incidentally! (Trubetzkoy 1991)

Trubetzkoy was crucial in the development of phonology as a discipline distinct from phonetics, and the change in phonological focus from diachrony to synchrony. He is, above all, the founder of the branch of linguistics known as morphophonology, the study of the phonological structure of morphemes.

He was an internationalist, and had contact with most of the other well-known thinkers in phonology of the period, including Sapir, Hjelmslev, and Firth. He corresponded widely and was a serious organizer, aiming to work with those who agreed with him that a truly "phonological" approach was necessary. He worked to set up an International Phonology Association.

Trubetzkoy was, indeed, an internationalist in more ways than one. His Eurasian ideas and sociological treatises published throughout the 1920s and 1930s in Russian and German (some are collected and translated in Trubetzkoy 1991) preceded the ideas and themes that became seriously studied and pursued by the European Union by 80 years.