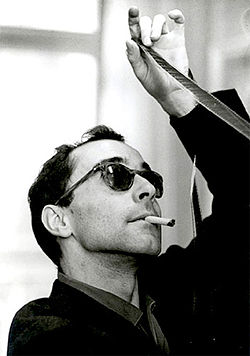 New Wave (French: la Nouvelle Vague) refers to the style of a group of French filmmakers of the late 1950s and 1960s, allied in their rejection of the received tradition of French cinema. Many of the best-known New Wave artists began their careers writing for the film criticism magazine, Cahiers du Cinema.

The New Wave filmmakers were linked both by their rejection of classical cinematic form and their spirit of youthful iconoclasm. Many also reflected in their work the social and political upheavals of the era. Through their radical experiments with editing, visual style, and narrative they emulated the general break that was taking place in French culture between free experiment and the older conservative paradigm.

Origins of the movement

The peak of French New Wave cinema was between 1958 and 1964, although popular New Wave works continued to be produced as late as 1973. The movement's origin goes back to World War II, when France was an occupied country beset with internal tensions created by a population that, in part, resisted and, in part, collaborated with the Nazis. This dichotomy took a toll on the nation's psyche, and when the war ended in 1945, many embittered and confused individuals were eager for the emergence of an enlightened culture.

The philosophy of existentialism expressed the attitude of a select class of citizens, as it stressed the unique position of the individual as a self-determining agent, responsible for his or her own validity in life. The crux of the French existentialist spirit of this era was to fight indifference and conformity through authentic action, taking full responsibility for one's decisions, as opposed to playing preordained roles dictated by society. On the other hand, much of French society adhered to the familiar traditions of life as it was before the war, and this was expressed culturally in the creation of new motion pictures in the classical French film-making tradition. Opposed to this conservative trend, the existentialist movement served as the catalyst for the New Wave rebellion.

Andre Bazin was a film theorist and critic who is often regarded as the spiritual father of Nouvelle Vague. He led the charge in his critique on the old culture's reliance on past forms, particularly the way these forms could force the audience to submit to a "dictatorial" plot-line. Alongside Jacques Doniol-Valcroze and Joseph-Marie Lo Duca, Bazin was a co-founder of the influential magazine, Cahiers du cinéma. The journal served as the pulpit for the lead voices in the New Wave movement, including contributors Jacques Rivette, Jean-Luc Godard, Éric Rohmer, Claude Chabrol, and François Truffaut, who wrote at-length, attacking the classic style of French cinema.

This early group, pressed by their commitment to create a new, more creative form of cinema, reconstructed concepts of how a film could be made, as well as the greater purpose that cinema could serve. Their desire was for films to become as worthy of academic study as any other art. This was the intellectual birth of Nouvelle Vague.

The filmmakers most respected by the writers of Cahiers du cinéma were 1930s French directors Jean Renoir and Jean Vigo, as well as Italian neo-realists Roberto Rossellini and Vittorio De Sica. The movement was highly critical of Hollywood. However, the magazine expressed respect for several American directors, including Alfred Hitchcock, Nicholas Ray, John Ford, Orson Welles, and Howard Hawks. Truffaut discussed these "authors" in his 1954 article, "La qualité française" ("The Tradition of Quality"), which would lay the groundwork for the conceptual definition of the New Age style of filmmaking. The crux of this new tradition was that the film should be a personal expression of its director (author), with a personal signature visible from film to film.

In the late 1950s, the Cahiers du Cinéma critics were granted the opportunity to put their theories into practice when film subsidies were instituted by the Gaullist government. The founding group of French New Wave directors initially collaborated and assisted each other, which helped in the development of a common and distinct use of form, style, and narrative, which was to make their work instantly recognizable. These filmmakers took a low-budget approach, which forced them to focus only on the essential art form. This resulted in a very simple, organic look and feel, to which many audiences easily related.

Based on the initial success of early New Wave films such as Chabrol's Le Beau Serge (1958), Truffaut's international success, Les Quatre cents coups (1959), and Godard's À bout de souffle (1960), soon other talents joined the scene who were not a part of the core Cahiers du Cinéma contingent. These included Louis Malle, Alain Resnais, Agnès Varda, Robert Bresson, and Jacques Demy. From here, the movement would flourish with its large collection of underground classics, in addition to a substantial amount of financial and critical success and a growing international audience.

The five Cahiers directors (Truffaut, Godard, Chabrol, Rivette, and Rohmer) made 32 films between 1959 and 1966. After 1964, the key elements of the French New Wave were already starting to enter mainstream cinema. The directors, meanwhile, began to branch off from each other, diverging more in style as they developed their own distinct pictorial and narrative voices.

Serious in underlying tone but often displaying an anarchistic sense of humor, New Wave films were made not only to tell a story, but to question cinema itself by drawing attention to the conventions used in filmmaking. By intentionally contradicting traditional methods, the French New Wave directors strove to present a flip side to traditional cinema.

French New Wave cinema was a distinct personal genre, even autobiographical. Characters were often highly marginalized individuals, young bohemians, and loners, with no family ties. They were spontaneous and anti-authoritarian, with a general disdain for politics, expressed, for example, as a disillusionment with the foreign policy concerning Algeria and Indo-China. Characters rarely played the normal roles expected of them by society.

New Wave directors usually kept their distance from the studio, preferring to shoot on location. They used the lightweight hand-held cameras designed normally for documentary use, faster film stocks which required less light, as well as lighter sound and lighting equipment. The use of portable, flexible equipment allowed their films to be shot quickly at low costs, which gave room for more experimentation and improvisation.

Many of the French New Wave films were shot in a local apartment, using the director's friends as the cast and crew. Directors were also forced to improvise with equipment—for example, using a shopping cart for "tracking" shots. Efforts to save on the cost of film turned into stylistic innovations. For example, in Jean-Luc Godard's Breathless, several scenes feature jump cuts in which parts of a long scene were simply cut from the middle of the take.

On-location shooting also created a more casual and natural look to the scenes; the mise-en-scène of Parisian streets and coffee bars became a defining feature of the films. The mobile camera could be used in highly inventive ways, with a great deal of fluid panning and tracking: Following characters down streets, into cafes and bars, or looking over their shoulders to watch life go by.

French New Wave films also had a free editing style that consciously broke many of the editing rules of most Hollywood companies. This included the use of frequent jump cuts or the insertion of seemingly irrelevant material extraneous to the story, just for fun, which reminded the audience that they were, after all, watching a film. Additionally, long takes were very common, as was the use of "real time," such as during a famous traffic jam sequence in Godard's 1967 film, Week End.

New Wave actors were typically encouraged to improvise their lines, or to even talk over each other's lines, to maintain an exchange between individuals that was more true to life. This style would sometimes result in lengthy scenes of inconsequential dialog, in contrast to the heavy-scripted speeches of more traditional film acting. Monologues were also used, as were voice-overs that expressed the character's inner feelings.

A reflection of the acting and the spirit of the New Wave style were the films' loosely constructed scenarios, sudden shifts in tone, and many other unpredictable elements, creating an impression on the audience that anything might happen next. New Wave films were also often characterized by open endings and with situations and conflict left unresolved.

Many of these techniques were so outrageous that Jean-Luc Godard has been accused of having contempt for his audience. His stylistic approach can be seen as a radical struggle against mainstream cinema, or as an audacious assault on the viewer’s naiveté.

As with most art-film movements, the innovations of the New Wave trickled down to the American cinema. Beginning with Arthur Penn's Bonnie and Clyde (1967), the generation of young American filmmakers of the late 1960s and early 1970s, known as New Hollywood, displayed and admitted to a conscious influence from the French tradition of the previous decade. Names associated with this movement in American filmmaking include: Robert Altman, Francis Ford Coppola, Brian De Palma, Roman Polanski, and Martin Scorsese. Bob Rafelson, a member of the New Hollywood movement and director of Five Easy Pieces, claimed that the Marx Brothers and the French New Wave influenced his vision for the television series, The Monkees, which he created and oversaw.

Likewise, the influence of the New Wave movement was seen in a number of other national cinemas globally. Similar movements arose in a number of European countries, and a large Nuberu Nagu (Japanese for "New Wave") arose in Japan during the early 1960s.[1]

Many contemporary filmmakers, including Quentin Tarantino and Wes Anderson, also claim influence from the New Wave as well. Tarantino dedicated Reservoir Dogs to Jean-Luc Godard and named his production company A Band Apart, a play on words of the Godard film, Bande à part.

Retrieved from https://www.newworldencyclopedia.org/p/index.php?title=New_Wave&oldid=1015891
Categories:
Hidden category:
This page was last edited on 20 November 2018, at 16:11.
Content is available under Creative Commons Attribution/Share-Alike License; additional terms may apply. See Terms of Use for details.