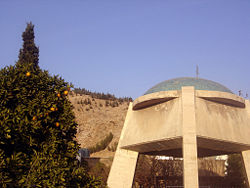 The Muzaffarids (آل مظفر in Persian) were a Sunni family that came to power in Iran following the breakup of the Ilkhanate in the fourteenth century. The last ruler of the dynasty died in 1393, when he was captured and decapitated by Timur's army. The Muzaffarids belonged to the Hanbali school and acknowledged the Abbasid caliph. Dynasties in Iran rose and fell rapidly at this period in history; the Timurids (1393-1469) would also last less than a century, as would successive dynasties until the rise of the Safavids. The Muzaffarid rulers did not earn the type of fame that makes their names universally known, although the dynasty did give its name to an architectural style.

Yet, despite the general instability of the wider-world and periods of internal instability, they were still able to stabilize society sufficiently enough to allow cultural life to flourish. The second Muzarrafid ruler, Shah Shuja was a patron to the great Iranian poet, Hafiz, who has been described as the poet of all humanity. The ruler encouraged liberality and freedom, providing a context in which universal ideals could flourish; Hafiz explores the human condition, meaning and purpose. The Muzaffarids may have faded from memory but the cultural contributions they nurtured continue to enrich the lives of millions.

The Muzaffarids originated as an Arab family that settled in Khorasan from the beginning of Caliphal rule there. They stayed in Khorasan up until the Mongol invasion of that province, at which point they fled to Yazd. Serving under the Il-Khans, they gained prominence when Sharaf al-Din Muzaffar was made governor of Maibud. He was tasked with crushing the robber-bands that were roaming around the country.

Sharaf al-Din's son, Mubariz ad-Din Muhammad, was brought up at the Il-Khan's court but returned to Maibud upon the death of the Il-Khan Öljeitü. In around 1319 he overthrew the atabeg of Yazd and was subsequently recognized as governor of the city by the central Il-Khan government.[1] Following this he began fighting against the Neguderis, a Mongol tribal group. He managed to face this crisis with a minimum of loss.

In the wake of the loss of Il-Khan authority in central Iran following the death of Abu Sa'id, Mubariz ad-Din continued to carry out his expansionary policy. In 1339 or 1340 he invaded the province of Kirman and seized it from its Mongol governor, Kutb al-Din b. Nasir. Kutb al-Din was able to retake the province for a short time after receiving aid from the Kartid dynasty of Herat, but Mubariz al-Din permanently gained control of Kirman in late 1340. The city of Bam was besieged and conquered a few years after this.

After the conquest of Kirman, Mubariz al-Din became a rival of the neighboring Injuids, who controlled Shiraz and Isfahan. Although the Muzaffarids and Injuids had traditionally been on friendly terms with one another, the Injuid Abu Ishaq's desire to gain Kirman led him to start a drawn-out conflict with the Muzaffarids in 1347. He unsuccessfully besieged Yazd (1350-1351), after which his fortunes declined rapidly. Defeated on the field in 1353, Abu Ishaq was forced to take refuge in Shiraz and finally surrender. He managed to escape from Shiraz and fled to Isfahan, but Mubariz al-Din pursued him, took the city and executed the Injuid ruler.[2] Fars and western Iran were now under his control.

With the destruction of Injuid authority, the Muzaffarids were the strongest power in central Iran, and Shiraz was made their capital. Mubariz al-Din's strength was such that when the khan of the Golden Horde, Jani Beg, sent an offer to become his vassal, he was able to decline. In fact, he pushed on into Azerbaijan, which Jani Beg had conquered in 1357. He defeated the khan's governor Akhichuq and occupied Tabriz, but realized that he could not hold his position against the Jalayirid troops marching from Baghdad and soon retreated. The Jalayirids would therefore maintain a hold on Tabriz, despite further attempts by the Muzaffarids to take it.

Mubariz al-Din was known as a cruel ruler, and soon afterwards 1358, his son Abu'l Fawaris Shah Shuja blinded and imprisoned him.[3] A temporary reconciliation was reached, but it failed to last and he died, again in prison, in 1363.

The Reign of Shah Shuja

Shah Shuja proved to be a less of a tyrannic figure, but he was constantly fighting with his brothers, causing a long period of instability. Under his rule, however, a "liberal spirit of freedom and tolerance was in vogue."[4] In 1363 he marched against his first brother Shah Mahmud, who had been given control of Isfahan, although a peace was soon brokered. In the following year however, Shah Mahmud, with the support of his father-in-law Shaikh Uvais of the Jalayirids, invaded Fars and captured Shiraz. Shah Shuja would not be able to reconquer his capital until 1366. Shah Mahmud would continue to play and influential role in Iranian politics, using his marriage alliance to claim Tabriz from the Jalayirids after Shaikh Uvais died in 1374. He occupied the city but soon gave up after he was struck by illness. He died the next year, allowing Shah Shuja to occupy Isfahan.

Shah Shuja then marched on Tabriz himself, but was forced to turn back when internal conditions in Fars deteriorated. His second brother Shah Muzaffar's son, Shah Yahya, rose in revolt in Isfahan. Having to make peace with the Jalayirids, Shah Shuja offered to marry his son Zain Al-Abidin to a sister of the Jalayirid ruler Husain. The Jalayirids refused the offer and invaded, although Shah Shuja managed to prevent them from getting any further than Sultaniyya. Before dying in 1384, he named his son Zain al-Abidin his successor and his third brother 'Imad ad-Din Ahmad as governor of Kirman. Not satisfied with the arrangement, Shah Yahya advanced against Shiraz, but was expelled from Isfahan by the city's populace and was forced to flee to Yazd. On his deathbed, Shah Shuja wrote a letter to Timur, who was then campaigning in Azerbaijan, in which he gave his sons' loyalty to the conqueror.

When Zain Al-Abidin succeeded his father, he quickly ignored the declaration of loyalty. Timur therefore marched into the Muzaffarid lands. He came to Isfahan, where the governor gave him control of the city, but a rebellion in the city killed any goodwill Timur had, resulting in a slaughter of the populace. Zain Al-Abidin fled from Shiraz in an attempt to make it to the Jalayirids in Baghdad, who were enemies of Timur. However, he encountered Shah Yahya's brother Shah Mansur, who imprisoned him. Shiraz soon fell to Timur. Shah Mansur and 'Imad ad-Din Ahmad, along with other Muzaffarid princes, went to Shiraz to declare their loyalty, whereupon Timur restored them to their positions. The conqueror soon after returned to Transoxiana; Shiraz was given to Shah Yahya.

Unfortunately, the Muzaffarids soon began to resume their local feuding. Shah Mansur began by expelling Shah Yahya from Shiraz, whereupon Shah Yahya again fled to Yazd. Shah Mansur then conquered Arbaquh, but failed to take Isfahan. Meanwhile, Zain al-Abidin escaped from prison and reached Isfahan. An alliance was then formed between Zain al-Abidin, Shah Yahya and 'Imad ad-Din Ahmad against Shah Mansur. The alliance proved to be unstable, however, and when they met Shah Mansur's army at Furg, Shah Yahya failed to show and 'Imad ad-Din Ahmad quickly retreated. The latter met Shah Mansur again, this time at Fasa, but lost and was captured in Ray. He was blinded and imprisoned. Shah Mansur then approached Kirman, where Sultan Ahmad and Shah Yahya had gone after the events at Furg. He offered a common alliance against Timur, but was rebuffed and thereafter returned to Shiraz.

Timur, who while campaigning elsewhere took note of these events, decided in 1392 that a campaign against Shah Mansur was in order. Shah Mansur gained the Sarbadar Muluk as his ally; Muluk was sent to defend Kashan and the Muzaffarid northern front. By March 1393 Timur had advanced down to Shushtar and Dizful, installing a Sarbadar as governor there. He also freed 'Imad-Din Ahmad from imprisonment. Shah Mansur fled Shiraz, but then turned around and met Timur's forces. With an army weakened by desertions, he fought bravely but was forced to retreat. Attempting to reach Shiraz, he was captured by forces of prince Shah Rukh and was decapitated. The other Muzaffarid princes then again swore allegiance to Timur. They were received honorably by the conqueror, but on May 22 in Qumisha they were executed. Only Zain al-Abidin and Sultan Shibli (another son of Shah Shuja) survived the purge; they were sent to Samarkand. 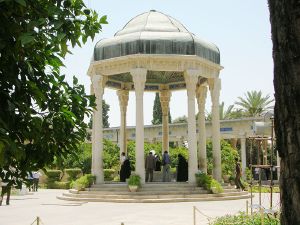 Manz says that the Muzaffarids "are remembered as cultural patrons" and advanced the careers of several important writers, including Hafiz (died 1337), the mystic and poet.[5] Hafiz is widely "considered the greatest poet in the Persian language."[6][7] They also sponsored the theologian, 'Adud al-Din Iji (died 1355). Architecturally, their buildings combined Mongol and Persian and Arabic features, representing cultural fusion. The distinctive feature of the Muzaffarid style was use of "large transverse arches" supporting "barrel vaults" such as those added to the mosque at Yazd.[8] This made it possible to extend roofing over a wider area.[9] Muzaffarid buildings tended not to be symbolic of power.[10] The tiling style known as kāshī flourished.[11]

The Muzaffarids ruled at a time when Iran was on the edge of expanding imperial polities. They emerged from the wreckage of the Mongol empire and fell to another Mongol. Yet while their dynasty lasted, they were significant patrons of culture, sometimes as turmoil and conflict swirled around them. They "failed to rescue Persia from the chaos of civil wars and disruption" after the collapse of the Illkhanate but they did manage to "maintain a minimum of public order and security" that made possible significant cultural achievements.[12] Under Shah Shuja, an "atmosphere of liberty" flourished and bigotry was banished.[4] Fischer says that these cultural achievements are "of greater significance in the history of Iran than the Muzaffarid rulers themselves." Dynasties and rulers come and go but the achievements of writers and thinkers endure, and continue to enrich humanity. The name "Muzaffarid" is not a household name but the poetry of Hafiz is loved by millions; through this poetry, people reflect on the eternal questions of truth and falsehood and fix their minds on that which gives their lives meaning and purpose. Hafiz's poetry stands firmly in what emerged as an Iranian poetic tradition that appeals to people across many of the barriers that divided person from person; he has been described as "the poet of humanity."[13] Perhaps such a spirit could only thrive in a context where bigotry was discouraged at the highest level. The Muzaffarids have faded from memory but the cultural contributions they nurtured continue to enrich human life.

Retrieved from https://www.newworldencyclopedia.org/p/index.php?title=Muzaffarids&oldid=915345
Categories:
Hidden category:
This page was last edited on 28 January 2009, at 21:59.
Content is available under Creative Commons Attribution/Share-Alike License; additional terms may apply. See Terms of Use for details.