The South Korean military has grown from a understaffed and under equipped police force, in 1948, to one of the world's most advanced, well-trained, and well-equipped military forces. Faced with a determined North Korean armed force of approximated one million soldiers, South Korea has required all Korean men to serve two years in the military and also in the reserve forces following. In recent decades, with an increase the economic vitality, South Korea has developed the Army, Navy, Air force, and Marines to the level that they are capable of meeting and countering a North Korean attack by themselves. That has led to a rethinking of United States support in Korea, yet neither the South Korean government nor the U.S. want North Korea to make a mistake like they did in 1950, when they thought the United States would sit back and watch.

Although the National Armed Forces Organization Act stipulates that the ROK Navy includes the Republic of Korea Marine Corps, the ROKMC is a semi-autonomous organization that carries out much of its functions independently.[3] 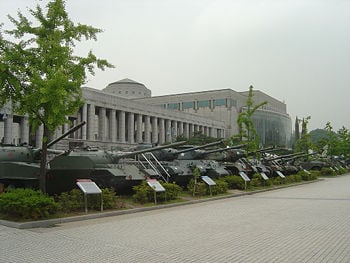 Following the declaration of truce between South Korea and North Korea, the South Korean military set in motion an accelerated program to build a strong, well-equipped military. As South Korea's economy expanded between 1953 to 1980, South Korea became increasingly less dependent upon the United States for equipment, training, and troops, benefiting from several government-sponsored technology transfer projects and indigenous defense capability initiatives. Currently the ROK Navy has embarked on a rigorous ship-building program to create a substantial blue-water navy by 2020. During the Vietnam War, South Korean marines fought alongside the United States, gaining the respect of both the locals and their enemies, earning the nickname as "Demon-hunters" by the Viet Cong.

Today, the ROK military forces maintain the sovereignty and territorial integrity of the republic, often engaging in humanitarian and disaster-relief efforts nation wide as well. More recently, the ROK military has increased participation in international alliances, acknowledging its role and responsibility as the tenth economic power in the world in terms of GDP. The ROK military has participated in various peacekeeping operations across Africa, East Timor, and more recently Iraq and Afghanistan.

The ROK military invested in modernization since the 1980s, continuing to the present. South Korea enjoys of a mix of avant-garde as well as older conventional weapons. The Republic of Korea has one of the largest defense budgets in the world (though second lowest in East Asia), regularly making the list of top ten. Capabilities include many sophisticated American and European weapon systems, complemented by a growing and increasingly more advanced indigenous defense manufacturing sector. The GlobalSecurity.org website states that "in 1990, South Korean industries provided about 70 percent of the weapons, ammunition, communications, and other types of equipment, vehicles, clothing, and other supplies needed by the military."

Today, South Korea has a joint military partnership with the United States as outlined by the Mutual Defense Treaty signed after the Korean War. South Korea also takes part in regional as well as pan-Pacific national military war games and exercises such as RIMPAC and RSOI.

Military service varies according to branch: Twenty-two months for the Army and Marine Corps, twenty four months for the Navy and twenty six months for the Air Force. Recently, significant pressure from the public has demanded either a shortening of the term or a switch to voluntary military service. All branches share a common rank-system, with different colors used to denote the different branches. (Army: Green & Black, Navy: White & Black, Marine Corps: Red & Yellow, Air Force: Green & Blue) 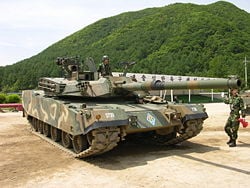 By far, the ROK Army (ROKA) has the largest standing force of the military branches with over 560,000 personnel as of 2004. That comes as a response to both the mountainous terrain native to the Korean Peninsula (70 percent mountainous) as well as the heavy North Korean presence, with its one million strong army, two-thirds permanently garrisoned in the front line near the DMZ.

The current administration has initiated a program of self-defense, enabling South Korea to fully counter a North Korean all out attack, without the help of the United Nations, within the next two decades. Formerly, the ROK Army had been organized into three army groups: The First Army (FROKA), Second Army (SROKA), and Third Army (TROKA), each with its own head quarters, corps, and divisions. The Third Army had responsibility for the defense of the capital as well as the western section of the DMZ. The First Army defended of the eastern section of the DMZ whereas the SROKA formed the rearguard. Under a restructuring plan aimed at reducing redundancy, the First and Third Armies have been incorporated into the newly formed Ground Operations Command (GOC), whereas the Second ROK Army has been converted into the Rear Operations Command (ROC).

The army consists of the Army Headquarters, the Aviation Command, and the Special Warfare Command, with eleven corps, forty nine divisions, and nineteen brigades, some 560,000 troops, 5,350 Tanks/Armored Vehicles, roughly 11,337 Artillery Systems, 7,032 Missile Defense Systems, and 13,000 infantry support systems. Equipment of the ROK Army include the older M47, M48, as well as the more recent, Korean-manufactured K1 and K1A1, hosting a 120 mm smoothbore gun.

The future replacement for the K1 MBT has been baptized the XK2 Black Panther (Korean: 흑표), which will be fitted with a German MTU 1500 hp Europowerpack engine, 120 mm main gun, an optional 140 mm smoothbore main barrel, and coaxial machine guns. The new tank will also feature radar equipment as well as all-bearing LASER detection system and reactive armor comparable to the American M1A2 and French LeClerc.

In addition, South Korea already manufactures the indigenous K-9 Thunder howitzers, which have been exported to Turkey, as well as the K200 series KIFV's which saw action in UN peacekeeping operations as part of the Malaysian peacekeeping forces. A variation of the K200, the KAFV's can be retrofitted to bear a 90 mm barrel or 40 mm grenade turret. The ROK Army also fields the mobile K-SAM Pegasus (Korean:천마), fitted with eight missiles that fly at maximum speeds of mach 2.6, and the K-30 Biho (Korean:비호) series, which feature a 30 mm twin gun system for self-propelled anti-aerial fire support.

Besides having vehicles of their own design as well as American models, the ROK Army also has several Russian-built AFVs, including BMP-3 IFVs and BTR-80 APCs, as well as T-80U MBTs. Although in active service with the Army, Korea purchased most of them to learn technology for ROK's XK2 MBT, such as the Explosive Reactive Armor blocks mounted on several Russian armored vehicles. The ROK Army continually purchases Russian equipment, as their recent addition of two BMP-3U IFVs hints. Other notable foreign equipment in service with the ROK Army includes the TOW ATGM launchers and Mistral MANPADS. 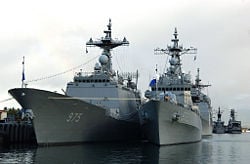 The ROK Navy (ROKN) bares responsibility for conducting naval operations and amphibious landing operations.[4] As a part of its mission, the ROK Navy has engaged in several peacekeeping operations since the turn of the century.[5] The ROK Navy aims to become a blue-water navy by 2020.[5]

In 1995, Admiral An Byeongtae , the 20th Chief of Naval Operations, presented the vision of building a "blue ocean navy" for the future of the ROK Navy in his inaugural address.[6] In 2001, then President Kim Dae-jung, announced a plan for building up a Strategic Mobile Fleet.[7]

The ROK Navy had about 68,000 regular personnel, including the 25,000 Republic of Korea Marine Corps personnel, as of 2006. Some 170 commissioned ships (total displacement of approx. 135,000 tons)[5] furnish the ROK Navy, including approximately ten submarines, seventy five patrol craft, and twenty auxiliaries. The naval aviation forces consist of about ten fixed-wing and fifty rotary-wing aircraft.[5]

The ROK Air Force (ROKAF) boasts a modern air force, fielding some 600+ combat aircraft of American design. In contrast, the North Korean Army has roughly 150-300 more aircraft, but mostly obsolete and some ancient types of Soviet and Chinese origin. Korea began a program for the development of indigenous jet trainers beginning in 1997. That project eventually culminated in the KAI T-50, used as a trainer for jet pilots, dubbed the "Golden Eagle" and currently exported to Indonesia. The modified A-50 compares to an armed version of the T-50, fitted with free-fall or precision missiles such as the AGM-65 Maverick.

Rhe KTX-2 and F-X represent replacement programs for the T-50 and A-50 respectively. The latter has been fulfilled by the Boeing F-15K.[8] The South Korean government announced plans to develop and manufacture helicopters to replace the aging UH-1 helicopters, many of which saw service during the Vietnam War. The program originally included plans for the development of both a civilian and a military helicopter. The government later revised the plan, giving priority to the utility helicopter program. Based on the success and experience of the civilian KMH (Korean Multi-purpose Helicopter), the government plans to develop the attack helicopter sharing a common configuration.

The ROKMC (marine corps) maintains a jurisdictional command independent of the Navy. South Korean Marines have demonstrated their bravery and extensive knowledge of martial arts in combat, receiving respect from allies and enemies. During the Vietnam War the ROKMC earned themselves both the fear and respect of the Viet Cong, up to the point that the communists began to shun combat with the South Korean Marines. During the Vietnam War, they gained the nickname "Ghost-Catching Marines" or "Demon-hunters" (Korean: "귀신 잡는 해병대"). Korean Marines wear distinctive red name tags, a symbol of pride and honor. The ROK Marine Corps coined the motto, "Once a Marine, forever a Marine." 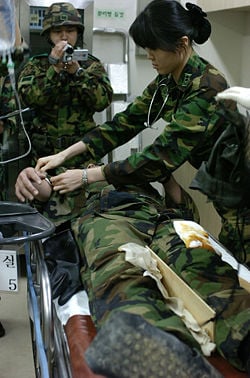 South Korea has successfully participated in UN-sanctioned peacekeeping operations in East Timor, Somalia, Angola, and Western Sahara, as well as serving as Military Observers in the India-Pakistan border and in Georgia. In September 2006, President Roh Moo-hyun announced that the government of Lebanon had officially asked the Republic of Korea to form part of the UN Peacekeeping Forces poised for deployment in Lebanon following the 2006 Israeli-Lebanese Conflict. Final deployment awaits a confirming vote by the Kukhoe (National Assembly).

Peace-keeping operations in Iraq In August 2004, the South Korean government dispatched 3,400 soldiers to Iraq in support of nation-building initiatives and prompted by the beheading of South Korean citizen Kim Sun-il by Islamic extremists in Iraq. That force stood as the third largest in Iraq (surpassed only by the U.S. and UK), after the withdrawal of Spanish forces. South Korea currently holds responsibility for peace-keeping and reconstruction in the Arbil Governorate, located in the Kurdish Autonomous Region. The peace-keeping troops received the name Zaytun Division and Daiman Unit. Zaytun and Daiman respectively mean olive (a symbol of peace) and "always with you" in Arabic.

Retrieved from https://www.newworldencyclopedia.org/p/index.php?title=Military_of_South_Korea&oldid=1004004
Categories:
Hidden category:
This page was last edited on 28 March 2017, at 19:40.
Content is available under Creative Commons Attribution/Share-Alike License; additional terms may apply. See Terms of Use for details.