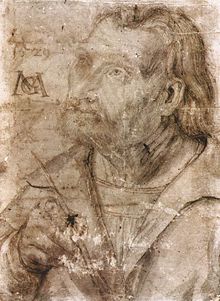 John the Evangelist (long thought to be a self portrait)

Matthias Grünewald or "Mathis" (as first name), "Gothart" or "Neithardt" (as surname), (c. 1470? – August 31, 1528), was an important German Renaissance painter of religious works, who ignored Renaissance classicism to continue the expressive and intense style of late medieval Central European art into the sixteenth century.

Only ten paintings (several consisting of many panels) and 35 drawings survive, all religious. Many others were lost in the Baltic Sea on their way to Sweden as war booty. His reputation was obscured until the late nineteenth century, and many of his paintings attributed to Albrecht Dürer, who is now seen as his stylistic antithesis. His largest and most famous work is the Isenheim Altarpiece in Colmar, Alsace (now in France).

The details of his life are unclear for a painter of his significance, despite the fact that his commissions show that he received reasonable recognition in his own lifetime. His real name remains uncertain, but was definitely not Grünewald; this was a mistake by the seventeenth-century writer, Joachim von Sandrart, 150 years after his death, who confused him with another artist. He is documented in Teutsche Academie der Edlen Bau-, Bild- und Mahlerey-Künste published between 1675 and 1680, as Mathis der Maler, ("Master Mathis" or "Mathis the Painter"), and as using the surnames Gothart and Neithardt - this last may have been his surname, or more likely that of his wife.

He was probably born in Würzburg between 1470 and 1475. It is possible he was a pupil of Hans Holbein the Elder. By 1500, he was a 'free master' and settled in the small town of Seligenstadt, where he bought a house with a pond and opened a workshop for painters and woodcarvers. His first dated painting is probably in Munich, dated 1503.

About 1510 Grünewald received a commission from the Frankfurt merchant Jacob Heller to add two fixed wings to the altarpiece of the Assumption of the Virgin recently completed by the painter Albrecht Dürer. These wings depicting four saints are painted in grisaille (shades of gray) and already show the artist at the height of his powers. Like Grünewald's drawings, which are done primarily in black chalk with some yellow or white highlighting, the Heller wings convey coloristic effects without the use of color.[1]

About 1515 Grünewald was entrusted with the largest and most important commission of his career. Guido Guersi, an Italian preceptor, or knight, who led the religious community of the Antonite monastery at Isenheim (in southern Alsace), asked the artist to paint a series of wings for the shrine of the high altar that had been carved in about 1505 by Nikolas von Haguenau of Strasbourg. The subject matter of the wings of the Isenheim Altarpiece provided Grünewald's genius with its fullest expression and was based largely on the text of the popular, mystical Revelations of Saint Bridget of Sweden (written about 1370).[1]

Another important clerical commission came from a canon in Aschaffenburg, Heinrich Reitzmann. As early as 1513 he had asked Grünewald to paint an altar for the Mariaschnee Chapel in the Church of SS. Peter and Alexander in Aschaffenburg. The artist painted this work in the years 1517-1519. Grünewald apparently married about 1519, but the marriage does not appear to have brought him much happiness (at least, that is the tradition recorded in the seventeenth century). Grunewald occasionally added his wife's surname, Neithardt, to his own, thereby accounting for several documentary references to him as Mathis Neithardt or Mathis Gothardt Neithardt.[1] 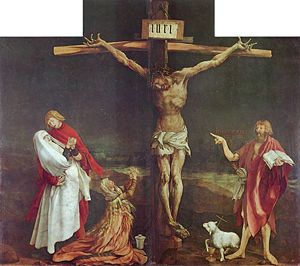 The Crucifixion, central panel of the Isenheim Altarpiece.

Only religious works are included in his small surviving corpus, the most famous being the Isenheim Altarpiece, completed in 1515, now in the Musée d'Unterlinden, Colmar. Its nine images on 12 panels contain scenes of the Annunciation, Mary bathing Christ, Crucifixion, Entombment of Christ, Resurrection, Temptation of St. Anthony and saints.

The Isenheim Altarpiece was executed for the hospital chapel of Saint Anthony's Monastery in Isenheim in Alsace and is now at the Unterlinden Museum in Colmar, a nearby town. It is a carved shrine with two sets of folding wings and three views. The first, with the wings closed, is a Crucifixion showing a detailed, twisted, and bloody figure of Christ on the cross in the center flanked, on the left, by the mourning Madonna being comforted by John the Apostle, and Mary Magdelene kneeling with hands clasped in prayer, and, on the right, by a standing John the Baptist pointing to the dying Savior. At the feet of the Baptist is a lamb holding a cross, symbol of the "Lamb of God" slaughtered for man's sins. The drama of the scene, symbolizing the divine and human natures of Christ, is heightened by the stark contrast between the vibrantly lit foreground and the dark sky and bleak landscape of low mountains in the background. When the outer wings are opened, three scenes of celebration are revealed: the Annunciation, the Angel Concert for Madonna and Child, and the Resurrection. Grünewald's unsurpassed technique in painting colored light is epitomized in the figure of the rising Christ; his dramatic use of writhing forms in movement is also seen here in the figures of Christ, the arriving angel, and the Madonna.[2]

The altarpiece's figures are given uniquely determined gestures, their limbs are distended for expressive effect, and their draperies (a trademark of Grünewald's that expand and contract in accordion pleats) mirror the passions of the soul. The colors used are simultaneously biting and brooding. The Isenheim Altarpiece expresses deep spiritual mysteries.[1]

The Concert of Angels, for instance, depicts an exotic angel choir housed within an elaborate baldachin. At one opening of the baldachin a small, glowing female form, the eternal and immaculate Virgin, kneels in adoration of her own earthly manifestation at the right. And at the far left of the same scene under the baldachin, a feathered creature, probably the evil archangel Lucifer, adds his demonic notes to the serenade. Other details in the altarpiece, including the horribly wounded body of Christ in the Crucifixion, may refer to the role of the monastery as a hospital for victims of the Black Plague and "Saint Anthony's fire," a condition known as ergotoxicosis. The color red takes on unusual power and poignancy in the altarpiece, first in the Crucifixion, then in the Annunciation and Nativity, and finally on Christ's shroud in the Resurrection, which is at first lifeless in the cold tomb but which then smolders and bursts into white-hot flame as Christ ascends, displaying his tiny purified red wounds. Such transformations of light and color are perhaps the most spectacular found in German art until the late nineteenth century. And through all this drama, Grünewald never misses the telling picturesque detail: a botanical specimen, a string of prayer beads, or a crystal carafe.[1]

The Concert of Angels-Nativity panel is known as one of the great interpretive puzzles for critics and art historians. However, it is flanked by easily recognizable representations of the Annunciation and Resurrection. The composition is unique and has caused much consternation for scholars trying to plumb the depths of its meaning.

As well as being by far his greatest surviving work, the altarpiece contains most of his surviving painting by area, being 2.65 meters high and over 5 meters wide at its fullest extent.

Grunewald's art is rooted in the irrational and mystical spiritual traditions of the medieval northern European art, in contrast to the cool logic of the Italian Renaissance, yet he produced an expressive 'realism' equaled only in modern times. He produced what he believed were crucial events in salvation history, presenting them symbolically, yet with realism. Grunewald was not adverse to altering Biblical versions of events to heighten the Christian message and his version of Christian truth was highly personal. His introduction of what appears to be Lucifer and other 'fallen' angels or dark spirits only adds to the realism of his work.

He seems not to have had a real pupil, and his avoidance of the graphic media also limited his influence and renown. Grünewald's works did continue to be highly prized, but the man himself was almost forgotten by the seventeenth century. The German painter Joachim von Sandrart, the artist's fervent admirer and first biographer (Teutsche Akademie, 1675), was responsible for preserving some of the scanty information that we have about the artist, as well as naming him, erroneously and from an obscure source, Grünewald.

At the lowest ebb of his popularity, in the mid-nineteenth century, Grünewald was labeled by German scholarship "a competent imitator of Dürer." However, the late nineteenth-century and early twentieth-century artistic revolt against rationalism and naturalism, typified by the German Expressionists, led to a thorough and scholarly reevaluation of the artist's career.[1]

The Protestant theologian Philipp Melanchthon is one of the few contemporary writers to refer to Grünewald, who is rather puzzlingly described as "moderate" in style, when compared with Dürer and Cranach; which paintings this judgment is based on is uncertain.

By the end of the century, when the Holy Roman Emperor, Rudolph II embarked on his quest to secure as many Dürer paintings as possible, the Isenheim Altarpiece was already generally believed to be a Dürer. In the late nineteenth century he was rediscovered, and became something of a cult figure, with the angst-laden expressionism, and absence of any direct classicism. The Isenheim Altarpiece appealed to both German Nationalists and Modernists.

Joris-Karl Huysmans promoted his art enthusiastically in both novels and journalism, rather as Marcel Proust did for Johannes Vermeer. His apparent sympathies with the peasants in the Peasants' War (1524-1525) also brought him admiration from the political left. Elias Canetti wrote his novel Auto-da-Fé surrounded by reproductions of the Isenheim altarpiece stuck to the wall.

The composer Paul Hindemith based his 1938 opera Mathis der Maler on the life of Grünewald during the Peasants' War; scene Six includes a partial re-enactment of some scenes from the Isenheim Altarpiece.

Retrieved from https://www.newworldencyclopedia.org/p/index.php?title=Matthias_Grunewald&oldid=1086238
Categories:
Hidden category:
This page was last edited on 7 November 2022, at 16:57.
Content is available under Creative Commons Attribution/Share-Alike License; additional terms may apply. See Terms of Use for details.