Mary Anning (May 21, 1799 – March 9, 1847) was an early British fossil collector and paleontologist. She is credited with the discovery of many fossils, including the first specimen of Ichthyosaurus, the first nearly complete specimen of Plesiosaurus, the first British find of a fossil of the flying reptile Perodactylus macronyx, the jawless fish Dapedium politum, the pterosaur Dimorphodon, and the fossil fish Squaloraja, among others.

Hers is a remarkable story. Starting as an uneducated young girl, in poverty, surrounded by family calamities, lacking formal education, and in a world in which women were not admitted to the scientific societies, she became a leading paleontologist, greatly advancing the field and she gradually won international renown and the respect and admiration of her peers. Nonetheless, it was others who formally studied and published on her specimens, often without any recognition that it was she who discovered the fossils.

Mary's discoveries confronted the belief of her time that the Earth was only thousands of years old, providing evidence that the Earth was actually much older. While this understanding of ancient fossils caused many to leave the church, Mary Anning found that her faith helped, rather than hindered, her scientific progress.

Mary Anning was born on May 21, 1799 in Lyme Regis, a small coastal town on the English Channel in the southwest corner of Dorset, a county in England. There were about 1,450 people living in Dorset at the time (Quinsey 2008). Although her parents were to have at least ten children, only she and her brother Joseph survived childhood. In those days, about half of the children under the age of five died, generally from measles and smallpox.

Mary Anning's parents were Richard and Molly Anning. Richard Anning had moved to Lyme from Colyton in Devon. At the age of 27, he was in Blandford, where he married Mary Moore on August 8, 1793. Returning to Lyme, the couple lived in a house built on the town’s bridge, and attended the local Congregational Church, where their children were baptized. Soon after their marriage, a daughter Mary was born. She was followed by a second daughter, Martha, who died almost at once, then by a son Joseph, in 1796. A second son Henry died as an infant early in 1798. Horror struck towards the end of the year, at Christmastime, when the eldest child Mary was burned to death at home, either sitting too close to the fire, or falling into it.

When another daughter was born the following May, she was given the name of her dead sister, Mary, which was also the given name of her mother. This was the Mary Anning that was to gain fame as a fossil finder. At least four further children followed: Henry, 1801; Percival, 1803; Elizabeth, 1804; and Richard, 1809. All died within a couple of years of birth, leaving only two surviving children, Joseph and Mary.

The conditions during much of Mary's early life were difficult, including a famine that struck soon after her birth. At one point, a mob, led by her father, attacked several estates and a mill in an effort to end price gouging and mass starvation. No one was convicted of a crime, however, because no one in Lyme would testify against those charged (Quinsey 2008).

Mary Anning herself was marked out for an unusual life at the age of 15 months when on August 19, 1800, a lightning strike in the village caught four people in the open. Her nurse, Mrs. Haskins, and two teenage girls took shelter from a heavy rain under an elm tree. When it was struck by lightning, all but Mary were killed.

Mary's father Richard was a cabinet maker who supplemented his income by mining the coastal cliff-side fossil beds near Lyme Regis, then selling his finds to tourists. Many times he was joined by Mary, and from him she learned how to collect, clean, polish, and display the fossils for sale. However, Richard died in 1810 of tuberculosis, at the age of 44. Mary was 11 at the time. With his death, the family was left without support. Mary and her brother Joseph began collecting fossils full-time in an effort to earn some income.

Fossil collecting was in vogue in the late eighteenth century and early nineteenth century, at first as a pastime akin to stamp collecting but gradually transforming into a science as the importance of fossils to geology and biology became understood. Anning catered to the commercial side of the field, selling her finds. She soon forged relationships within the scientific community, whose passion for fossils grew to be a major source of income for her. 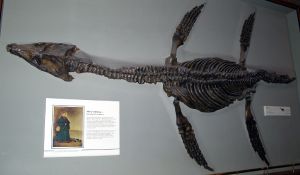 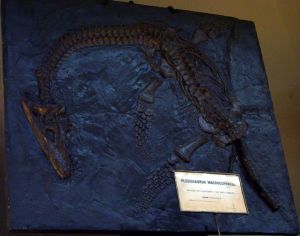 The cause of this connection was one of Anning's first discoveries, the skeleton of an ichthyosaur, in 1811, a few months after her father's death. There are conflicting reports, but it is believed that her brother had discovered the skull of what appeared to be a large crocodile a year earlier. The rest of the skeleton was not to be found at first, but Mary located it after a storm scoured away a portion of the cliff containing it. This was the first complete skeleton of an ichthyosaur ever discovered, although not the first ichthyosaur fossil ever, as the genus had been described in 1699 from fragments discovered in Wales. Nevertheless, it was an important find, and was soon described in the Transactions of the Royal Society. Anning was 12 years old at the time of her discovery. She went on to find two other distinct species of Ichthyosaur.

At the age of 14, in 1813, Mary received her first geology book from a woman in town, who she would do errands for, and Mary became an avid reader of everything that she could learn about geology and paleontology. She also studied and dissected modern animals to learn more about them. She would eventually gain a knowledge that surpassed many paleontologists (Quinsey 2008). As would be stated by Lady Harriat Silvester in her diary (Quinsey 2008):

"The extraordinary thing in this young woman is that she has made herself as thoroughly acquainted with the science that the moment she finds any bones she knows to what tribe they belong. It is certainly a wonderful instance of divine favour - that this poor, ignorant girl should be so blessed, for by reading and application she has arrived to that degree of knowledge as to be in the habit of writing and talking with professors and other clever men on the subject, and they all acknowledge that she understands more of the science than anyone else in this kingdom."

As her reputation grew, Anning came to the attention of Thomas Birch, a wealthy fossil collector. Disturbed by the poverty of Mary and her family he arranged for the sale of his own fossil collection, the proceeds of which (some £400) were given to the Annings. Put on a sure (if somewhat austere) financial footing for the first time in a decade, Mary carried on with her fossil collecting even after her brother gained employment as an upholsterer.

Her next major discovery was a real first, the first-ever skeleton of a plesiosaur in 1821. The fossil she found was subsequently described, by William Conybeare as Plesiosaurus dolichodeirus and is the type specimen (holotype) of the species, which itself is the type species of the genus. She found an "unrivalled specimen" of Dapedium politum, a ray-finned fish, as described in 1828. She discovered an important fossil of a pterosaur, a Pterodactylus macronyx (later renamed by Richard Owen Dimorphodon macronyx), the first found outside Germany and thought to be the first complete skeleton.

Those were the three finds that made her mark on history, but she continued collecting for the remainder of her life, making numerous other contributions to early paleontology. Her success and a growing recognition of her abilities led a number of the more famous scientists of her time to visit her and gain insights from her, such as Louis Agassiz and Richard Owen. However, many who published findings on her fossil discoveries failed to give recognition to her. For example, while Louis Agassiz honored Mary Anning for helping to unlock the secrets of prehistoric fish, Richard Owen described Annings find of Plesiosaurus macrocephalus to the Geological Society of London without ever mentioning her by name (Quinsey 2008).

The Annings were Dissenters, a religious body that separated from and disagreed with the Anglican Church or the Church of England. She began attending the Dissenters' Sunday School around her eighth birthday, and learned to read and write there (Quinsey 2008). Eventually she shifted her faith from dissent to the Established Church (Goodhue 2005).

Her religious journey included a fascination with Benjamin West's painting Christ Rejected and a sophistication in Biblical interpretation. She also took comfort in the Bible in the face of close calls, when she narrowly escaped death, such as when tons of rocks fell around her as she was collecting fossils at the base of the beach clifts and her dog Trey was beside her and was killed (Quinsey 2008). It is said that her piety did not hinder, but rather furthered, her scientific progress (Goodhue 2005). Many were leaving the church with the discovery of ancient fossils, since it was undermining their faith, based on a literal interpretation of the Bible, but Mary remained devout. 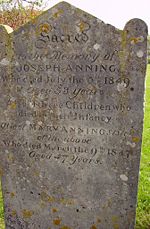 Gravestone of Mary Anning and her brother, Joseph

Taken all together, Mary Anning's discoveries became key pieces of evidence for extinction. Until her time it was widely believed that animals did not become extinct; any oddities found were explained away as still living somewhere in an unexplored region of the earth. The bizarre nature of the fossils found by Anning struck a heavy blow against this argument, and set the stage for real understanding of life in earlier geologic ages.

For a time after her death, Mary dropped into obscurity but, in recent decades, she has been rediscovered. After her death, a eulogy was read at the Geological Society, some members of which subsequently contributed to a stained-glass window to her memory, in the parish church of St Michael the Archangel, the Society having failed to elect her to membership during her lifetime. The inscription reads: "This window is sacred to the memory of Mary Anning of this parish, who died 9 March AD 1847 and is erected by the vicar and some members of the Geological Society of London in commemoration of her usefulness in furthering the science of geology, as also of her benevolence of heart and integrity of life." (It depicts the corporal works of mercy, in other words, feeding the hungry, giving drink to the thirsty, clothing the naked, sheltering the homeless, visiting prisoners and visiting the sick.)

The old tongue-twister, "She sells sea shells by the sea shore," is believed by some to have been written about Mary Anning.

In 2005, a Mary Anning "facsimile" was created at the Natural History Museum as one of a number of notable gallery characters to patrol its displays. She is thus among other luminaries including Carl Linnaeus, Dorothea Bate, and William Smith.

Writer John Fowles in "The French Lieutenant's Woman" (Ch. 8) notes: "One of the meanest disgraces of British palaeontology is that though many scientists of the day gratefully used her finds to establish their own reputation, not one native type bears the name anningii."