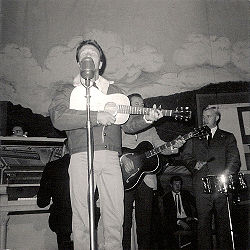 Marty Robbins (September 26, 1925 – December 8, 1982) was one of the most popular American country and western singers of his era. His signature song, "El Paso," an epic story of a gunfighter who dies in the arms of the woman for whom he has killed a man, has become iconic to fans of both country and pop music. Robbins scored numerous other number one country hits that crossed over to the pop charts as well, including "A White Sport Coat," "Singing the Blues," "Don't Worry," "Devil Woman," and "My Woman My Woman My Wife." His smooth, versatile voice found expression in a wide variety of genres, from country standards to ballads, blues, cowboy songs, Hawaiian music, and gospel.

An avid stock car racer, Robbins also made many starts in the NASCAR Winston Cup series and acted in several Hollywood films. He was named "Artist of the Decade" in the 1960s by the Academy of Country Music, was inducted into the Nashville Songwriters Hall of Fame in 1975, and was elected to the Country Music Hall of Fame in 1982. In 1988 he received a posthumous Grammy Hall of Fame Award in 1998 for "El Paso."

Robbins was born Martin David Robinson in Glendale, a suburb of Phoenix, in Maricopa County, Arizona. His father took odd jobs to support the family of ten children, but alcoholism led to divorce in 1937. Among the warmer memories of his childhood, Robbins recalled having listened to stories of the American West told by his maternal grandfather, Texas Bob Heckle, a former Texas Ranger and medicine show performer. Another important influence was western singer Gene Autry. 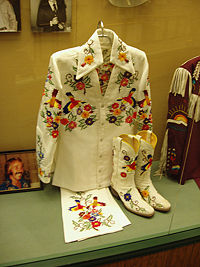 Robbins left his troubled home at the age of 17 to serve in the United States Navy during World War II. He was stationed in the Solomon Islands in the Pacific. To pass the time during the war, he learned to play the guitar, started writing songs, and came to love Hawaiian music.

After his discharge from the military in 1945, he began to play at local venues in Phoenix, then moved on to host his own radio station show on KTYL. He later had his own television show, Western Caravan, on KPHO in Phoenix.

After Grand Ole Opry star Little Jimmy Dickens made a guest appearance on Robbins' TV show, Dickens got Robbins a record deal with Columbia Records. His first records did not sell well, but he scored a Top Ten country hit with his third, "I'll Go On Alone" (1953). The song also won him a contract writing songs for the Acuff-Rose publishing company in Nashville. Robbins had another hit in 1953 with "I Couldn't Keep From Crying." He soon became a popular singing star at the Grand Ole Opry and had several more hits in the mid-1950s.

Robbins' first number one hit was "Singing the Blues" in 1956, which also reached the Top Twenty in the pop field. His "A White Sport Coat" scored another premier country hit in 1957, reaching number two on the pop charts as well. He released an album of Hawaiian songs later that year, and followed this with a collection of Gunfighter Ballads and Trail Songs, featuring his composition and future signature hit, "El Paso."

"El Paso" was released as a single in October, 1959 and became a major hit on both the country and pop music charts, reaching the top spot in both at the start of 1960. It won the first-ever Grammy Award for Best Country and Western Recording in 1961 and is widely considered a genre classic for its gripping narrative, haunting harmonies by Tompall and the Glaser Brothers, and the eloquent Spanish guitar accompaniment by Grady Martin that lends the recording a distinctive Tex-Mex feel. "El Paso" made Robbins a super-star, and he became one of the most popular singers in America in early 1960.

"Don't Worry" (1961) was another cross-over hit, spending ten weeks at the top of the country charts. It featured a guitar solo in the lower register played through a malfunctioning amplifier and is recognized as the first popular song with electric guitar distortion effects, the precursor of the "fuzz" tone now a standard feature for nearly all rock guitarists.

"Devil Woman" (1962) reached number one on the country charts and remained there for eight weeks, followed by "Ruby Ann," another number one country hit. "Begging to You" hit the top of the chart in 1963. Meanwhile, Robbins began a second career—described by him as a "hobby"—in stock car racing. In 1964, he played the starring role in the Hollywood movie Ballad of a Gunfighter, based on his western ballads. Although big records came less frequently in the late 1960s and 1970s, he continued to score hits, such as Gordon Lightfoot's composition "Ribbon of Darkness" and Robbins' own "My Woman My Woman My Wife." His popularity as a stage performer did not wane.

Robbins died of complications following cardiac surgery on December 8, 1982. Marty and Marizona lived in Brentwood in Williamson County, outside Nashville. They are interred in Woodlawn Memorial Park in Nashville.

Robbins was also inducted into the Nashville Songwriters Hall of Fame in 1975. For his contribution to the recording industry, Robbins has a star on the Hollywood Walk of Fame at 6666 Hollywood Blvd.

In addition to his recordings and performances, Robbins was an avid race car driver, competing in the Daytona 500 and numerous other [NASCAR]] races. In 1967, Robbins played himself in the car racing film Hell on Wheels.