Manticore illustration from The History of Four-footed Beasts (1607), by Edward Topsell.

The manticore is a legendary creature of Central Asia, a kind of chimera, that is sometimes said to be related to the Sphinx. It was often feared as being violent and feral, but it was not until the manticore was incorporated into European mythology during the Middle Ages that it came to be regarded as an omen of evil.

Like many such beasts, there is dispute about the existence of the manticore. It has been suggested that tales of tigers were embellished to create the even more fearsome manticore. Others maintained that such a species exists even today. At least, it exists in the world of fantasy, providing a worthy and intriguing opponent for heroes.

Originally, the term manticore came into the English language from the Latin mantichora, which was borrowed from the Greek mantikhoras. The Greek version of the word is actually an erroneous pronunciation of martikhoras from the original early Middle Persian martyaxwar, which translates as "man-eater" (martya being "man" and xwar- "to eat").[1] 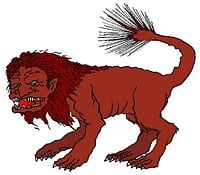 Although versions occasionally differ, the generalities of the manticore's description seem to be that it has the head of a man often with horns, gray or blue eyes, three rows of iron shark-like teeth, and a loud, trumpet/pipe-like roar. The body is usually of a (sometimes red-furred) lion, and the tail of a dragon or scorpion, which some believe can shoot out venomous spines or hairs to incapacitate prey.[2]

The manticore is said to be able to shoot its spines either in front or behind, curving its tail over its body to shoot forwards, or straightening it tail to shoot them backwards. The only creature reputed to survive the poisonous stings is the elephant. Thus, hunters rode elephants when hunting the manticore.[3]

The manticore is said to be able to leap in high and far bounds; it is an excellent hunter, and is said to have a special appetite for human flesh. Occasionally, a manticore will possess wings of some description.

The manticore originated in Ancient Persian mythology and was brought to the Western mythology by Ctesias, a Greek physician at the Persian court, in the fifth century B.C.E.[4] The Romanized Greek Pausanias, in his Description of Greece, recalled strange animals he had seen at Rome and commented,

The beast described by Ctesias in his Indian history, which he says is called martichoras by the Indians and "man-eater" by the Greeks, I am inclined to think is the lion. But that it has three rows of teeth along each jaw and spikes at the tip of its tail with which it defends itself at close quarters, while it hurls them like an archer's arrows at more distant enemies; all this is, I think, a false story that the Indians pass on from one to another owing to their excessive dread of the beast. (Description, xxi, 5) 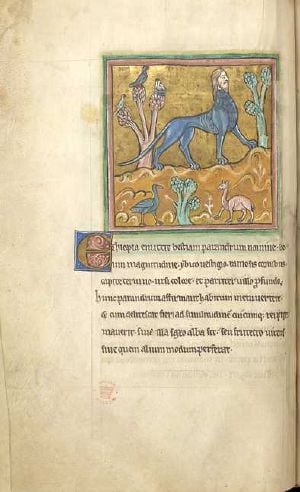 Pliny the Elder did not share Pausanias' skepticism. He followed Aristotle's natural history by including the martichoras—mis-transcribed as manticorus and thus passing into European languages—among his descriptions of animals in Naturalis Historia, c. 77 C.E. Pliny's book was widely enjoyed and uncritically believed through the European Middle Ages, during which the manticore was often illustrated in bestiaries.

An Eastern version of the manticore is said by some locals to inhabit the jungles of Southeast Asia, stalking villagers at night. While it is speculative if the locals actually believe in the mythical creature's existence, or are merely carrying on a tradition is not clear. Outside of fantasy sub-culture, Southeast Asia is the only area in the world where accounts of manticores continue to be discussed.

Some have considered the manticore to be no more than a tiger, either a Bengal tiger or a Caspian tiger, its fur appearing red in the sun. While those who saw such beasts, who have been known to attack and even eat humans (and were used in Roman arenas to fight gladiators), would naturally describe them as fearsome, for those who had never seen them all their characteristics would sound fantastic. Thus the three rows of teeth and the spines on the tail could well have become embellishments on tales of the tiger.

The manticore made a late appearance in heraldry, during the sixteenth century, influencing some Mannerist representations, such as Bronzino's allegory The Exposure of Luxury, (National Gallery, London)[5]—but more often in the decorative schemes called "grotteschi"—of the sin of Fraud, conceived as a monstrous chimera with a beautiful woman's face. In this way it passed by means of Cesare Ripa's Iconologia into the seventeenth and eighteenth century French conception of a sphinx. It never was as popular as other mythological creatures used in heraldry, most likely because it always maintained an element of malevolance.

During the Middle Ages, the manticore was sometimes seen as a symbol of the prophet Jeremiah, since both were underground dwellers. However, positive connotations did not stick to the manticore. Its ferocious manner and terrifying appearance quickly made it a symbol of evil, and the manticore in Europe came to be known as an omen of evil tidings. To see a manticore was to see a forthcoming calamity. Thus it came to imply bad luck, such as the proverbial black cat in modern society.

While not quite as popular as some other mythical creatures, the manticore has none the less been kept alive in the area fantasy sub-culture of modern society. The manticore has made appearances in several fantasy novels, including J.K. Rowling's Harry Potter series. A manticore also featured as one of the unique creatures captured by the witch for her menagerie in Peter S. Beagle's The Last Unicorn, which was made into a popular animated movie. The manticore also features in Robertson Davies' second novel of The Deptford Trilogy, The Manticore (1972).

However, manticores' most prominent appearances are in role-playing and video games. Dungeons and Dragons, Magic: The Gathering, and the Warhammer Fantasy Battles all incorporate manticores.

Retrieved from https://www.newworldencyclopedia.org/p/index.php?title=Manticore&oldid=941861
Categories:
Hidden category:
This page was last edited on 10 May 2009, at 18:37.
Content is available under Creative Commons Attribution/Share-Alike License; additional terms may apply. See Terms of Use for details.