Mathematical logic is a mathematical representation of formal rules of human thought, which philosophers have been attempting to develop since Aristotle. Philosophical arguments are often incomprehensible due to obscure or ambiguous expressions. Logical connectives are basic units which constitute the logical structure of an argument. By applying these conceptual tools, arguments can become clearer, communicable, and comprehensible.

The words and and so are both grammatical conjunctions joining the sentences (A) and (B) to form the compound sentences (C) and (D). The and in (C) is a logical connective, since the truth of (C) is completely determined by (A) and (B): it would make no sense to affirm (A) and (B) but deny (C). However so in (D) is NOT a logical connective, since it would be quite reasonable to affirm (A) and (B) but deny (D): Perhaps, after all, Jill went up the hill fetch a pail of water, not because Jack had gone up the Hill at all. Thus, and is a logical connective but so is not. In the realm of pure logic, (C) is a compound statement but (D) is not. (D) cannot be broken into parts using only the logic of statements, the realm of cause and effect being proper to science rather than logic.

Various English words and word pairs express truth-functions, and some of them are synonymous. Examples (with the name of the relationship in parentheses) are:

For example, the statements it is raining and I am indoors can be reformed using various different connectives to form sentences that relate the two in ways which augment their meaning:

If one writes "P" for It is raining and "Q" for I am indoors, and uses the usual symbols for logical connectives, then the above examples could be represented in symbols, respectively:

The following table shows important equivalences like the De Morgan's laws (lines 1000 and 1110) or the law of Contraposition (line 1101). 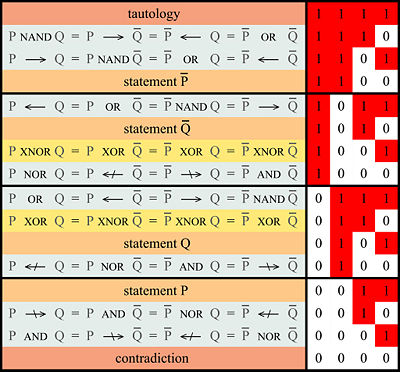 Table of all logical connectives

The following are the functionally complete sets (of cardinality not exceeding 2) of operators whose arities do not exceed 2:

is left-distributive over + if, given any elements x, y, and z of S,

is right-distributive over + if, given any elements x, y, and z of S:

A set of operators is functionally complete if and only if for each of the following five properties it contains at least one member lacking it:

. Therefore, the number of such operators is

, which is how the above numbers were derived.

However, some of the operators of a particular arity are actually degenerate forms that perform a lower-arity operation on some of the inputs and ignores the rest of the inputs. Out of the 256 ternary boolean operators cited above,

of them are such degenerate forms of binary or lower-arity operators, using the inclusion-exclusion principle. The ternary operator

is one such operator which is actually a unary operator applied to one input, and ignoring the other two inputs.

"Not" is a unary operator, it takes a single term (¬P). The rest are binary operators, taking two terms to make a compound statement (P

The set of logical operators

may be partitioned into disjoint subsets as follows:

is the set of operator symbols of arity

In the more familiar propositional calculi,

is typically partitioned as follows:

As a way of reducing the number of necessary parentheses, one may introduce precedence rules: ¬ has higher precedence than ∧, ∧ higher than ∨, and ∧ higher than →. So for example, P ∨ Q ∧ ¬R → S is short for (P ∨ (Q ∧ (¬R))) → S.

Here is a table that shows a commonly used precedence of logical operators.

The order of precedence determines which connective is the "main connective" when interpreting a non-atomic formula.

Logical operators are implemented as logic gates in digital circuits. Practically all digital circuits (the major exception is DRAM) are built up from NAND, NOR, NOT, and transmission gates. NAND and NOR gates with 3 or more inputs rather than the usual 2 inputs are fairly common, although they are logically equivalent to a cascade of 2-input gates. All other operators are implemented by breaking them down into a logically equivalent combination of 2 or more of the above logic gates.

The "logical equivalence" of "NAND alone," "NOR alone," and "NOT and AND" is similar to Turing equivalence.

That fact that all logical connectives can be expressed with NOR alone is demonstrated by the Apollo guidance computer.

In logic, a set of symbols is commonly used to express logical representation. As logicians are familiar with these symbols, they are not explained each time they are used. So, for students of logic, the following table lists many common symbols together with their name, pronunciation and related field of mathematics. Additionally, the third column contains an informal definition, and the fourth column gives a short example.

Be aware that, outside of logic, different symbols have the same meaning, and the same symbol has, depending on the context, different meanings.