Lidice is a small village that lies in the rolling hills of Bohemia, less than a half-hour by car west of Prague, the capital of the Czech Republic. There is little to distinguish it from other small Bohemian villages except for its complete lack of timeworn, traditional structures and for its abundance of modern memorial statuary.

During World War II, when Czechoslovakia was occupied by the forces of Nazi Germany, Lidice paid the ultimate price for incurring the wrath of Adolf Hitler. The village, along with another smaller Czech hamlet, was totally eradicated and its populace destroyed in 1942 in retribution for the killing of one of Hitler's favored lieutenants.

A new Lidice (pronounced LIH-dut-see) rebuilt after the war, stands in defiance of and as testimony to the uncontrolled hatred of the Nazi era. Though hardly the first or worst such incident in human history, the village's demise remains a bleak milestone in the record of twentieth-century cruelty and ruthlessness. 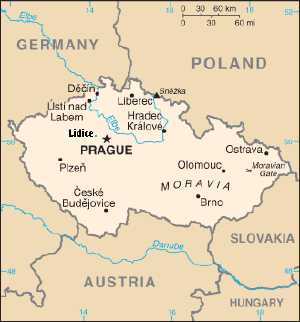 Lidice is a small village west of Prague

Much of Eastern Europe, including Prague and Bohemia, was Christianized in the thirteenth century. (Prague itself underwent an important wave of Germanic settlement around 1235.) The first mention in writing of the village of Lidice was in 1318, by which time all of Bohemia was a part of the Holy Roman Empire.

The scourge of European religious wars (mainly the Hussite War and the Thirty Years War) caused the village to be destroyed and rebuilt at least twice by the seventeenth century. When the Industrial Revolution reached Bohemia in the twentieth century, many of Lidice's people worked in mines and factories in the neighboring small cities of Kladno and Slaný. At the end of World War I, Czechoslovakia was established as a country, the union of Bohemia with Moravia and Slovakia, all three being former provinces of the collapsed Austro-Hungarian Empire.

In about two decades, the world was at war again and Czechoslovakia was at the center of the conflict. Though Lidice is located solidly in the middle of Bohemia and not in the part that Hitler demanded in 1938 to be carved away and added to Germany, by the following year German forces seized all the rest of the country as well, including the town. This act of defiance and treaty-breaking with Britain and France is one of the several principal causes of World War II. 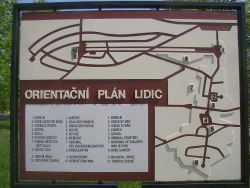 Lidice, past and present

By 1942, Lidice consisted of one road, a baroque Catholic church on a small plaza, a school, and a scattering of family homes headed by men who largely worked as miners and ironworkers, all on a small rise above the surrounding countryside.

Hitler had placed a trusted official, Reinhard Heydrich, as deputy administrator for Bohemia and Moravia. Heydrich had already made a name for himself as the second in command of the Nazi SS after Heinrich Himmler. Early in 1942 he headed the Wannsee Conference near Berlin, which devised the infamous "final solution" to the "Jewish question."

On May 27, Heydrich was being driven into the capital from his residence north of Prague when his motorcade was attacked on the city's outskirts by a small team of Czech and Slovak assassins dispatched months earlier by the nationalist resistance based in London. Eight days later Heydrich died of his wounds. Hitler, enraged, ordered his forces in Czechoslovakia to "wade through blood" to find Heydrich's killers. The Germans began a massive retaliation campaign against the civilian Czech populace.

Did you know?
The village of Lidice was destroyed and its people killed in retribution for the killing of one of Hitler's leaders

The best known of these retaliations occurred on June 10. The Nazis chose the village of Lidice for its residents' known hostility to the occupation, from suspicion that it was harboring local resistance partisans, and for its supposed connection to one of Heydrich's killers. German security police surrounded the community the night before, rousted all the residents, forced them into locked buildings, and blocked all avenues of escape from the town. In the early morning all women and children (under 16 years of age), a total of nearly 300, were trucked away to concentration camps, only about half of whom are known to have survived. Later the men were brought out in small groups throughout the day, lined up against walls, and shot to death until bodies were strewn and heaped across the lawns between buildings. Later they were buried in a mass grave.

The village itself was burned to the ground and further leveled with explosives, then bulldozed, including the cemetery and its tombstones. All valuables were looted from the homes, and even domesticated animals were destroyed. Grain was sown over the rearranged earth to bury any sign of the site's past. Later, the name of the village was ordered removed from all German-made maps.

The troops that assaulted Lidice made a film (without audio) to record their operation that day. It survives as a lasting testament to the fate of Lidice and was among the documents entered in the postwar Nuremberg Trials.

A few residents were away from the village on June 10, including 19 men who worked as miners in a nearby town. They, along with seven absent women, were soon rounded up and sent to Prague, where all were also executed. All together, about 340 people died in the Nazi reprisal in Lidice.

Further Consequences of the Assassination

An even smaller Czech village named Ležáky, in the opposite direction from Prague as Lidice, was also completely razed two weeks later. In this small community of quarry and mill workers where a few residents had actually helped in the efforts of Heydrich's killers, all men and women were shot, as well as many children—a total of 54 residents.

The overall death toll resulting from the effort to avenge the death of Heydrich is estimated at 1,300, most of who were arrested in Czechoslovakia but some also in Germany. This count includes relatives of the partisans, their supporters, Jews already sequestered, Czech elites suspected of disloyalty, and random victims like those from Lidice.

Criticism is sometimes directed at the British-based Czechoslovakian government in exile and nationalist resistance for choosing to target Heydrich, knowing that the possibility of massive and merciless retaliation against innocents, if the assassination attempt was successful, had to be high.

Of additional moral concern was the discovery in government archives in 2006 that wartime Prime Minister Winston Churchill, in the first week after the incident in Lidice, pushed strongly for a revenge bombing by the Royal Air Force of three random German villages to show the Nazis the price to be paid for their barbarity. His cabinet eventually talked him out of the retaliatory measure.

Memorialization of Lidice and Its Name

Nazi propaganda had openly announced the events in Lidice, unlike other massacres in occupied Europe that were kept secret. The information was quickly picked up by Allied media and used in their propaganda.

In the very year of the atrocity, American poet Edna St. Vincent Millay was commissioned to write The Murder of Lidice, the reading of which was beamed by shortwave radio to Europe as a contribution to the war effort. A movie about Lidice was also filmed in Britain soon after the event, using a Welsh coal mining village to stand in for its Czech counterpart.

Although the Nazis succeeded initially in wiping Lidice off the map, the name soon appeared again in several places, particularly in locations in the Americas, not only to memorialize the town and the crime against it but also to make its name endure in spite of Hitler's attempt to obliterate it.

Soon after the razing of the village, towns in Brazil took the names of Lídice (near Rio de Janeiro) and Nova Lídice (in the rural northeast). An area of Caracas donned the Lídice name in Venezuela. In Central America, a town in the countryside outside Panama City preserves the Czech village's name. San Jerónimo-Lídice became the new name for a barrio on the outskirts of Mexico City. A Cuban district near Havana assumed the name as well. And in the United States, a neighborhood near Joliet, Illinois (southwest of Chicago) was also renamed in Lidice's honor.

Throughout the world, monuments have been built to the victims of Lidice, and schools, parks, plazas, and streets (including a main thoroughfare in Bulgaria's capital of Sofia) have been named or renamed for the village. In addition, Lidice was adopted as a woman's name in several countries, particularly in Latin America. Finally, the artistic talent of the winner of the Miss America contest of 1956 was the recitation of Millay's poem.

Although the village of Lidice was destroyed completely, it was rebuilt after the war, beginning in 1947, by the national government. The new Lidice, with its center located a short distance from the original site, debuted in 1949. The former site was kept as a place to preserve the common grave of the men who died in the massacre, for a village history museum, and a memorial to the dead that has received contributions from many countries.

The village remains a quiet spot, pleasant and green, with meadows and trees. There are some shops but it is clearly not a highly developed town. It has begun to attract couples from all over the Czech Republic for their wedding services as a unique place to celebrate life. The only disturbance to the normal serenity may be the increasing number of planes flying in and out of Prague's airport, situated halfway between Lidice and the capital, as Prague continues to draw a growing number of international visitors.

As for Ležáky, the other victimized Czech village of June 1942, only a memorial stands now at its site. The community was never rebuilt.

Both villages, but especially Lidice, were often cited during World War II as the symbols and reasons that the conflict was being fought. Lidice still remains as an important milestone of the war. Though greater horrors would be discovered later, it was the first major Nazi atrocity to come into full view and galvanize nations in disgust for the perpetrators and sympathy for the victims.