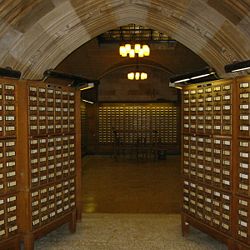 A library catalog (or library catalogue) is a register of all bibliographic items found in a particular library or group of libraries, such as those belonging to a university system spread out over several geographic locations. A bibliographic item can be any information entity (e.g., books, computer files, graphics, realia, cartographic materials, etc.), that is considered library material (e.g., a single novel in an anthology), or a group of library materials (e.g., a trilogy), or linked from the catalog (e.g., a webpage) as far as it is relevant to the catalog and to the users of the library.

The card catalog was a familiar sight to library users for generations, but it has been effectively replaced by the Online Public Access Catalog (OPAC). Some still incorrectly refer to the online catalog as a "card catalog." Some libraries with OPAC access still have card catalogs on site, but these are now strictly a secondary resource and are seldom updated. Many of the libraries that have retained their physical card catalog post a sign advising the last year that the card catalog was updated. Some libraries have eliminated their card catalog in favor of the OPAC for the purpose of saving space for other use, such as additional shelving.

Goal of a library catalog 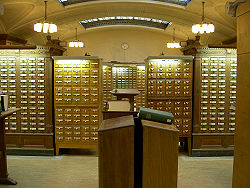 Another view of the SML card catalog.

Charles Ammi Cutter made the first explicit statement regarding the objectives of a bibliographic system in his Rules for a Printed Dictionary Catalog in 1876. According to Cutter, those objectives were

1. Identifying objective: to enable a person to find a book of which either

2. Collocating objective: to show what the library has

3. Evaluating objective: to assist in the choice of a book

These objectives can still be recognized in more modern definitions formulated throughout the twentieth century.[1] In 1960/61 Cutter's objectives were revised by Lubetzky and Lubetzky and the Conference on Cataloging Principles (CCP) in Paris. The latest attempt to describe a library catalog's goals and functions was made in 1998 with Functional Requirements for Bibliographic Records (FRBR) which defines four user tasks: find, identify, select, and obtain.

Traditionally, there are the following types of catalog:

Library catalogs originated as manuscript lists, arranged by format (folio, quarto, etc.) or in rough alphabetical arrangement by author. Printed catalogs, sometimes called dictionary catalogs enabled scholars to access the contents of a library. These would sometimes be interleaved with blank leaves on which additions could be recorded, or bound as guardbooks in which slips of paper were bound in for new entries. Slips could also be kept loose in cardboard or tin boxes, stored on shelves. The first card catalogs appeared in the nineteenth century, enabling much more flexibility, and towards the end of the twentieth century the OPAC was developed (see below).

More about the early history of library catalogs has been collected in 1956 by Strout.[3] 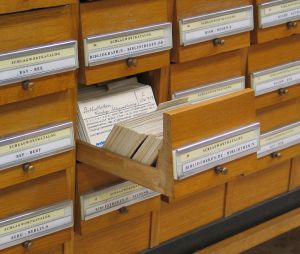 A card catalog in the University Library of Graz

Cataloging (or cataloguing) rules have been defined to allow for consistent cataloging of various library materials across several persons of a cataloging team and across time. Users can use them to clarify how to find an entry and how to interpret the data in an entry. Cataloging rules prescribe:

The larger a collection, the more elaborate cataloging rules are needed. Users cannot and do not want to examine hundreds of catalog entries or even dozens of library items to find the one item they need.

Currently, most cataloging rules are similar to, or even based on, the International Standard Bibliographic Description (ISBD), a set of rules produced by the International Federation of Library Associations (IFLA) to describe a wide range of library materials. These rules organize the bibliographic description of an item in the following areas:

The most commonly used set of cataloging rules in the English speaking world are the Anglo-American Cataloging Rules, 2nd Edition, or AACR2 for short. In the German-speaking world there exists the Regeln für alphabetische Katalogisierung, abbreviated RAK. AACR2 has been translated into many languages, however, for use around the world. AACR2 provides rules for descriptive cataloging only and does not touch upon subject cataloging.

Library items that are written in a foreign script are, in some cases, transliterated to the script of the catalog.

In a title catalog, one can distinguish two sort orders:

The grammatic sort order has the advantage that often, the most important word of the title is also a good keyword (question three), and it is the word most users remember first when their memory is incomplete. However, it has the disadvantage that many elaborate grammatic rules are needed, so that only expert users may be able to search the catalog without help from a librarian.

In some catalogs, person's names are standardized, i. e., the name of the person is always (catalogued and) sorted in a standard form, even if it appears differently in the library material. This standardization is achieved by a process called authority control. An advantage of the authority control is that it is easier to answer question two (which works of some author does the library have?). On the other hand, it may be more difficult to answer question one (does the library have some specific material?) if the material spells the author in a peculiar variant. For the cataloguer, it may incur (too) much work to check whether Smith, J. is Smith, John or Smith, Jack.


For some works, even the title can be standardized. The technical term for this is uniform title. For example, translations and reeditions are sometimes sorted under their original title. In many catalogs, parts of the Bible are sorted under the standard name of the book(s) they contain. The plays of William Shakespeare are another frequently cited example of the role played by a uniform title in the library catalog.

Many complications about alphabetic sorting of entries arise. Some examples:

For a fuller discussion, see collation.

In a subject catalog, one has to decide on which classification system to use. The cataloger will select appropriate subject headings for the bibliographic item and a unique classification number (sometimes known as a "call number") which is used not only for identification but also for the purposes of shelving, placing items with similar subjects near one another.

Online cataloging has greatly enhanced the usability of catalogs, thanks to the rise of MAchine Readable Cataloging (MARC standards) in the 1960s. Rules governing the creation of catalog MARC records include not only formal cataloging rules like AACR2 but also special rules specific to MARC, available from the Library of Congress and also OCLC. MARC was originally used to automate the creation of physical catalog cards; Now the MARC computer files are accessed directly in the search process. OPACs have enhanced usability over traditional card formats because:

Searching with an OPAC

Many libraries have their catalog accessible via Internet; some of them can be queried using a simple browser, other using a special version of browser (with Javascript and CSS features), some others using Z39.50 clients.

If you are looking for a book or another item, you can access OPAC from your nearest library and search for it there. If you cannot find a particular book in the catalog, it may be obtained through an interlibrary loan, also known to librarians as I.L.L. Ask the nearest Reference librarian for assistance.

Another option is to use a union catalog, in which many libraries have combined their entire holdings into one database. The largest union catalog is OCLC's WorldCat.