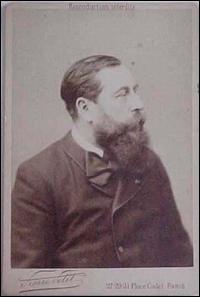 Delibes was born in 1836, the son of a mailman and a musical mother, but also the grandson of an opera singer. He was raised mainly by his mother and uncle following his father's early death. In 1871, at the age of 35, the composer married Léontine Estelle Denain. Delibes died 20 years later in 1891, and was buried in the Cimetière de Montmartre, Paris.

Leo Delibes combined his music education in piano, voice, chorus and composition to excel in the dramatic arts of light opera and the ballet. The opera "Deux sous de charbon" (Two pennies worth of coal), the cantata "Alger" commissioned for Napoleon III, and the ballets "La Source," "Coppelia," and "Sylvia" were his most well-known works which brought forth his talent in creating a dramatic work which combined music, orchestration, vocal pieces, choreography, theatrical backgrounds, and dancing. Delibes' extraordinary presentation of the art of ballet appeared to be positioned in his music, not so much from the choreography or the dancing. 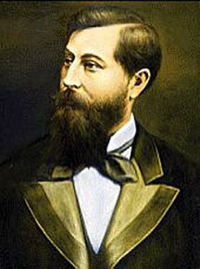 Another portrait of Delibes.

Starting in 1847, Delibes studied musical composition|composition at the Paris Conservatoire as a student of Adolphe Adam. A year later, he also began taking voice lessons, though he would end up a much better organ player than singer. He held positions as a rehearsal accompanist and chorus master at the Théâtre-Lyrique, second chorus master at the Paris Opéra, (1864), and as organist at Saint-Pierre-de-Chaillot between 1865 and 1871. His first of many operettas was Deux sous le charbon, written in 1856 for the Folies-Nouvelles. Delibes achieved true fame in 1870 with the success of his ballet Coppélia; its title referred to a doll, depicted in the work, which comes to life. Other ballets include Sylvia (1876), and La Source (1866), his first, which he wrote with Léon Minkus.

Delibes also composed various operas, the last of which, the lush orientalizing Lakmé (1883), contains, among many dazzling numbers, the famous coloratura showpiece known as the Légende du Paria or Bell Song ("Où va la jeune Indoue?") and The Flower Duet, a barcarolle that British Airways commercials made familiar to non-opera-goers in the 1990s. At the time, his operas impressed Tchaikovsky enough for the composer to rate Delibes more highly than Brahms—which seems faint praise when one considers that the Russian composer considered Brahms "a giftless bastard."

In 1867 Delibes composed the Divertissement Le Jardin Animé for a revival of the Joseph Mazilier/Adolphe Adam ballet Le Corsaire; wrote a Mass, a cantata on the theme of Algiers; and composed operettas and occasional music for the theater, such as dances and antique airs for Victor Hugo's Le roi s'amuse, the play that Verdi turned into Rigoletto (opera)|Rigoletto. Some musicologists believe that the ballet in Gounod's Faust was actually composed by Delibes.

Delibes' work is known to have been a great influence on composers such as Tchaikovsky, Saint-Saëns and Debussy. His ballet Sylvia was of special interest to Tchaikovsky.