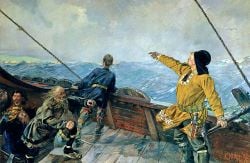 Leif Ericson (Old Norse: Leifr Eiríksson) (c. 970 – c. 1020 C.E.) was a Norse explorer thought to be the first European to have landed in North America, presumably in Newfoundland, Canada.

Born around 970 C.E. in Iceland, Ericson was the son of Erik the Red, who started the first European settlement of Greenland in 985 C.E. Leif sailed to Greenland with his father and lived there until around 1000 C.E., when he returned to his homeland of Norway. There, Ericson reportedly became a Christian, and King Olaf I of Norway asked him to return to Greenland and bring the Vikings there to Christianity. According to one legend, when Ericson was sailing back to Greenland, he was blown off course and instead ended up in North America. In a second version, Leif sailed intentionally west after hearing of richly forested lands there from an earlier voyager, Bjarni Herjólfsson, and was thus not truly the first European to discover the area.

Ericson established a settlement in a place he called Vinland, which was probably the part of Canada now referred to as Newfoundland. The community lasted less than two years due to hostility between the settlers and native peoples, as well as internal struggles.

While Europe remained almost totally in the dark about Erickson's discovery, Norse sagas recorded his exploits. In the 1960s, archaeological findings confirmed the existence of a Norse settlement in Newfoundland dating back to Ericson's time. Thus, it is now considered very probable that Leif Ericson reached the New World almost 500 years before Christopher Columbus.

Ericson's father, Erik the red, was a well-known Norwegian explorer and outlaw who founded two Norse colonies in Greenland, known as the Western Settlement and the Eastern Settlement. Leif’s mother was named Thjodhild. He reportedly had two brothers, Thorvald and Thorstein, and one sister, Freydís.

Leif married a woman named Thorgunna, and they had one son, Thorgills Leifsson. During a stay in Norway, Leif reportedly converted to Christianity, like many Norse of that time. He also entered the service King Olaf Tryggvason, who may have enlisted him to bring Christianity to the settlers in his father's colonies in Greenland. According to one legend, it was while Leif was returning to Greenland that he was blown off course and discovered the New World.

Journey to the New World

The main sources of information about the Viking voyages to Vinland are two Icelandic legends, the Saga of Eric the Red and the Saga of the Greenlanders. These stories were written down approximately 250 years after the settlement of Greenland and are open to considerable breadth of interpretation.

The Saga of the Greenlanders indicates that the initial discovery of what later became known as Vinland predated Leif Ericson's voyage by 14 years. In this version a merchant by the name of Bjarni Herjólfsson set sail from Iceland to Greenland to visit his father there. His ship was blown off course by a storm and thus he accidentally discovered the east coast of North America in 985 or 986. It was late in the summer, and he did not want to stay over to winter in this new land, which he noted was covered with forests, so he did not land and managed to reach Greenland before winter fell.

Herjólfsson later sold his ships to Ericson, who sailed west intentionally and was not blown off course trying to reach Greenland after meeting King Olaf, as in the Saga of Eric the Red. With wood being in very short supply in Greenland, the settlers there were eager to explore the riches of this new land. Ericson explored this coast and eventually established a short-lived colony in what he called Vinland. The Viking settlers found the area pleasant. There were plenty of large salmon in a river there, and the climate was mild, with little frost in the winter and green grass year-round.

The first area discovered by Leif, according to one story, was Helluland ("flatstone land"), possibly Baffin Island. Markland ("wood land")—which is now Labrador—was apparently discovered next. There is some evidence that the treeline in northern Labrador has been diminished or eroded since circa 1000. Lastly emerged Vinland (commonly translated as "wine land," but also interpreted as "pasture land" by others). Vinland may now be what is called L'Anse aux Meadows, where archaeological discoveries indicate a probable Norse settlement from around Ericson's time. 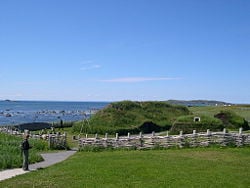 Recreation of the Viking settlement at L'Anse aux Meadows.

The expedition included both families and livestock and its aim was to begin new settlements. Straumfjörðr was the name of Vinland's northern settlement and Hóp was the name for the southern settlement. When Ericson and the Vikings settled, they did not have good relationships with the aboriginal people. They raided nearby villages and killed whoever failed to escape into the woods. Thorvald Eiríksson, Leif's brother, was killed during his second summer there. Despite hostilities, furs, cloth, and other goods were traded between the Vikings and some of the native peoples. When the fighting finally stopped, the settlers built houses out of sod with clay floors, since the sod provided good insulation and stopped rainwater going into the home. They caught fish, hunted game animals, picked berries, and had brought meat, cattle, and poultry from Iceland.

According to the stories, conflict with natives was the major factor that forced the settlement to be abandoned. These skrælingar may have been Beothuks or Dorset people. However, another cause of Vinland's demise may have been disagreements among the Viking men about the few women that followed on the trip, which is also indicated in the written sources.

On the return voyage, Ericson rescued an Icelandic castaway named Þórir and his crew—an incident that earned him the nickname "Leif the Lucky." After returning to Greenland, he reportedly brought his mother to the Christian faith, and she in turn established the first church in Greenland. Ericson died about 1020.

In 1008 on a separate journey, Thorfinn Karlsefni reportedly brought 60 people (including five women) to Vinland. He continued the practice of bringing cattle and sheep from Europe and traded furs, skins, and other commodities with the aboriginal people.

The Vikings probably did not perceive the exploration and settlement of Greenland and Vinland as any different from that of founding Greenland and Iceland. It was merely an extension of their homeland, and notions of a different world only surfaced upon meeting the natives, who were noticeably different from the Irish monks, perhaps equally strange, which the Vikings had encountered in Iceland.

Although there are no records of further settlements, new voyages for woodcutting seem to have been discussed even as late as the 1300s. 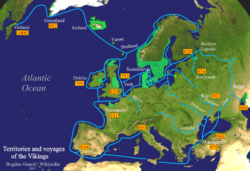 Vinland was first recorded in writing by Adam of Bremen, a geographer and historian, in his book Descriptio insularum Aquilonis, c. 1075, after he visited the Danish king Svend Estridson, who had knowledge of the northern lands and their legends. The Viking sagas were recorded later, but are not considered trustworthy, especially in the light of the strong European emphasis on the story of Christopher Columbus discovering the Americas in 1492.

Until the nineteenth century, the idea of a Viking settlement in North America was considered by historians to be the product of mere folk tales. The first scholarly theory for the idea was put forth in 1837 by Danish literary historian and antiquarian Carl Christian Rafn in his book Antiquitates Americanæ. Rafn had made an exhaustive examination of the sagas, as well as potential settlement sites on the North American coast, and concluded that Vinland was a real place in North America that had been settled by the Norse.

In 1960, archaeological evidence of Norse settlement in North America was found at L'Anse aux Meadows on the island of Newfoundland. Although this proved conclusively the Vikings' pre-Columbian discovery of North America, whether this exact site is the Vinland of the Norse accounts is still a subject of debate. 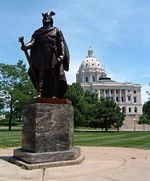 Statue near the Minnesota State Capitol in St. Paul.

A few have speculated that Norsemen may have penetrated as far as Minnesota, either coming down from Hudson Bay or going west through the Great Lakes. Some suggest that the Mandan Indians showed evidence of being culturally influenced by pre-Columbian explorers from Europe. For example, a runestone with carvings of a Scandinavian nature was discovered near Kensington, Minnesota, dating to approximately 1030 C.E. A statue of Leif was erected near the State Capitol in St. Paul, Minnesota on October 9, 1949.

In the nineteenth century, the theory that Ericson and his men visited New England gained popularity. The statue of Ericson on Commonwealth Ave. in Boston, and the Norumbega Tower in Weston Massachusetts were both created as monuments to this supposed Viking presence. However, there is only one piece of hard evidence that suggests Vikings may have visited the area now called the United States: an eleventh-century Norse coin, the Maine Penny, found in Brooklin, Maine along with thousands of other artifacts during an excavation of a former Native American trading center. However, this coin could have come from Newfoundland via trade with native peoples of that area, or may have even been brought to North America centuries later by the English or Portuguese.

The Congress of the United States of America, by joint resolution (Public Law 88-566) approved on September 2, 1964, authorized, and requested the President to proclaim October 9 of each year as "Leif Erikson Day."

Since then, Presidents have accordingly proceeded to call upon "all Americans to observe this day with appropriate ceremonies, activities, and programs to honor our rich Nordic-American heritage."