Kim Ok-gyun, in another time, would likely have been the founder of a new Korean dynasty. The Joseon dynasty, in existence for nearly 500 years, had been declining toward the death stage for over a century. The yangban leadership had become corrupt, oppressing the Korean farmer with unbearable taxes. Peasant revolts, the sure sign of a corrupt dynasty, rocked Korea earlier in the nineteenth century. Yet, the international situation, with the European powers colonizing in Asia while Japan and Russia sought their own colonies, weighed heavily against Progressive Kim and his cohorts. Kim died a martyr, and Korea fell to Japan's colonial intrigue. Yet, Korea survived as a nation, although divided today, in part due to Kim's patriotic example.

Born to Kim Byung-tae and his wife on 1851 in Chungcheongnam-do, Kim's family lived in poverty. At the age of four, they moved to Chun-an. His father opened a Sau-dang, or Korean grammar school, in which Kim studied. At six, Kim Byung-gye, desperate to secure the continuation of his family lineage after his son died, adopted him. For four years, Kim stayed in Seoul. When Kim Byung-gye received the appointment of governor in Kang-reung state in spring of 1861, they moved again. At age 15, Kim Byunggye assumed the position of "Bup-moo-boo Cha-gwan" in the judicial office, his family returning to Seoul. Kim learned and competed with sons of other aristocratic families. He displayed his talents in playing the Kayakem, singing and dancing, poetry, calligraphy, and art. His fame and talents eventually reached the imperial palace, and "Daebi," or the mother of the king, invited him.

At the age of 22, Kim took the national civil service exam in the ninth year of King Gojong (1872), ranking "Jang-won Geub-jae" (level 6), an amazing accomplishment. Usually a candidate required about ten years to achieve that status). To avoid the possible negative impacts of the internal political conflicts that could result on his adopted son, Kim Byunggye retired from his position. After passing the civil service examination, Kim assumed the government posts of Okdangseungji and Hojo-chanpan.[1]

With the Daewongun on the sidelines as a dangerous meddler for the Conservatives, Queen Min and King Gojong sought to steer a progressive course without antagonizing the Conservatives and China. That became increasingly difficult as the sides entrenched to champion their agenda. In that environment, Kim became active player for Progressive goals in the the palace.

Kim supported the progressive approach to the West and Japan as a strategy of enabling Korea to adopt Western ideals, knowledge, and technology. He hoped that Korea would strengthen through the progressive agenda, enabling the resistance of imperialistic powers like Japan and Russia. During his national civil service, Kim found others who agreed with him, including Park Yeonghyo, Hong Yeongshik, and Seo Gwangbeom. They formed the Dongnidang, or "Independence Party."

Among their various contacts, the group met a Buddhist monk at Bong-won Sa, who showed them a European projector that displayed different photographs of the West, such as the streets of London and a Portuguese soldier. He also showed a Japanese book that contained scenes of foreign nations. The activists asked the monk to obtain more Western artifacts for them. The monk spent two months journeying to and from Japan bringing more Western products. They kept the items hidden as the Conservative Party banned them from Korea.

Japan forced Korea to sign the Treaty of Ganghwa in 1875 using the same means Commodore Perry employed to open Japan to American trade, through the threat of naval power. Kim stood against Korea's decision to sign the treaty. Just as Perry's intimidation of Japan triggered convulsions in Japan leading to the Meiji Restoration in 1868, Japan's intimidation of Korea led to convulsions in the Korean court that led to the downfall of the Joseon dynasty.

Kim realized that Japan, once viewed by Koreans as a barbaric nation, had westernized and became a much stronger country. Kim wished to visit Japan to learn how the Japanese had westernized. In November 1881, the royal courted granted Kim permission to visit Japan with the secret commission to learn if Japan planned to invade Korea. After arriving in Tokyo, he met with influential Japanese politicians. He concluded that, for now, Japan would not invade Korea because its military strength was not comparable to Qing China. Kim felt that to ensure survival with China in decline, Korea had to request Japanese help to modernize.

In July of 1882, Korea made another ultimately disadvantageous pact with Japan, in which Korea paid for hosting the Japanese embassy and Japanese soldier to guard the embassy. Kim believed the solution to Korea's weakening position lay in introducing a new, progressive, political party to wipe out the dominant conservative party. In August of the same year, permission to visit Japan as a part of a diplomatic expedition seemed to bring Kim closer to realizing that dream.

After completing diplomatic missions, Kim stayed in Japan purportedly to find out Japan's true intentions towards Korea. His real intention lay in gathering support for plans Gae-Hwa-Pa to overthrown the Korean court and install a Progressive court. During his stay in Japan, he sought assistance from Japanese statesman Inoue Kaoru who promised him 3,000,000 Won (Korean currency) if granted permission from the Korean Emperor Gojong. Unfortunately, conflicts with a German ambassador and a change in Japanese policy on Korea caused Inoue to break his promise. Kim returned home in March 1884 without having attained his goal. 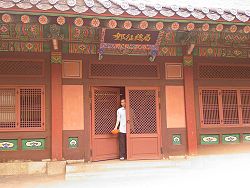 The Gae-Hwa-Pa activists continued to meet at Kim's private house and discuss the ongoing events concerning East Asia and the international politics. Kim offered a feast for the members of the Ming Yaung-Ik political faction, Japanese government officials including Inou, and several of the Gae-Hwa-Pa activists. The discussions turned uncomfortably to the Sino-French War. The Ming Yaung-Ik faction fiercely supported Qing China (which would also ensure the survival of Korea), and Japan fiercely supported France (which would allow Japan to overtake Korea). The meeting broke up as Kim and others tried to stop the heated debate. From that meeting, Kim could clearly predict that Japan would try to take advantage of the Sino-French War by extending its influence on Korea.

Clandestinely, Kim visited the Japanese embassy after the feast. During a discussion with Simamura, Kim questioned Japan's stance for the Gae-Hwa-Pa and complained about the incident with Inou. Simamura explained that the Japanese still supported the movement, and that the internal conflicts and misunderstandings contributed to the ill relationship for Kim with Inoue. He added that the Sino-French War represented a great chance to spur another movement, that the Japanese government would definitely support.

In a meeting of the Gae-Hwa-Pa activists and Japanese supporters, Kim outlined a plan for the revolution. His plan called for the assassinations of key political figures, and creating a major chaos on the day of the reception for the founding of "Woo-Jung-Gook" (우정국), office for international postal service. They would select potential enemies as scapegoats on whom to lay the blame. The Japanese embassy firmly pledged their military support to the plan. On the night of December 4, 1884, near the "Woo-Jung-Gook" reception, the rebells set a fire. While the activists created chaos with explosives and gunshots, the assassins carried out their murders. Over night, the Gae-Hwa-Pa became the ruling party in the Korean government.

The truth behind the Gapsinjeongbyeon incident leaked to the queen along with the Gae-Hwa-Pa plans to remove the Queen or kill her. The queen secretly requested the Chinese to display a show of force in the throne's defense. Korean and Japanese soldiers, fighting against a numerically superior Chinese army, retreated. With the victory of the Chinese army, the Gae-Hwa-Pa activists fell from power, the Sa-De-Dang party assuming control. The rebels fled for their lives toward the city port of Jemulpo (Incheon) under the escort of the Japanese ambassador Takejo, boarding the Japanese ship, Sensei. When the Korean court requested that the Japanese ambassador Takejo hand over the rebels, he agreed. The Japanese captain Sujikas scolded Takejo, prohibiting their release.

Because a Korean name would bring oppression in Japan, the captain gave Kim a new name, Itawa Sujaku (岩田周作). His fellow conspirators left Japan for the United States while Kim Okgyun decided to remain in Japan. He spent ten years in Japan, residing in the cities Ogasamari (小笠原), Hokaido (北海道) and Doko.[2] Kim suffered mistreatment under full view of the Japanese government. During his stay, he earned much respect from the Japanese young adults and gained adherents, such as Wada.

Many attempts to assassinate Kim failed during the ten years. When Li Hongzhang (李鴻章) sent Kim a letter of invitation to meet with him in Shanghai in 1894, Kim hoped to rekindle plans for a Progressive coup in the Korean royal court. Before departing Kim gave his personal diaries to Koyama, one of his close Japanese friends, in case something should happen to him. Kim then boarded the Japanese ship Seike with Wada, and headed to Shanghai. During that journey Hong Jongwu assassinated Kim Okgyun Donghwayanghaeng (東和洋行) on March 28, 1894.[3]

The Chinese protected assassin Hong Jongwu while returning Kim's body to Korea aboard the Chinese naval vessel Wiwoho. The Korean government dismembered his body, placing his head on display at Yanghwajin. The following year, 1895, Japan defeated China in the Sino-Japanese War removing Korea from it's tributary relationship with Qing China. The Japanese influence government pardoned Kim, bestowing him with posthumous honors at Gyujanggak Daejaehak.

Kim Okgyun's played like the lead role in a Greek tragedy, inspired by the gods to a heroic deed that had no chance to succeed. Kim, in any other period of Joseon history, would have served his government with distinction using his intelligence and skill for the sake of the country. Born in the waning years of the Joseon dynasty, Kim Okgyun found himself cast in a tragic role, just like his country, of acting heroically and dying bravely against impossible odds. In another age, Kim and his cohorts would have been the founders of a new dynasty. In the last nineteenth century, Kim and his fellow Progressives only hastened Korean's collapse into scheming Japan's hands.

Contemporary Koreans, North and South, consider Kim Okgyun a patriot. He attempted to seize control from what he saw as a dangerously Conservative Queen Min and vacillating King Gojong. History is revealing Queen Min as Progressive and King Gojong as a tragic figure like Kim. Ironically, by attempting to overthrow Queen Min and King Gojong, Kim strengthened the Conservatives hand, emboldened China leading to the First Sino-Japanese War of 1894. Kim's assassination on the way to Shanghai marked one of the key steps leading to that war. In another tragic twist, Queen Min suffered assassination at Japanese hands one year later. Korean history lauds Kim Okgyun as a patriot. Surely in his intentions, he lived and died as a patriot.

Retrieved from https://www.newworldencyclopedia.org/p/index.php?title=Kim_Okgyun&oldid=982477
Categories:
Hidden category:
This page was last edited on 18 June 2014, at 14:50.
Content is available under Creative Commons Attribution/Share-Alike License; additional terms may apply. See Terms of Use for details.