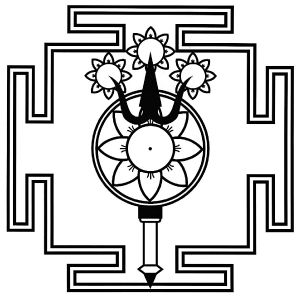 Kaśmir Śaivism (Kashmir Shaivism) is a school of Hindu philosophy that is categorized by various scholars as monistic idealism, theistic monism, transcendental physicalism or concrete monism. These descriptors denote a standpoint that Cit - consciousness - is the one reality. Matter is not separated from consciousness, but rather identical to it. There is no gap between God and the world. The world is not an illusion (as in Advaita Vedanta), rather the perception of duality is the illusion.

As the philosophy of Kaśmir Śaivism is deeply rooted in the Tantras, and the lineage of Kaśmir Śaivism is said to begin with the Hindu God Śiva himself. According to tradition, as the knowledge of the Tantras were lost by the time of Kali Yuga, Shiva took the form of Śrikanthanath at Mount Kailaśa, where he fully initiated Durvasa Ṛṣi, into all forms of the Tantrika knowledge, including abheda (without differentiation), bhedabheda (with and without differentiation), and bheda (differentiated), as described in the Bhairava Tantras, Rudra Tantras, and Śiva Tantras, respectively. Durvasa Ṛṣi intensely meditated in the hope of finding an adequate pupil to initiate, but failed to do so. Instead, he created three "mind-born" sons, and initiated the first son, Tryambaka fully into the monistic abheda philosophy of the Bhairava Tantras; this is known as Kaśmir Śaivism.[1]

Anuttara is the ultimate principle in Kashmir Shaivism, and as such, it is the fundamental reality underneath the whole universe. Among the multiple interpretations of anuttara are: "supreme," "above all" and "unsurpassed reality".[2] In the Sanskrit alphabet anuttara is associated to the first letter - "A" (in devanagari "अ"). As the ultimate principle, anuttara is identified with Shiva, Shakti (as Shakti is identical to Shiva), the supreme consciousness (cit), uncreated light (prakāśa), supreme subject (aham) and atemporal vibration (spanda). The practitioner who realized anuttara is considered to be above the need for gradual practice, in possession of an instantaneous realization and perfect freedom (svātantrya). Anuttara is different from the notion of transcendence in that, even though it is above all, it does not imply a state of separation from the universe.[3]

Aham, the Heart of Shiva

Aham is the concept of supreme reality as heart. It is considered to be a non-dual interior space of Shiva, support for the entire manifestation,[4] supreme mantra,[5] and identical to Shakti.[6]

Kula is a complex notion primarily translated as family or group. On various levels there exist such structures formed of many parts, interconnected and complementary. They are called families on account of having a common unifying bond, which is ultimately the Supreme Lord, Śiva.[7] The practices related to Kaula are very obscure and mystical and the focus is away from much philosophical tinkering and more into immediate experimentation. In essence, Kaula is a form of body alchemy where the lower aspects of one's being are dissolved into the higher ones, as they all are considered to form a unified group (a kula) which relies on Śiva as ultimate support.[8][9]

The first great initiate recorded in history of this spiritual path was Vasugupta (c. 875-925 C.E.).[10] Vasugupta formulated for the first time in writing the principles and main doctrines of this system.

A fundamental work of Shaivism, traditionally attributed to Vasugupta, is the Shiva Sutras.[11] Traditionally, these sutras are considered to have been revealed to Vasugupta by Shiva.[12] According to myth, Vasugupta had a dream in which Shiva told him to go to the Mahādeva mountain in Kashmir. On this mountain, he is said to have found verses inscribed on a rock, the Shiva Sutras, which outline the teachings of Shaiva monism. This text is one of the key sources for Kashmir Shaivism.[13] The work is a collection of aphorisms. The sutras expound a purely non-dual (advaita) metaphysics.[14] These sutras, which are classified as a type of Hindu scripture known as agamas, are also known as the Shiva Upanishad Samgraha (Sanskrit: śivopaniṣad saṅgraha) or Shivarahasyagama Samgraha.[15]

Classification of the written tradition

The first Kashmiri Shaiva texts were written in the early ninth century C.E.[16]

As a monistic tantric system, Trika Shaivism, as it is also known, draws teachings from shrutis, such as the monistic Bhairava Tantras, Shiva Sutras of Vasugupta, and also a unique version of the Bhagavad Gita which has a commentary by Abhinavagupta, known as the Gitartha Samgraha. Teachings are also drawn from the Tantraloka of Abhinavagupta, prominent among a vast body of smritis employed by Kashmir Shaivism.

In general, the whole written tradition of Shaivism can be divided in three fundamental parts: Āgama Śāstra, Spanda Śāstra, and Pratyabhijñā Śāstra.[17]

1. Āgama Śāstra are those writings that are considered as being a direct revelation from Siva. These writings were first communicated orally, from the master to the worthy disciple. They include essential works such as Mālinīvijaya Tantra, Svacchanda Tantra, Vijñānabhairava Tantra, Netra Tantra, Mṛgendra Tantra, Rudrayāmala Tantra, Śivasūtra and others. There are also numerous commentaries to these works, Śivasūtra having most of them.[18]

2. Spanda Śāstra, the main work of which is Spanda Kārikā of Vasugupta, with its many commentaries. Out of them, two are of major importance: Spanda Sandoha (this commentary talks only about the first verses of Spanda Kārikā), and Spanda Nirṇaya (which is a commentary of the complete text).[19]

3. Pratyabhijñā Śāstra are those writings that have mainly a metaphysical content. Due to their extremely high spiritual and intellectual level, this part of the written tradition of Shaivism is the least accessible for the uninitiated. Nevertheless, this corpus of writings refer to the simplest and most direct modality of spiritual realization. Pratyabhijñā means "recognition" and refers to the spontaneous recognition of the divine nature hidden in each human being (atman). The most important works in this category are: Īśvara Pratyabhijñā, the fundamental work of Utpaladeva, and Pratyabhijñā Vimarśinī, a commentary to Īśvara Pratyabhijñā. Īśvara Pratyabhijñā means in fact the direct recognition of the Lord (Īśvara) as identical to one's Heart. Before Utpaladeva, his master Somānanda wrote Śiva Dṛṣṭi (The Vision of Siva), a devotional poem written on multiple levels of meaning.[20]

All the four branches of the Kashmiri Shaivism tradition were put together by the great philosopher Abhinavagupta (approx. 950-1020 C.E.).[21] Among his important works, the most important is the Tantraloka ("The Divine Light of Tantra"), a work in verses which is a majestic synthesis of the whole tradition of monistic Shaivism. Abhinavagupta succeeded in smoothing out all the apparent differences and disparities that existed among the different branches and schools of Kashmir Shaivism of before him. Thus he offers a unitary, coherent and complete vision of this system. Due to the exceptional length (5859 verses)[22] of Tantraloka, Abhinavagupta himself provided a shorter version in prose, called Tantrasara ("The Essence of Tantra").

Another important Kashmiri Shaivite, Jayaratha (1150-1200 C.E.),[23] added his commentary to Tantraloka, a task of great difficulty which was his lifelong pursuit.[24] He provided more context, numerous quotes and clarifications, without which some passages from Tantraloka would be impossible to elucidate today.

The four schools of Kashmir Shaivism

The term 'krama' means 'progression', 'gradation' or 'succession' refers to 'spiritual progression'[25] or 'gradual refinement of the mental processes' (vikalpa)[26], or 'successive unfoldment taking place at the ultimate level', in the Supreme Consciousness (cit).[27]

Even if the Krama school is an integral part of Kashmir Shaivism, it is also an independent system both philosophically and historically.[28] Krama is significant as a synthesis of Tantra and Śākta traditions based on the monistic Śaivism.[29] As a Tantric and Śakti-oriented system,[30] of a mystical flavor,[31] Krama is similar in some regards to Spanda as both center on the activity of Śakti, and also similar with Kula in their Tantric approach. Inside the family of Kashmir Shaivism, the Pratyabhijñā school is most different form Krama.[32]

The most distinctive feature of Krama is its monistic-dualistic (bhedābhedopāya) discipline in the stages precursory to spiritual realization.[33] Even if Kashmir Shaivism is primarily an idealistic monism, there is still a place for dualistic aspects as precursory stages on the spiritual path. So it is said that in practice Krama employs the dualistic-nondualistic methods, yet in the underlying philosophy it remains nondualistic.[34] Krama has a positive epistemic bias,[35] aimed at forming a synthesis of enjoyment (bhoga) and illumination (mokṣa).

Another very important school of Kashmir Shaivism, Kula in Sanskrit, means 'family' or 'totality'. This is a tantric (left hand) school par excellence, and here Śakti plays a paramount role. The Kula teachings comprise the skeleton of Tantrāloka and Tantrasāra.

The Spanda system, introduced by Vasugupta (c. 800 C.E.), is usually described as "vibration/movement of consciousness." Abhinavagupta uses the expression "some sort of movement" to imply the distinction from physical movement; it is rather a vibration or sound inside the Divine, a throb.[36] The essence of this vibration is the ecstatic self-recurrent consciousness.[37]

The central tenet of this system is "everything is Spanda" (vibration), both the objective exterior reality and the subjective world.[38][39] Nothing exists without movement,[40] yet the ultimate movement takes place not in space or time, but inside the Supreme Consciousness (cit). It is a cycle of internalization and externalization of consciousness itself,[41] relating to the most elevated plane in creation (Śiva-Śakti Tattva).[42]

In order to describe the connotations of the Spanda concept, a series of equivalent concepts are enumerated, such as: self recurrent consciousness - vimarśa,[43] unimpeded will of the Supreme Consciousness (cit) - svātantrya, supreme creative energy - visarga, heart of the divine[44] - hṛdaya and ocean of light-consciousness[45] - cidānanda.

The most important texts of the system are Śiva Sutras, Spanda Karika and Vijñāna Bhairava Tantra.[46]

The Pratyabhijña school, which in Sanskrit, literally means "spontaneous recognition" is a unique school, as it does not have any upāyas (means), that is, there is nothing to practice; the only thing to do is recognize who you are. This "means" can actually be called anupāya, Sanskrit for "without means."

Though this school thrived until the beginning of the Kali Yuga, it was eventually lost due to a lack of understanding of the school, until, in the eighth century C.E., the Kashmir Shaivite master, Somananda is said to have revived the system.[47]

Retrieved from https://www.newworldencyclopedia.org/p/index.php?title=Kasmir_Saivism&oldid=877496
Categories:
Hidden category:
This page was last edited on 12 December 2008, at 15:07.
Content is available under Creative Commons Attribution/Share-Alike License; additional terms may apply. See Terms of Use for details.