Joséphine de Beauharnais (nee Marie Josèphe Rose Tascher de la Pagerie) (June 23, 1763 – May 29, 1814) was the first wife of Napoléon Bonaparte, and thus the first Empress of the French. Through her daughter, Hortense, she was the maternal grandmother of Napoleon III. Through her son she was the Great-Grand mother of the latest Swedish and Danish Kings and Queens, as well as the last Greek Queen. The current reigning houses of Belgium, Norway and Luxemburg descend from her. She died in 1814, and she was buried not far from Malmaison, at the St. Pierre and St. Paul church in Rueil, where her daughter, Hortense is interred beside her. Her marriage with Napoleon was unstable, due to her own flirtation with other men and her spending habits. She was married to one of the most powerful, and ambitious men in the world and did not lack ambition herself, having more or less turned herself into a woman of fashion who could move within sophisticated Parisian society at ease, following her early experience when her provincial manners made it difficult for her to gain acceptance. However, she does not appear to have had political ambitions. Close ties between royal families, though, has sometimes, if not always, helped to maintain peace between nations. Josephine is remembered as one of the most important women of the nineteenth century, although it could be claimed that she accomplished relatively little of any real merit.

Marie Josèphine Rose Tascher de la Pagerie was born in Trois-Ilets, Martinique on June 23, 1763, but baptized in Martinique, to a slave-owning family that owned a sugar plantation. She was a daughter of Joseph-Gaspard de Tascher, chevalier, seigneur de la Pagerie, lieutenant of Troupes de Marine, and his wife, the former Rose-Claire des Vergers de Sanois, whose maternal grandfather was English.

The family struggled financially when hurricanes destroyed their estate in 1766. Edmée, Joséphine's paternal aunt had been the mistress of François, vicomte de Beauharnais, a French aristocrat. When Francois' health began to fail, Edmée arranged the advantageous marriage of her niece Catherine-Désirée to François' son, Alexandre, Vicomte de Beauharnais. This marriage would be highly beneficial for the Tascher family, because it would keep the de Beauharnais money in their hands. However, 12-year-old Catherine died on October 16, 1777, before even leaving Martinique for France. In service to their aunt Edmée's goals, Catherine was replaced by her older sister Joséphine.

In October 1779, Joséphine went to Europe with her father. She married Alexandre on December 13, 1779, in Noisy-le-Grand. Although their marriage was not extremely happy, they had two children: a son, Eugène de Beauharnais (1781–1824), and a daughter, Hortense de Beauharnais (1783–1837), who married Napoleon's brother Louis Bonaparte in 1802. In her early days in Paris her provincial lack of sophistication made it difficult for her to move at ease in Parisian society. However, she persevered and turned herself into a fashion conscious, socially skilled woman of taste.

On March 2, 1794, during the Reign of Terror, the Committee of General Security ordered the arrest of her husband, and he was then jailed in the Carmes prison. Considering Joséphine as too close to the counter-revolutionary financial circles, the Committee ordered her arrest on April 19, 1794. A warrant of arrest was issued against her on 2 Floréal, year II (April 21, 1794), and she was imprisoned in the Carmes prison until 10 Thermidor, year II (July 28, 1794). She was freed thanks to the trial of Robespierre. Her husband, accused of having poorly defended Mainz in 1793, and considered an aristocratic "suspect," was sentenced to death. He was guillotined on July 23, 1794, one year after the Siege of Mainz, together with his brother Augustin, on the Place de la Révolution (today's Place de la Concorde) in Paris.

On July 27, 1794 (9 Thermidor), Tallien arranged the liberation of Thérèse Cabarrus, and soon after that, the liberation of Joséphine. In June 1795, thanks to a new law, she was allowed to recover the possessions of Alexandre. 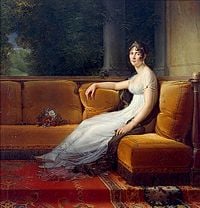 Portrait of the Empress Joséphine, by François Gerard

As a widow, Joséphine de Beauharnais reportedly was the mistress to several leading political figures, including Paul François Jean Nicolas Barras. She met General Napoleon Bonaparte, who was six years younger than her, in 1795, when their romance began. He wrote in a letter to her in December, "I awake full of you. Your image and the memory of last night’s intoxicating pleasures has left no rest to my senses."[1] Joséphine was a renowned spendthrift and Barras may have encouraged the relationship with Napoleon in order to get her off his hands.

In January 1796, Napoleon proposed to her and they married on March 9, 1796. Until meeting Napoleon, she had always been Rose. Instead of calling her this name, which he apparently disliked, he called her 'Joséphine,' which she adopted from then on. Two days after the wedding, Napoleon left to lead the French army in Italy, but sent her many intensely romantic love letters. In February 1797, he wrote: “You to whom nature has given spirit, sweetness, and beauty, you who alone can move and rule my heart, you who knows all too well the absolute empire you exercise over it."[2] Many of his letters are still intact today, while very few of hers have been found. It is not known whether this is due to their having been lost or to their initial scarcity.

Joséphine, less in love than Napoleon, is rumored to have begun an affair with high society playboy, Hippolyte Charles in 1796. There is no way of knowing whether or not this is the case, but regardless of the truth of the matter, the rumors so infuriated and hurt Napoleon, that his love changed entirely. Around this time he took as his own mistress, Pauline Bellisle Foures, the wife of a junior officer who became known as "Napoleon's Cleopatra," the affair having begun during the Egyptian campaign of 1798. The relationship between Joséphine and Napoleon was never the same after her affair. His letters became less loving. No subsequent lovers of Joséphine are recorded, but Napoleon continued to take on mistresses. In 1804 he said "power is my mistress."[3] 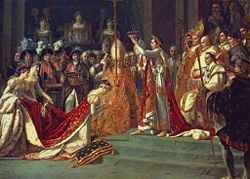 Joséphine kneels before Napoléon during his coronation at Notre Dame.

Shortly before her coronation with Napoleon, there was an incident at the Château de Saint-Cloud that nearly sundered the marriage between the two. Josephine caught Napoleon in the bedroom of her lady-in-waiting, Elisabeth de Vaudey, and Napoleon threatened to divorce her as she had not produced an heir. This was impossible for Joséphine, who was infertile, due either to the stresses of her imprisonment during the Terror triggering menopause, or possibly due to injuries she suffered in a fall from a collapsing balcony in 1799. Eventually, however, through the efforts of Joséphine's daughter Hortense from her previous marriage, the two were reconciled and Napoleon and Joséphine were crowned Emperor and Empress of the French in 1804, in the Notre-Dame cathedral.

When it was clear they were not fertile together, she agreed to be divorced so he could remarry in the hopes of having an heir to succeed him. The divorce took place on January 10, 1810.

On March 11, 1810, Napoleon married Marie Louise of Austria by proxy; the formal ceremony took place at the Louvre on April 1. They had one child, Napoleon II of France, who was born in 1811. 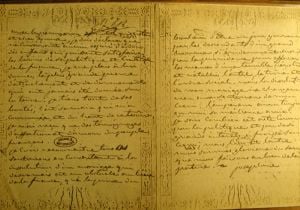 After her divorce, Josephine lived at the Château de Malmaison, near Paris. She remained on good terms with Napoleon, who once said that the only thing to come between them was her debts, which were due to her luxurious shopping expenses.

When she died in 1814, she was buried not far from Malmaison, at the St. Pierre and St. Paul church in Rueil. Her daughter Hortense is interred near her.

Napoleon claimed to a friend, whilst in exile on Saint Helena, that "I truly loved my Josephine, but I did not respect her."[4] Despite his numerous affairs, eventual divorce, and Napoleon's remarrying, the Emperor's last words on the Island of St. Helena were "France, the Army, the Head of the Army, Josephine."[5]

Josephine remains something of an enigma to many people, and one of the most famous women of her generation. She was married to one of the most powerful men in the world yet flirted while he was away from Paris, especially during his Egyptian campaign. However, her place in the world was made secure by her own descendants, who occupy several of the royal thrones of Europe.

Hortense's son became Napoleon III of France. Her granddaughter Josephine, daughter of Eugène, married King Oscar I of Sweden, the son of Napoleon's one-time fiancée, Désirée Clary. Through her, Josephine is a direct ancestor of the present heads of the royal houses of Belgium, Denmark, Luxembourg, Norway and Sweden.