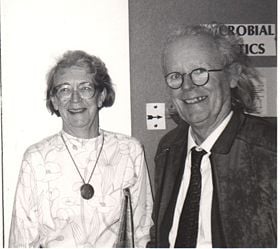 John Maynard Smith F.R.S. (January 6, 1920 – April 19, 2004) was a British theoretical evolutionary biologist and geneticist who utilized the techniques of game theory to help in understanding evolution.

Originally an aeronautical engineer during the Second World War, Maynard Smith took a second degree in genetics under the well-known biologist J. B. S. Haldane, who was one of the founding fathers of the modern evolutionary synthesis (Neo-Darwinism). Maynard Smith theorized on the evolution of sex, signalling theory, and other issues and he was one of the founding members of the University of Sussex.

In his honor, the European Society for Evolutionary Biology has an award for extraordinary young evolutionary biology researchers named The John Maynard Smith Prize.

Maynard Smith underwent a number of transitions in his life, from being a pacifist to trying to enlist in World War II, from joining the Communist Party to leaving the Communist Party, and from being Christian to becoming an atheist. According to his account, learning about evolutionary theory was an impetus in his rejection of belief in God as a young boy of about 14 or 15. Notably, some major evolutionists of his day, including R. A. Fisher and Theodosius Dobzhansky, were ardent believers in God and did not see an either-or between evolution and belief in God.

John Maynard Smith was born in London, the son of a surgeon, but following his father's death in 1928, the family moved to Exmoor, where he became interested in natural history. Quite unhappy with the lack of formal science education at Eton College, Maynard Smith took it upon himself to develop an interest in Darwinian evolutionary theory and mathematics, after having read the work of old Etonian J. B. S. Haldane, whose books were in the school's library despite the bad reputation Haldane had at Eton for his communism and socialism. While at Eton, Maynard Smith became an atheist, with his doubts first rising as a boy of about 14 or 15, which he stated was "as a result of learning about evolution and Darwin," and solidifying when he read Possible Worlds by J. B. S. Haldane.[1]

On leaving school, Maynard Smith joined the Communist Party of Great Britain and started studying engineering at Trinity College Cambridge. When the Second World War broke out in 1939, he defied his party's line and volunteered for service. He noted that he had been a pacifist until about 1938, when he went to Germany and recognized that there was going to be war, and that "pacifisim was not going to stop Hitler." [1] He was rejected, however, because of poor eyesight and was told to finish his engineering degree, which he did in 1941. He later quipped that "under the circumstances, my poor eyesight was a selective advantage—it stopped me getting shot." The year of his graduation, he married Sheila Matthew, and they later had two sons and one daughter (Tony, Carol, and Julian). Between 1942 and 1947, he applied his degree to military aircraft design.

Maynard Smith then took a change of career, entering University College London (UCL) to study fruit fly genetics under Haldane. After graduating, he became a lecturer in Zoology at UCL between 1952 and 1965, where he directed the Drosophila lab and conducted research on population genetics. He published a popular Penguin book, The Theory of Evolution], in 1958 (with subsequent editions in 1966, 1975, 1993).

He became gradually less attracted to communism and became a less active member, finally leaving the Party in 1956 like many other intellectuals, after the Soviet Union brutally suppressed the Hungarian Revolution.[2] He noted that while he "didn't actually leave until the Russians entered Hungary," that he had stopped working for the Party by 1950, with the break having to do with the rise of the anti-Mendelian agronomist Trofim Lysenko.[1] (Haldane had left the party in 1950 after becoming similarly disillusioned by events in the Soviet Union, such as the rise of the Lysenko and the crimes of Stalin.)

In 1962 he was one of the founding members of the University of Sussex and was a Dean between 1965–85. He subsequently became a professor emeritus. Prior to his death the building housing much of Life Sciences at Sussex was renamed the John Maynard Smith Building, in his honour.

Evolution and the Theory of Games

Richard Lewontin, an American evolutionary biologist and geneticist, suggested as early as 1961, in his paper "Evolution and the theory of games," using the techniques of game theory to better understand evolution.[3][4] However, it was Maynard Smith who most extensively developed this approach and in whose name this technique is associated. In 1972, Maynard Smith published an article "Game theory and the evolution of fighting"[5] and in 1974, he published "The theory of games and the evolution of animal conflict."[6] Maynard Smith utilized game theory to better analyze the evolution of phenotypic traits, including animal behavior, when the trait's fitness depends on its frequency in the population.[3]

In particular, Maynard Smith formalized a central concept in game theory called the evolutionarily stable strategy (ESS), based on a verbal argument by George R. Price. A behavioral strategy is considered to be evolutionarily stable if it cannot be bettered as long as almost every other member in the population is doing it; it is not evolutionarily stable when a different strategy is introduced that can upset the balance.[3] This area of research culminated in his 1982 book Evolution and the Theory of Games. The Hawk-Dove game is arguably his single most influential game theoretical model. This game, also known as the game of chicken or snowdrift game, is a model of conflict for two players in game theory. The principle of the game is that while each player prefers not to yield to the other, the worst possible outcome occurs when both players do not yield. The name "Hawk-Dove" refers to a situation in which there is a competition for a shared resource and the contestants can choose either conciliation or conflict; this terminology is most commonly used in biology and evolutionary game theory.

Maynard Smith was elected a Fellow of the Royal Society in 1977. In 1986, he was awarded the Darwin Medal. He also developed and recovered from colon cancer.

Evolution of sex and other major transitions in evolution

Maynard Smith published in 1978 a book entitled The Evolution of Sex which explored in mathematical terms, the notion of the "two-fold cost of sex".[7] He theorized that the perceived advantage for an individual organism to pass only its own entire genome to its offspring is so great that there must an advantage by at least a factor of two to explain why nearly all animal species maintain a male sex.

During the late 1980s, Maynard Smith also became interested in other major evolutionary transitions, working with the biochemist Eörs Szathmáry. Together they wrote an influential 1995 book The Major Transitions in Evolution, a seminal work which continues to contribute to ongoing issues in evolutionary biology.[8][9]A popular science version of the book, entitled The Origins of Life: From the Birth of Life to the Origin of Language was published in 1999.

His final book, Animal Signals, co-authored with David Harper, was published in 2003 on signalling theory.

John Maynard Smith died of lung cancer on April 19, 2004, sitting in a high-backed chair, surrounded by books at his home in Lewes, East Sussex.[10] He was survived by his wife Sheila and their children.

Retrieved from https://www.newworldencyclopedia.org/p/index.php?title=John_Maynard_Smith&oldid=970912
Categories:
Hidden category:
This page was last edited on 4 July 2013, at 19:15.
Content is available under Creative Commons Attribution/Share-Alike License; additional terms may apply. See Terms of Use for details.