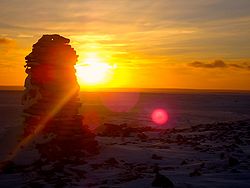 An inuksuk at Igloolik, Nunavut, Canada

An inuksuk, plural inuksuit, (from the Inuktitut: ᐃᓄᒃᓱᒃ, plural ᐃᓄᒃᓱᐃᑦ; alternatively inukshuk in English or inukhuk in Inuinnaqtun) is a stone landmark or cairn built by humans, used by the Inuit, Inupiat, Kalaallit, Yupik, and other peoples of the Arctic region of North America. These structures are found from Alaska to Greenland, a region above the Arctic Circle that is dominated by the tundra biome and has areas with few natural landmarks.

When Nunavut became a separate Canadian territory in 1999, the people chose for their flag a design that features an inuksuk. The 2010 Winter Olympics held in Vancouver used a representation of an inunnguaq (meaning imitation of a person), an inuksuk-like structure that looks like a person, as its logo. Despite disagreements over the choice, and the confusion between inuksuk and inunnguaq, the inuksuk has become popular as a symbol of Canadian culture.

Inuit today revere certain inuksuit because they were built by their ancestors. They provide an important link to the past generations, keeping a connection with the culture and knowledge of those who survived the harsh life in the Arctic. 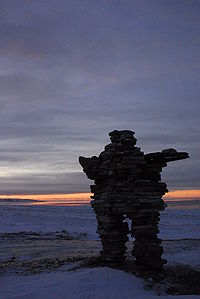 The word inuksuk means "something which acts for or performs the function of a person." The word comes from the morphemes inuk ("person") and -suk ("ersatz" or "substitute") in the Inuit language, Inuktitut. The plural is inuksuit.[1]

The word is pronounced inutsuk in Nunavik and the southern part of Baffin Island. In many of the central Nunavut dialects, it has the etymologically related name inuksugaq (plural: inuksugait).

It is often written inukshuk in English or inukhuk in Inuinnaqtun[2] However, the Governments of Nanavut and Canada support the Inuit-preferred spelling inuksuk.

A structure similar to an inuksuk, but meant to represent a human figure, is called an inunnguaq (ᐃᓄᙳᐊᖅ, "imitation of a person," plural inunnguat), has become widely familiar to non-Inuit. However, it is not the most common type of inuksuk, and it is distinguished from the traditional inuksuit.[3] 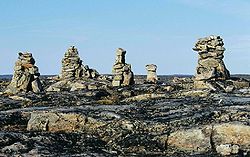 There are many styles of inuksuk, the most common built with stone placed upon stone. The structure may consist of a single upright stone, or a cairn-like structure created by stacking the stones on top of each other. Four general shapes of inuksuit can be found. The most elementary kind of inuksuit is the nalunaikkutaq ("deconfuser") that is made of a single upright stone. A second type consist of tikkuuti, which are pointers. They may appear as a triangular-shaped rock lying flat on the ground or a line of rocks arranged in a straight line, with the largest rock at one end grading down to the smallest at the other end, indicating the direction to be taken. The third type is the inuksummarik or inuksukjuaq, noted for its large size that allows it to be seen from a distance. Finally, there are inuksuit where an arrangement of stones at their base has been left as a message.[6]

Inuksuit appear throughout the Arctic, with several prominent forms along the shores and in the interior between Hudson Bay and Ungava Bay in Nunavik. Most hilltops near Inuit villages feature an inuksuk.[4]

There are unusual concentrations of between 100-200 inuksuit at Inuksualait (Enukso Point), at Foxe Peninsula on Baffin Island. The site was designated a National Historic Site of Canada in 1969.[7]

Varying in shape and size, the inuksuit have roots going back thousands of years and served an important role in the culture of peoples of the Arctic region. Many conveyed messages, while others were used as aids in hunting. Still others had a spiritual meaning. Many Inuksuit built long ago still remain. Even if their original meaning has been lost, they are respected and revered as a link to past generations.[6]

An inuksuk could be used for navigation, as a point of reference, a marker for travel routes, fishing places, camps, hunting grounds, places of veneration,[8] or to mark a food cache.[9] The Inupiat in northern Alaska used inuksuit when hunting to assist in the herding of caribou into contained areas for slaughter. Hunters could also hide behind a larger inuksuk.[9]

The practical information conveyed by an inuksuk could be quite complex. The arrangement of stones could convey vital messages to a traveler about the depth of snow, the safety or danger of a crossing place, or where food and supplies were cached. They also mark good hunting or fishing grounds, and some have been been constructed to form a small "window" through which a person can view distant inuksuit thus serving as navigational aids. Or they may simply indicate that the village is close by—a welcome sight to any traveler.[6]

In addition to such practical functions, other inuksuit have spiritual connotations. Some were constructed by shamans, and were believed to contain spirits, either friendly or dangerous, or other types of spiritual power.[6]

The Inuit and other peoples of the Arctic region continue to create and use inuksuk as navigation and other aids to support their lifestyle. In addition, the inuksuk has become popular as a cultural symbol, not only of these peoples, but more generally representing Canada.

An inuksuk on the flag of Nunavut Inuksuit continue to serve as a cultural symbol of the indigenous people of the Artic. Most notably, an inuksuk is shown on the flag of the Canadian territory of Nunavut, as well as the territory's coat of arms.

Artisan Alvin Kanak of Rankin Inlet, Northwest Territories (now in the territory of Nunavut), created an inuksuk as a gift to the city for Expo 86. The land has since been donated to the city, and is now a protected site.

The high school in Iqaluit is named Inuksuk High School. 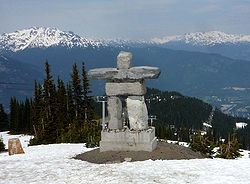 "Ilanaaq," the mascot logo of the 2010 Winter Olympics, located on Whistler Mountain

An inunnguaq named "Ilanaaq" (meaning friend) is the basis of the logo of the 2010 Winter Olympics designed by Vancouver artist Elena Rivera MacGregor. Its use in this context has been controversial, both among the Inuit and the First Nations of British Columbia. Although the design has been questioned, people believe it pays tribute to the inuksuk that stands at Vancouver's English Bay.

Following this use as an Olympic symbol, inuksuit—particularly, but not exclusively, of the inunnguaq variety—have increasingly served as a mainstream Canadian national symbol.

The markers have been erected throughout the country, including a nine-metre-high inuksuk that stands in Toronto on the shores of Lake Ontario. Located in Battery Park, it commemorates the World Youth Day 2002 festival that was held in the city in July 2002. 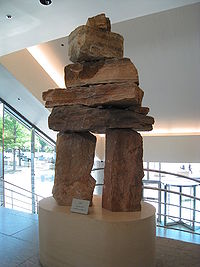 A large number of inuksuit have been built in some areas along the Trans-Canada Highway, including Northern Ontario. While they do not carry the same types of meaning as the traditional Inuit inuksuit, in fact some of them appear to have been created “out of intent to be silly,” many have meaning nonetheless. For example, one person who had built two inuksuit along the route attributed his action to having had a "fill the dreams moment where I needed to stop and do it" while driving home from a family funeral.[10]

Officials in various wilderness parks throughout Canada routinely dismantle inuksuit constructed by hikers and campers, for fear that they could misdirect park visitors from the cairns and other markers that indicate hiking trails.

Inuksuit around the world 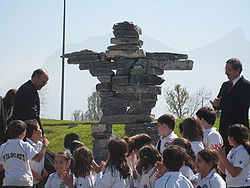 The inuksuk was also used as the symbol of the Summit of the Americas, because of its connotations of "guidance and unity...towards common goals."[11]

There are five authentic inuksuit which were donated—wholly or in part—by the government of Canada: in Brisbane, Australia; Monterrey, Mexico; Oslo, Norway; Washington D.C.; and Guatemala City.

The inuksuk in Monterrey Mexico was created by the Inuvialuit artist Bill Nasogaluak. It was presented to the people of the northern state of Nuevo León as a gift from the Monterrey chapter of the Canadian Chamber of Commerce in Mexico and the Government of Canada, to mark the chamber’s tenth anniversary in the city. The sculpture stands over the Santa Lucía Riverwalk.

Retrieved from https://www.newworldencyclopedia.org/p/index.php?title=Inuksuk&oldid=1009525
Categories:
Hidden category:
This page was last edited on 5 March 2018, at 23:08.
Content is available under Creative Commons Attribution/Share-Alike License; additional terms may apply. See Terms of Use for details.