The International Music Score Library Project (IMSLP) was a project, created by Edward W. Guo, an 18-year-old music student in Canada, for the creation of a virtual library of public domain music scores, based on media wiki software. Since its launch on February 16, 2006, more than 15,000 scores, for 9,000 works, by over one thousand composers were uploaded, making it one of the largest public domain music score collections on the web.[1] A number of reputable institutions and universities including MIT and Stanford commended IMSLP. The project used MediaWiki software to provide contributors with a familiar interface.

In 2007, however, Universal Edition, an Austrian music publishing firm, sent a cease and desist letter to Edward W. Guo for a possible lawsuit for copyright infringement. While the Canadian copyright is valid for 50 years after the copyright holder's death, in Austria it is valid for 70 years. Although Cuo's activities are perfectly legal in Canada and Austrian jurisprudence does not apply to actives in Canada, Cuo voluntarily closed IMSLP on October 19, 2007.[2] The case stirred discussions and controversies, catching the attention of BBC, who eventually reported about the case.[3] IMSLP went back online on June 30, 2008. A question still remains whether all online activities perfectly legal under a jurisprudence of one country have to consider legal implications in all counties on the earth and how jurisprudence can go beyond the boundary of a nation state. 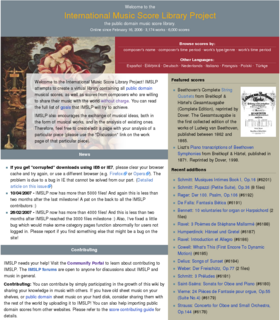 Edward W. Guo, known as Feldmahler, an 18-year-old Canadian music student, launched a non-commercial site using wiki software on February 16, 2006.[4] The library consisted mainly of scans of old musical editions out of copyright. In addition, it admitted scores by contemporary composers who wished to share their music with the world by releasing it under a Creative Commons license. It rapidly grew in a few short years. One of the main projects of IMSLP was the sorting and uploading of the complete works of Johann Sebastian Bach in the Bach-Gesellschaft Ausgabe (1851-1899). Besides J.S. Bach's, Frédéric Chopin's nearly complete oeuvre was available on IMSLP.

IMSLP had been officially recommended by MIT,[5][6] which also used it extensively in some of its OpenCourseWare courses.[7][8] It was suggested as a resource by university libraries at Oberlin Conservatory of Music,[9] Manhattan School of Music[10] Stanford University,[11] McGill University,[12] Brown University,[13] University of Maryland,[14] University of New Mexico, University of Washington,[15] University of Wisconsin-Madison,[16] California Institute of the Arts,[17] and it had been submitted to MERLOT by a member professor.[18]

On October 19, 2007, the IMSLP closed following legal demands from Universal Edition a classical music publishing firm of Vienna, Austria.[2] The cease and desist letter expressed concern that some works that are in public domain in the server's location in Canada with copyright protection of 50 years post mortem, but which are protected by the 70 years post mortem term in Austria and some other countries, were available in those countries. The administrator of the website, Edward W. Guo, known under the nickname Feldmahler, decided to close down the repository, but left the forums online so that discussions into the best way to proceed could be made:[19]

On Saturday October 13, 2007, I received a second Cease and Desist letter from Universal Edition. At first I thought this letter would be similar in content to the first Cease and Desist letter I received in August. However, after lengthy discussions with very knowledgeable lawyers and supporters, I became painfully aware of the fact that I, a normal college student, has neither the energy nor the money necessary to deal with this issue in any other way than to agree with the cease and desist, and take down the entire site. I cannot apologize enough to all IMSLP contributors, who have done so much for IMSLP in the last two years.

In response, director Michael S. Hart of Project Gutenberg offered support to keep the project online.[20] This offer was declined by Feldmahler, who voiced concern about having the project hosted in the United States, and consulted the Canadian wing of Project Gutenberg.[19] On November 2, 2007, Michael Geist, a prominent Canadian copyright academic, wrote an article for BBC discussing the specifics and the wider implications of this case.[21][22]

The Mutopia project is a volunteer-run effort to create a library of free content sheet music, in a way similar to Project Gutenberg's library of public domain books.

The music is reproduced from old scores that are out of copyright. The new scores are typeset with GNU LilyPond and distributed in PDF, PostScript, Midi, and LilyPond format.

Currently, there are more than 1300 pieces of sheet music available, more than half of which are pieces for piano. There are also many pieces for voice, and various other musical instruments. On the Mutopia project home page, there is a list with links to the most recently added pieces.

The Choral Public Domain Library (CPDL) is a sheet music archive which focuses on choral and vocal music in the public domain.

Music is available for free download in a variety of formats, including score images in PDF and TIFF format, sound files in MIDI and MP3 formats, and in the notation formats supported by various notation programs, including Finale, Finale Allegro, Finale PrintMusic, and Finale Notepad by MakeMusic, Sibelius, by Sibelius, Noteworthy composer, Encore, and the open source GNU Lilypond. Most scores on CPDL are distributed under an open-source license. CPDL archives over 8,900 scores contributed by over 400 editors and composers. It includes large numbers of scores by many composers, especially from the Renaissance period, including nearly complete vocal works by William Byrd and Tomás Luis de Victoria in excellent editions.

In 2005 CPDL was ported to wiki format, and is now accessible at ChoralWiki, making it easier for users to obtain more features beyond the mere archiving and making scores accessible for download from CPDL, including:

The Werner Icking Music Archive, often abbreviated WIMA, is a web archive of public domain sheet music. WIMA continues the defunct GMD Music Archive and is named after its founder, the late Werner Icking. At present the archive is held by Christian Mondrup.

The majority of the compositions represented in WIMA is early music. Some of the early music scores published in WIMA are the first modern editions of these compositions. A number of contemporary composers have chosen to publish their works in WIMA.

The older music offered in WIMA is out of copyright. The scores are electronically typeset by volunteers and distributed in PDF, often accompanied by their typesetting files.

Retrieved from https://www.newworldencyclopedia.org/p/index.php?title=International_Music_Score_Library_Project&oldid=1098499
Categories:
This page was last edited on 30 January 2023, at 14:14.
Content is available under Creative Commons Attribution/Share-Alike License; additional terms may apply. See Terms of Use for details.