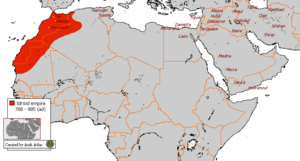 Idrisid Empire at its Greatest Extent.

The Idrisids (Arabic, الأدارسة ) were the first Sayyid Shi'a dynasty in the western Maghreb ruling from 788 to 985 and the first Shi'a dynasty in Islamic history. It represents one of the earliest examples of the assertion of political autonomy in a region at a distance from the Islamic center. The territories controlled by the Idrisids included the modern exclaves of Spain, Ceuta and Melilla. The dynasty is named after its first sultan, Idris I. The tradition of Sharifian rule that they established continued in the Maghreb, where the Kings of Morocco are still Sayyids, that is, descendants of Muhammad. Descent from Muhammad or from one of his relatives has often helped legitimize a Muslim’s claim to the throne of the state they govern. Situated between the Shi'a Fatimids in Egypt and the Sunni Umayyads in Cordoba, they were vulnerable to both. They tried to walk a diplomatic tight-rope at times appeasing one, then the other. They eventually fell to the Caliph of Cordoba, although for some time their survival had depended on Cordoba’s support. They were also responsible for the Arabization of Northern Morocco and established University of Al-Karaouine at their capital of Fez, which remains an important center of Muslim learning and is perhaps the oldest continually functioning higher education institution in the world.[1]

The founder of the dynasty was Idris ibn Abdallah (788-791), who traced his ancestry back to Ali ibn Abi Talib and his wife Fatima, daughter of the Prophet Muhammad. As a Sayyid Shi'a he was persecuted by the Abbasids and fled to the Maghreb in 786, settling initially in modern-day Tangier. In 788, he was invited by the chief of a tribal confederacy known as the Awraba to help Islamize the government. Moving to Walila, he was recognized as Imam, the preferred Shi'a title for the leader of the community. Known as Idris I, his rule represented the first autonomous Islamic state in Morocco. His claim to the title Imam angered the Abbasids, who sent an agent to assassinate him.

His son Idris II (791-828), then a small child, was proclaimed Imam in succession. From 809, Idris I made Fez, already colonized by his father, as his royal residence and capital. This became an important center of Islamic learning and culture not only in the region but also beyond. Its academy or university dates from 859, and attracted scholars from throughout the Muslim world and even from beyond, including some Christians and Jews. Its founder was a woman, Fatima Alfehri. Some of the most eminent Muslim intellectuals visited, taught or studied there.[2] Most historical data on the Idrisid rulers is derived from the work of Ibn Khaldun.[3] Still functioning, some consider this University to be the world's oldest institute of higher education. Fez is a UNESCO World Heritage site. The famous Kairouyine mosque was added by Yahya ibn Muhammad, the fifth Idrisid ruler. Through the settlement of refugees from Kairouan and Andalusia the city quickly became the focus for the Islamification and Arabisation of North Africa. At about the same time, an alternate summer capital Basra was constructed and named after the famous Shi’a city in southern Iraq. Idrisi II was Shi'a like his father but actually established a Sunni state, although it was descent from the Prophet that was used to legitimate the Idrisid dynasty. 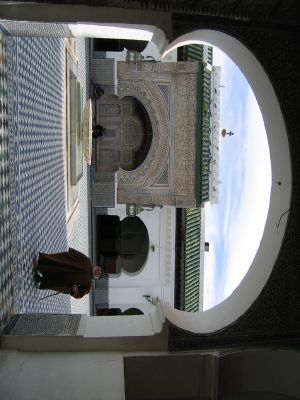 The famous Kairouyine University and Mosque date from the Idrisid dynasty saw the presence, among other eminent scholars, as Maimonides, Ibn Khaldun and Nur Ed-Din Al Betrugi, known in Europe as Alpetragius) (d 1204).

The Idrisids firmly established the principle of Sharifian dynastic rule in Morocco that has continued to the present, regardless of whether the ruler is Shi’a or, as they are currently, Sunni. The royal family of Jordan are also Sharifian, hence the offical name of the country as the 'Hashemite Kingdom of Jordan." The Idrisids most significant achievement lies in their “firmly implanting Islam in that corner of Africa and establishing a flourishing trade” with the Sub-Saharan region.[4]

The Idrisid realm was also extended through campaigns into the high Atlas Mountains and against Tlemcen, with the result that the Idrisid state became the most significant power in Morocco, ahead of the principalities of the Bargawata, the Salihids, the Miknasa and the Maghrawa of Sijilmasa.

Under Muhammad (828-836) the kingdom was divided amongst eight brothers, which produced several Idrisid statelets in northern Morocco. This led to intensified power struggles and eventually to the weakening and decline of the dynasty. Even when the realm was reunified under Yahya IV (904-917), it still lost significance through internal strife and attacks from the Fatimid dynasty, aided by their local Miknasa allies. From 909 until 1171, the Shi'a Fatimids claimed to be the legitimate rulers of the entire Muslim world, which brought them into conflict with the Abbasids, the Caliphs of Corboba, who also opposed the Abbasadis and rejected their right to use the title of caliph as well as with less powerful rulers such as the Idrisids of Morocco. Some clans also switched their allegiance from the Idrisids to the Caliphs of Corboba, further weakening their position. 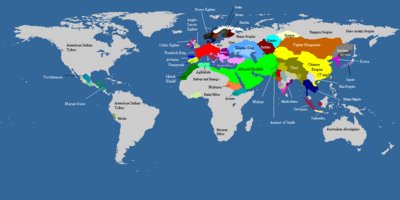 The World in 820 C.E. The Abbasid caliphate is colored light green, the Umayyads in Spain are yellow, and the Idrisids are darker green. The Fatimid dynasty would not be established until 917 and at its height streteched across North Africa and East to Jerusalem.

After defeats by the Fatimids in 917-920 the Idrisids were driven from Fez and control given to the Miknasa. Hassan I al-Hajam managed to wrest control of Fez for a couple of years but he was the last of the dynasty to hold power there.

Only with the support of the Umayyad Caliphs of Cordoba could the dynasty subsequently hold out against the Fatimids and their allies. After 926 the Idrisids abandoned Fez for good and withdrew to the valleys of the Rif mountains, where they had a stronghold in the fortress of Hajar an-Nasar. They were also protected to some extent by the reluctance of tribal elders to wipe out entirely the local descendents of the Prophet Muhammad's family.

The last Idrisid made the mistake of switching allegiances back to the Fatimids, and was deposed and executed in 985 by the Caliphate of Cordoba. The dynasty was succeeded in Morocco by the principality of the Maghrawa.

The establishment of a strong central government that takes priority over tribal leadership, based on the Sharifian claim to legitimacy, continues in the form of the Moroccan monarchy. The cultural and religious vitality of Islam in this corner of Africa is also an enduring aspect of the Idrisid legacy. Fez's role as an important center of learning also continued through until modern times.

Retrieved from https://www.newworldencyclopedia.org/p/index.php?title=Idrisid_dynasty&oldid=680454
Categories:
Hidden category:
This page was last edited on 2 April 2008, at 09:16.
Content is available under Creative Commons Attribution/Share-Alike License; additional terms may apply. See Terms of Use for details.