Huangdi Neijing (Simplified Chinese: 黄帝内经; Traditional Chinese: 黃帝內經; pinyin: Huángdì Nèijīng), also known as The Inner Canon of Huangdi or Yellow Emperor's Inner Canon, is an ancient Chinese medical text that has been treated as the fundamental doctrinal source for Chinese medicine to this day, for more than two millennia. It is comparable in importance to the Hippocratic Corpus in Greek medicine or the works of Galen in Islamic and medieval European medicine. The work is composed of two texts, of 81 chapters or treatises each in a question-and-answer format between the mythical Huangdi (Yellow Emperor or more correctly Yellow Thearch) and six of his equally legendary ministers.

The first text, the Suwen (素問), also known as Basic Questions, covers the theoretical foundation of Chinese Medicine and its diagnostic methods. The text, however, includes topics on feng sui, Qigong, acupuncture, herbal medicine, fortune telling, meteology, and astrology. The text is also one of the major texts in Taoism. The second and generally less referred-to text, the Lingshu (靈樞; Spiritual Pivot), discusses practical elements, particularly acupuncture therapy in great detail. Collectively, these two texts are known as the Neijing or Huangdi Neijing. In practice, however, the title Neijing often refers only to the more influential Suwen. Two other texts also carried the prefix Huangdi neijing in their titles: the Mingtang (明堂; "Hall of Light") and the Taisu (太素; "Grand Basis"), both of which have survived only partially.

According to the Neijing, the universe is composed of various principles, such as Yin and Yang, Qi and the Five Elements; human health is maintained by the work of these cosmic principles; the cosmic principles are both physical and spiritual; and moral virtue is an essential element for self-control. Thus, the Neijing describes, for example, how saints and sages maintained their health by being virtuous and keeping their spirit high. The integration of the spiritual and the physical, holistic approaches are some of unique characteristics of the Neijing, which is inherited by subsequent developments of Chinese medical traditions. 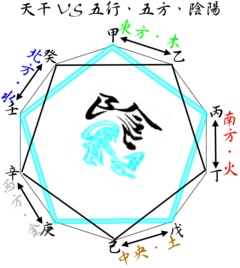 The relations of 10 heavenly stems with yin & yang, the five elements and the five directions.

The earliest mention of the Huangdi neijing was in the bibliographical chapter of the Hanshu 漢書 (or Book of Han, completed in 111 C.E.), next to a Huangdi waijing 黃帝外經 (“Yellow Emperor’s Outer Canon”) that is now lost. A scholar-physician called Huangfu Mi 皇甫謐 (215-282 C.E.) was the first to claim that the Huangdi neijing in 18 juan 卷 (or chapters) that was listed in the Hanshu bibliography corresponded with two different books that circulated in his own time: the Suwen and the Zhenjing 鍼經 (“Needling Canon”), each in 9 juan (Sivin 1993, 197). Since scholars believe that Zhenjing was one of the Lingshu's earlier titles, they agree that the Han-dynasty Huangdi neijing was made of two different texts that are close in content to the works we know today as the Suwen and the Lingshu.

The most important ancient book of Chinese medicine, as well as a major book of Daoist theory and lifestyle, is the Yellow Emperor's Inner Classic (Huangdi Neijing, 黃帝內經). The question-and-answer format predominant in the Suwen links together otherwise disjointed texts and is possibly useful for the (anonymous) authors to avoid attribution and blame [2]

The Neijing departs from the old shamanistic beliefs that disease was caused by demonic influences. Instead the natural effects of diet, lifestyle, emotions, environment, and age are the reason diseases develop. According to the Neijing, the universe is composed of various forces and principles, such as Yin and Yang, Qi and the Five Elements (or phases). These forces can be understood via rational means and man can stay in balance, or return to balance and health, by understanding the laws of these natural forces. Man is a microcosm that mirrors the larger macrocosm. The principles of yin and yang, the five elements, the environmental factors of wind, damp, hot and cold and so on that are part of the macrocosm equally apply to the human microcosm.

Three distinct philosophical perspectives of Neijing should be noted, which also influenced the framework of the traditions of the Chinese medical science.

First, the "nature" does not simply mean "material" or "physical" devoid of spiritual element. It is the characteristics of Chinese medical thought that the mental and the physical, the spiritual and the material are integrated and "nature," thus, means both components.

Second, the spiritual aspect or mental attitude plays a key role in controlling body or maintaining a balance (health) in human body. Since the principles of mind-body unity are exhibited as moral virtues such as self-control, medical science is inseparable from morality. For example, the Neijing describes how saints, sages, and "true-person" (morally perfected person) can live longer by observing the principles of the cosmos, which is both moral and physical. One must maintain a peace of mind and embody the moral virtues to maintain healthy body.

Historian of science Nathan Sivin (University of Pennsylvania) is of the opinion (1998) that the Suwen and Lingshu probably date to the first century B.C.E. He does not go into detail other than mentioning the Mawangdui excavations. Sivin (1998) is also of the opinion that "no available translation is reliable."

In pages 89-90 of the book Celestial Lancets (first published in 1980), authored by the highly respected scholars Joseph Needham (1900-1995) and Lu Gwei-Djen (1904-1991), it states that the consensus of scholarly opinion is that the Suwen belongs to the second century B.C.E. They further state that evidence shows that the Suwen is earlier than the first of the pharmaceutical natural histories, the 神農本草經 Shennong Bencao Jing (Divine Husbandman's Classic of the Materia Medica). So suggestive are parallels with third and fourth century B.C.E. literature that doubt arises as to whether the Suwen be better ascribed to the third century B.C.E., implying that certain portions of the Suwen may be of that date. The dominant role the theories of yin and yang, and the five elements play in the physiology and pathology, means that these medical theories are not older than about 320 B.C.E.

The German scholar Unschuld states several twentieth-century scholars are of the opinion that the language and ideas of the Neijing Suwen were composed between 400 B.C.E. and 260 B.C.E. Further, versions existing today are the last in a series of compilations, none of the versions that exist today are identical to the texts of the same name from the Han Dynasty (206 B.C.E.–220 C.E.) era (Unschuld 2003, 1-3) (Sivin 1988, 68)

Lü Fu (呂複), a fourteenth-century literary critic, was of the opinion that the Suwen was compiled by several authors over a long period. Its contents were then brought together by Confucian scholars in the Han Dynasty era (Unschuld 2003, 1).

In 762 C.E., Wang Bing finished his revision of the Suwen after laboring for 12 years. Wang Bing collected the various versions and fragments of the Suwen and reorganized it into the present 81 chapters (treatises) format. (Note, treatises 72 and 73 are lost and only the titles are known.) Originally his changes were all done in red ink, but later copyists incorporated some of his additions into the main text. However, the 1053 version discussed below restored almost all of his annotations and they are now written in small characters next to the larger characters that comprise the main or unannotated Suwen text (Unschuld 2003, 40, 44).

According to Unschuld (1988, 39, 62), Wang Bing's version of the Suwen was based on Quan Yuanqi's (early six century) commented version of the Suwen consisting of nine juan (books) and sixty-nine discourses. Wang Bing made corrections, added two "lost" discourses, and seven comprehensive discourses on the five phases and six qi, inserted over 5000 commentaries and reorganized the text into twenty-four juan (books) and eighty-one treatises (Unschuld 1988, 24, 39, and 46).

In his preface to his version of the Suwen, Wang Bing goes into great detail listing the changes he made.[3]

Not much is known about Wang Bing's life. He authored several books but is best known for his work on the Suwen. A note in the preface left by the later editors of the Chong Guang Bu Zhu Huangdi Neijing Suwen (version compiled by 1053 editorial committee) which was based on an entry in Tang Ren Wu Zhi (Record on Tang [Dynasty] Personalities) states that he was an official with the rank of tai pu ling and died after a long life of more than eighty years (Unschuld 1988, 40).[4]

The "authoritative version" used today, Chong Guang Bu Zhu Huangdi Neijing Suwen 重廣補註黃帝內經素問 (Huangdi Neijing Suwen: Again Broadly Corrected [and] Annotated), is the product of the eleventh-century Imperial Editorial Office (beginning in 1053 C.E.) and was based considerably on Wang Bing's 762 C.E. version (Unschuld 1988, 33-66) Some of the leading scholars who worked on this version of the Suwen were 林億 Lin Yi, 孫奇 Sun Qi, 高保衡 Gao Baoheng and 孫兆重 Sun Zhaotong.

For images of the Chong Guang Bu Zhu Huangdi Neijing Suwen printed in the Ming Dynasty, (1368-1644 C.E.) see the external links section below.

Recently (2003), the Chinese medicine history scholar Paul Unschuld, Hermann Tessenow, and their team at the Institute for the History of Medicine at Munich University have translated the Neijing Suwen into English including, an analysis of the historical and structural layers of the Suwen. No publishing date has been given for this multi-volume work (Unschuld 1988, x-xi).

Significant portions of the above Suwen translation (but with only a fraction of the annotations) are currently available in Huang Di nei jing su wen: Nature, Knowledge, Imagery in an Ancient Chinese Medical Text.

Retrieved from https://www.newworldencyclopedia.org/p/index.php?title=Huangdi_Neijing&oldid=1008831
Categories:
Hidden category:
This page was last edited on 16 January 2018, at 19:51.
Content is available under Creative Commons Attribution/Share-Alike License; additional terms may apply. See Terms of Use for details.