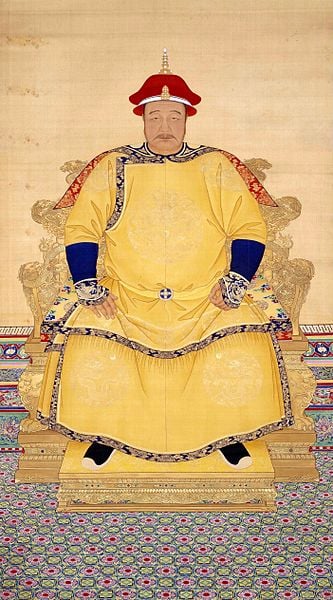 Huang Taiji (November 8, 1592 – September 21, 1643; reigned 1626 – 1643) (Chinese: 皇太極; pinyin: Huáng Tàijí; transliteration from Manchu: Hong Taiji or Hung Taiji) was responsible for consolidating the empire that his father, Nurhaci, had founded, being the first to adopt the title of "emperor" (huangdi). Although he died before the Ming dynasty had been completely conquered in China, he laid the groundwork for the almost three-hundred-year rule of the Qing dynasty (1644 – 1911). He founded an Imperial Ancestral Temple in the Qing capital Mukden. He was responsible for changing the name of his people from Jurchen to Manchu in 1635 as well as that of the dynasty from Late Jin to Qing in 1636.

Realizing that the Han people would always be the majority and the Manchus would remain a minority, Huang Taiji began incorporating Han officials in his administration as a means of controlling the Han people. Huang Taiji is often compared to the best emperors, such as the Yongle Emperor and Tang Taizong, because of his effective rule, ability to make use of talent, and skill at warfare.

in the Manchu language. Huang Taiji is also sometimes referred erroneously to as Abahai in Western literature. He was First Khan of the Later Jin and then Emperor of the Qing Dynasty, after he changed its name. His reign names were Tiāncōng (Chinese: 天聰, Manchu: Abkai sure) 1627-1636; and Chóngdé (Chinese:崇德, Manchu: Wesihun erdemungge) 1636-1643. His temple name was Tàizōng 太宗.

His posthumous name evolved to become longer and longer:

Early Life and Rise to Power

Huang Taiji was born November 28, 1592, the eighth son of Nurhaci ( 努爾哈赤), the Manchu leader who deposed the Ming dynasty and established the Jin dynasty. His father, Nurhaci, organized the Manchu into eight patrilineal military and administrative units called the Eight Banners, and assigned the leadership of each banners to one of his sons or nephews. Nurhaci himself controlled the two most powerful Yellow Banners until his death. His eldest son controlled the White Banner for most of Nurhaci’s reign, until he rebelled; then the Striped White Banner was given to Nurhaci's grandson and the Plain White was given to Huang Taiji. By the end of Nurhaci's reign, Huang Taiji controlled both White Banners.

When he died in 1626, Nurhaci bequeathed the leadership of the two powerful Yellow Banners to his sons by his consort Lady Abahai, fifteen-year-old Prince Dorgon (多爾袞) and fourteen-year-old DuDo. It is rumored that Huang Taiji caused Lady Abahai to commit suicide, in order to block the succession of her son, Prince Dorgon, to the throne. Huang Taiji then switched his White and Bordered White Banners with Dorgon and Dudo's Yellow and Bordered Yellow Banners, gaining control of the two strongest and most influential Banners. He gradually weakened his competitors, and eventually received the Plain Blue Banner, the third strongest Banner, from one of Surhaci's sons. These three Banners officially became the Upper Three Banners during the early part of the Qing Dynasty. 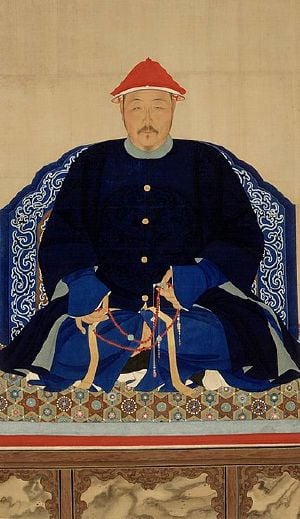 Nurhaci had despised the Han people, and had discriminated heavily against them during his reign. Huang Taiji, realizing that the Han people would always be the majority and the Manchus would remain a minority, and that he needed the support of Han people in order to avoid the fate of the Yuan Dynasty, began incorporating Han people into his administration and using officials of Han ethnic origin as a means of controlling the Han people. Though the Han officials at this time were still discriminated against, Huang Taiji started the process of combining the Han and Manchu ethnicities, a process which was advanced by Kangxi and Yongzheng, and fully completed during the reign of Qianlong. Beginning in the late 1620s, Huang Taiji incorporated allied and conquered Mongol tribes into the Eight Banner system. In 1635, a Mongolian "Eight Banners" was created. Four Han Chinese banners were created in 1639 and finally the full eight were established in 1642.

Huang Taiji was also the first to propose that taxes should never be increased, a principle which was applied until Kangxi's reign.

Huang Taiji continued the expansion of the state in the region later known as Manchuria, pushing deeper into Mongolia and raiding Korea and Ming China. His personal military abilities were widely praised. He effectively developed the Eight Banners or Banner system of military-civil administration, which was well-suited for incorporating different peoples, primarily Chinese and Mongols, who joined the Manchu state following negotiated agreements or military defeat.

Huang Taiji realized the advantage of the Red Cannons and later brought the Red Cannons into the army and upgraded the weapons of the Qing Empire. Though the Ming Dynasty still had a larger number of cannons, Huang Taiji now possessed the cannons of equal might, and Asia's strongest cavalry.

Huang Taji's original plan was to negotiate with the Ming Dynasty. If the Ming Dynasty were willing to give support and money that would benefit the Qing economy, the Qing Dynasty in exchange would not attack its borders, and would even allow it to be a country one level lower than the Ming Dynasty. However, the Ming Court were reminded of the Jin Empire during the Song Dynasty, and steadily refused the exchange, ultimately forcing Huang Taiji to take the offensive.

The Change from Jin to Qing

In 1635, Huang Taiji changed the name of his people from Jurchen to Manchu, or Manju in the Manchu language. The original meaning of Manju is not known and so the reasons for its adoption remain opaque. There are many theories as to the reason for the choice of name but two of the most commonly cited are its sounding similar to the Manchu word for "brave," and a possible connection with the Bodhisattva Manjusri, the Bodhisattva of Wisdom, of whom Nurhaci claimed to be an incarnation.

The dynastic name Later Jin was a direct reference to the earlier Jin Dynasty (1115-1234) founded by the Jurchen people, who ruled northern China from 1115 to 1234. The name of “Jin” was likely to be closely associated with the Jurchens and would perhaps evoke hostility from Han Chinese who viewed the Song dynasty (宋朝), rival state to the Jin, as the legitimate rulers of China at that time. Huang Taiji's ambition was to conquer China proper and overthrow the Ming dynasty, and he required not only a powerful military force but also an effective bureaucratic administration. Huang Taiji modeled his administration on that of the Ming government, and recruited Ming officials to his cause. If the name of “Later Jin” would prove an impediment to winning the cooperation of the Chinese, then it was necessary to change it. Huang Taiji proclaimed the establishment of the Qing dynasty in 1636.

The reasons for the choice of Qing as the new name are equally unclear, although it has been speculated that the sound - Jin and Qing are pronounced similarly in Manchu - may have influenced the choice. Another reason might have been the Chinese Five elements (wuxing) theory, the traditional idea that fire, associated with the character for Ming, was overcome by water, associated with the character for Qing. Huang Taiji may also have changed the name of the dynasty from (Later) Jin to Qing because of internecine skirmishes among the Jin princes. According to Taoist philosophy,the name Jin has the meaning of metal and fire in its constituent, thereby igniting the tempers of the brothers of the Manchu Royal household into open conflicts and wars. Huangtaiji therefore adopted the new name of Qing 清, the Chinese character of which has the water symbol (three strokes) on its left-hand side. It was hoped that the name, which means clear and transparent, with its water symbol, would put out the feud among the brothers of the Manchu Royal household.

Status of the Eight Banners

Huang Taiji, as emperor, held control of the three most elite of the Eight Banners, Yeloow, Bordered Yellow, and Plain Blue. Later, Dorgon switched third elite Banner from Plain Blue to Plain White. At the end of his reign, Huang Taiji gave the two Yellow Banners to his eldest son. Daisan, the second son of Nurhaci, controlled the two Red Banners, Dorgon and his two brothers controlled the two White Banners, and Surachi's son controlled the Blue Banners again.

Huang Taiji died on September 21, 1643, possibly at the hands of one of his officials, just a few months before his army would seize control of Beijing. He therefore did not live to realize his ambition of conquering Ming China, although his son, the Shunzhi Emperor, succeeded him and became the first of the Qing dynasty emperors to govern China. The Qing state’s success, not only in conquering China but also in establishing a capable administration which lasted for almost three hundred years, was largely due to the foresight and policies of Huang Taiji. His body was buried in Zhaoling, located in northern Shenyang.

Huang Taiji is often compared to the best emperors, such as the Yongle Emperor and Tang Taizong, because of his effective rule, ability to make use of talent, and skill at warfare. According to historian and writer Jin Yong, Huang Taiji had the broadmindedness of Qin Shi Huang, Han Gaozu, Han Gwuangwudi, Sui Wendi, Tang Taizong, Song Taizu, Kublai Khan, Ming Taizu, and Ming Chengzu, and his ability to utilize people was only paralleled by Genghis Khan and Tang Taizong. In this sense, though he died before completely conquering China, Huang Taiji is the true founding emperor for the Qing Dynasty.