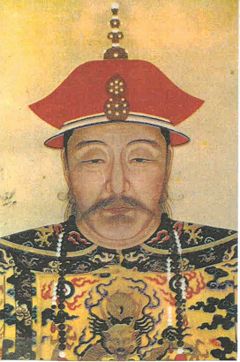 ; 1558 - 1626) was a chieftain of the Chien-chou Juchen, a Manchurian tribe, and is considered to be the founding father of the Manchu state in China, later known as the Qing dynasty. In a thirty-year series of military campaigns, Nurhaci unified the five Juchen (Jurchen) tribes along the Chinese borderlands, and then began attacking the Ming dynasty.

Nurhaci is known for establishing the Eight Banners, a patrilineal system of military and administrative organization which prevailed during the Qing dynasty and allowed the rulers to maintain their control over the military. He is also credited with ordering the creation of a written script for the Manchu language. Nurhaci's organization of the Manchu people, his attacks on China's Ming Dynasty and Korea's Joseon Dynasty, and his conquest of China's northeastern Liaodong province laid the groundwork for the conquest of China by the Qing Dynasty. Nurhaci reigned from 1616 until his death on September 30, 1626.

in the Manchu language. Nurhaci was the last chieftain of the Jianzhou Jurchens and First Khan of Later Jin. His Jurchen title as khan was Geren gurun-be ujire genggiyen Han (“Brilliant Khan Who Benefits All Nations”). His reign name was Tiānming (天命). (1616-1626) He was given a posthumous name in 1736: Chengtian-guangyun-shengde-shengong-zhaozhi-liji-renxiao-ruiwu-duanyi-qin'an-hongwen-dingye Gao Emperor (承天廣運聖德神功肇紀立極仁孝睿武端毅欽安弘文定業高皇帝). His temple name was Tàizǔ (太祖, T'ai Tsu).

Nurhaci was born in 1558. As a member of the Gioro clan of the Suksuhu River tribe, Nurhaci also claimed descent from Möngke Temür, a Mongol-Jurchen headman who lived some two centuries earlier. The Aisin Gioro family originated in present day North Korea. According to Chinese sources, the young man grew up as a soldier in the household of Li Chengliang in Fushun, where he became literate in Chinese. He named his clan Aisin Gioro around 1612, when he formally ascended the throne as Khan of Later Jin.

Nurhaci belonged to the tribe of Chien-chou Juchen, one of five Juchen (Jurchen) tribes on the periphery of the Chinese empire who were nominally under the sovereignty of the imperial court. The Chien-chou Juchen were located east of the Chinese border in the Long White Mountains north of the Yalu River; the four other Juchen tribes were farther north of the central forest and steppe region of Manchuria. The five tribes existed in a frontier rivalry encouraged by the imperial government as a means of preventing them from becoming too powerful. In 1582 Nurhaci’s father Taksi and grandfather Giocangga, led by the Ming Dynasty General Li Chengliang, were killed in an attack on Gure by a rival Jurchen chieftain Nikan Wailan. Beginning in 1583, Nurhaci began to unify the Jurchen bands. The same year, he beheaded Nikan Wailan at Tulin to avenge the deaths of his father and grandfather, who had left him only thirteen suits of armor.

In 1586 Nurhaci defeated a rival from his own tribe, who was supported by the Chinese. He spent the next thirty years defeating the other Juchen states, one by one. To isolate his Juchen opponents from the Chinese, Nurhachi invaded the Chinese-controlled part of Manchuria. In 1599, he had two of his translators, Erdeni Baksi and Gagai Jarguchi, create the written Manchu language by adapting the Mongolian alphabet.

Nurhaci exploited a monopoly on mining in the area, and the trade in pearls, fur, and ginseng from the area and from Korea, to amass a great fortune. He developed a new, profitable method of curing ginseng, a rare and valuable medicinal root. His tribute missions to Peking (Beijing), which combined tribute with trading ventures, gave him the opportunity to accumulate reserves of silver to finance his expansion into China.

Nurhachi's relationship to the Ming emperor at Peking was at first ambiguous. He himself went several times at the head of tribute missions to Peking. In 1601, Nurhachi proclaimed the foundation of a great “Yeh,” a family realm or state. In 1606, Nurhaci was granted the title of Kundulun Khan by the Mongols, and in 1608 C.E., Nurhaci stopped paying tribute to the Ming dynasty.

In 1615 C.E., Nurhaci established the Eight Banners, a system of military, political and economic units which made it possible for the conquered tribesmen to easily transfer their allegiance from local chieftains to his government. Nurhaci was the highest commander of the Eight Banners, and assigned leadership of each one to his sons and nephews, thus preserving the tradition of clan loyalty without endangering his own position of authority. The Banners also served as units of administration and taxation for the Manchu people.

In 1616, Nurhaci declared himself Khan (King) and founded the Jin Dynasty (aisin gurun), often called the Later Jin. (The first Jin Dynasty of the twelfth century was also formed by the Jurchen.) He constructed a palace at Mukden (present-day Shenyang in Liaoning province). Only after he became Khan did he finally unify Ula (clan of Abahai) and Yehe (clan of Monggo, and the last empress dowager Cixi.

In 1618, Nurhaci commissioned a document entitled “Seven Great Vexations” in which he enumerated seven grievances against the Ming government, and began to rebel against the Ming dynasty. A majority of the grievances concerned conflicts with the Yehe tribe, and Ming favoritism toward the Yehe. Nurhaci declared war and swiftly scored various victories in battles against the Ming forces. He already had defeated and absorbed two more of the Juchen rivals, the Hoifa and the Ula, into this domain, and the final showdown with the most dangerous opponent, the Yehe, and their Chinese supporters, was at hand. The Chinese border city of Fushun was captured when its commander, Li Yung-fang, defected to the Manchu side, recognizing an opportunity to serve a Manchu ruler without abandoning his Chinese cultural and political experience. He was the first of numerous Chinese officials who surrendered or were captured and entered Manchu service in an administrative capacity.

Nurhaci led many successful engagements against the Ming dynasty, the Koreans, the Mongols, and other Jurchen clans, gradually enlarging the territory under his control. In the first serious military defeat of his life, Nurhaci was beaten by the Ming general Yuan Chonghuan at Ningyuan. During the battle, Nurhaci was wounded by Yuan's Portuguese cannon (紅衣大炮). His morale and his physical body did not recover, and he died two days later on September 30, 1626 at the age of 68, at a little town called De-A Man (靉福陵隆恩門). His tomb is located in the east of Shenyang.

Although Nurhaci died before completing his conquest of the Ming dynasty, he laid the groundwork by unifying the Juchen tribes, creating a powerful and organized military force, and developing a system of administration which allowed his empire to expand successfully by absorbing the Mongols and the Chinese and utilizing their talents. The system of Eight Banners established by Nurhaci eventually became the backbone of the Qing military, and remained in place for three hundred years.

Nurhaci was succeeded by his eighth son, Huang Taiji whose name is often spelled Hong Taji. It is said that he took the throne by letting his father's consort Abahai commit suicide, in order to block the succession of his younger brother Dorgon. On his death, Nurhaci left his two elite Yellow Banners to Dorgon and DuDo who were the sons of his consort Abahai. Later, Huang Taiji switched his two White Banners for the two Yellow Banners to gain influence and power. Abahai’s suicide left no one to support the 14- and 15-year-old boys Dudo and Dorgon.

Huang Taiji, the changed the name of their tribe in 1635 to "Manchus" (or ManZhu). He changed the dynasty's name to "Qing" in 1636, and Nurhaci is usually referred to as the founder of the Qing Dynasty. Huang Taiji himself died a few months before his army took city of Beijing (Peking), and it was Nurhaci’s grandson, the Shunzi Emperor, who became the first Qing emperor to rule all of China.

Nurhachi had a harem of three wives and many concubines, mostly taken from the families of Juchen chieftains. He had 16 known sons, of whom the eighth, Hong Taiji (died 1643), succeeded him as khan. Another, Prince Dorgon, a brilliant general and leader, directed the final conquest of China and established the Manchu dynasty in Peking in 1644.

Information concerning Nurhaci can be found in later works such as the Manchu Veritable Records (in Chinese Manzhou Shilu 滿洲實錄, in Manchu the Yarkiyang Kooli.) Good contemporary sources are also available. For instance, much material concerning Nurhaci's rise is preserved within Korean sources such as the Veritable Records of the Joseon Dynasty (Joseon Wangjo Sillok朝鮮王朝實錄), especially the Seonjo Sillok and the Gwanghaegun Ilgi. The record of Sin Chung-il's trip to Jianzhou is preserved in the Seonjo Sillok.

The original Manchu language written records from Nurhaci's reign also survive. A revised transcription of these records (with the dots and circles added to the script) was commissioned by the Qianlong emperor. This has been translated into Japanese, under the title Manbun roto, and Chinese, under the title Manwen laodang. A project is currently under way at Harvard to translate them into English, as the Old Manchu Chronicles (Retrieved August 22, 2007).