Horace Newton Allen (1858 - 1932), a Protestant, medical missionary from the United States, who later also served as a diplomat, made a remarkable impact on his mission country, Korea, where he arrived in 1884. He was the first Protestant missionary to work in the country. In 1885, he established Korea's first modern medical facility, Gwanghyewon, which has grown into the Yonsei University Severance Hospital and School of Medicine. In 1887, he accompanied Korea's first diplomatic delegation to Washington. He also wrote some of the first books introducing Korean culture to the western world.

Horace and Mrs. Allen in Seoul

Horace Newton Allen was born in Delaware, Ohio, on April 23, 1858. He received his undergraduate degree at Ohio Wesleyan University, in 1881, and subsequently graduated from medical school at Miami University, Oxford, Ohio, in 1883. After finishing his education, he served as a medical missionary in Nanjing and Shanghai, China, taking with him his wife and young child. They did not feel particularly welcomed in China, and hoped for a different experience in Korea.

The earliest recorded protestant missionary in Korea, Horace Newton Allen was appointed on a mission to Korea by the Board of Foreign Missions of the Presbyterian Church, and arrived in the country on November 26, 1884. In the previous few decades dozens of French catholic missionaries and thousands of converts had been massacred by regent Daewongun and King Gojong. Just two years before his arrival, the United States and Korea had signed a Treaty of Amity and Trade, one stipulation of which was that Korea would not interfere with the work of Christian missionaries from the United States. Still, there was a risk to overt missionary work, as the treaty had not yet been tested in action, so Allen was assigned as a medical missionary, rather than an evangelist. As time went by, he also found himself working with, and eventually joining, the United States diplomatic corps in Korea.

Soon after his arrival in Korea with his family, Allen's medical expertise was tested in the aftermath of Gapsinjeongbyeon, an attempt to overthrow King Gojong's government. During the fighting, a nephew of Queen Min, Prince Min Young Ik had been stabbed and badly injured. The German diplomat Paul Georg von Möllendorff, knowing about Allen's medical training, quickly sent for him. Under Allen's modern medical treatment methods, unknown to Korea at the time, Prince Young Ik recovered in three months. This demonstrated the benefit of western medicine to the Korean public and initiated a close connection between Allen and Gojong.

Allen continued to provide medical care to the royal family, and to the foreign diplomats in Seoul. 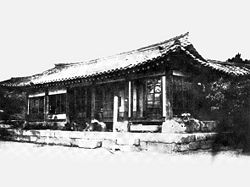 The medical center, later renamed Jejungwon (제중원 濟衆院, House of Universal Helpfulness) primarily functioned as a hospital, but also provided medical training, admitting its first class of 16 students in 1886. Although initially funded by the royal court, as the financial and political situation in Korea became more difficult in the 1890s, the Presbyterian Church of the United States temporarily took up the full support of the hospital. Later, the administration of the medical school became independent from the hospital, and after receiving support from philanthropist Louis H. Severance and the ecumenical Union Council of Korean Missionaries, it was renamed Severance Union Medical College in 1913. In January 1957, Severance Union Medical College and Yonhi College, founded in 1915 by Presbyterian missionary Horace G. Underwood were combined to form Yonsei University. The name Yonsei was created by taking the first syllable from each of the two schools' names.

King Gojong frequently called upon Allen, as one of the earliest westerners in Korea, to advise and inform the King about matters relating to the western world. Because of his knowledge of Korea and its people, Allen's diplomatic abilities were invaluable both to Korea and his home country of the United States. In 1887, Allen accompanied the first Korean diplomatic delegation to Washington, and served as an adviser to the Korean mission in Washington for almost two years, until in 1890, he was appointed secretary to the American legation in Seoul. 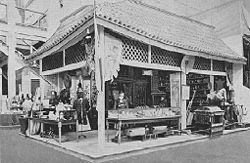 Korean Booth at the Columbian Exhibition 1893

A few years later, King Gojong was trying to make arrangements to send Korean representatives to the World's Columbian Exhibition, being held in Chicago in 1893, but the King did not have anyone to handle the introductions and arrangements. By chance, he discovered that Allen planned to attend the World's Fair, and he asked Allen to escort the Korean representatives to the fair and help make all the necessary arrangements. It was a very complicated undertaking, procuring space from the Exhibition organizers, transporting the 26 cases of goods and the group of Korean participants, who had not traveled outside of Asia before. Allen rose to the challenge and made King Gojong's plan a reality. King Gojong awarded Allen the Taeguk First Class order of merit in appreciation for Allen's years of advise and assistance.

By 1897, Allen was United States Minister Plenipotentiary (Ambassador) to the Korean Empire and consul general. He tried to encourage the U.S. to support Korea during the Russo-Japanese War, but this was not well-received by the U.S. government whose policy was in accord with the Taft-Katsura Agreement.

As the Japanese began to take control of Korea, many of the foreigners in the country began to leave. Allen returned to the United States in 1905, and took up a medical practice in Toledo, Ohio, where he died on December 11, 1932, with Korea still under the control of the Japanese.

Allen's writings introduced Korea to the English-speaking world. His publications include:

Retrieved from https://www.newworldencyclopedia.org/p/index.php?title=Horace_Newton_Allen&oldid=1097795
Categories:
This page was last edited on 25 January 2023, at 16:18.
Content is available under Creative Commons Attribution/Share-Alike License; additional terms may apply. See Terms of Use for details.