Horace Mann (May 4, 1796 – August 2, 1859) was an American abolitionist and education reformer. He greatly advanced the cause of universal, free, non-sectarian public schools. Mann also advocated temperance, hospitals for the mentally ill, and women's rights. His preferred cause was education, about which he remarked that while "other reforms are remedial; education is preventative."

Horace Mann was born in Franklin, Massachusetts. His childhood and youth were passed in poverty, and his health was impaired early by hard, manual labor. His only means for gratifying his eager desire for books was the small library founded in his native town by Benjamin Franklin and consisting principally of histories and treatises on theology. He received limited formal education as a young child, but succeeded in entering Brown in the sophomore class. He graduated as valedictorian in 1819.

After graduation he decided to study law Wrentham, Massachusetts. Mann was admitted to the bar in 1823. For 14 years, first at Dedham, Massachusetts then after 1833 in Boston, he devoted himself, with great success, to his profession. While in Dedham, home of the nation's first free, tax-supported public school, he served on the school committee.

Mann was elected to the Massachusetts House of Representatives from 1827 to 1833 and to the Massachusetts Senate from 1833 to 1837, for the last two years as Senate President. During this period, Mann was instrumental in the enactment of laws prohibiting the sale of alcohol, establishing state mental institutions, and in 1835, he cast his vote in favor of creating the nation's first state education board.

It was not until he became secretary of the newly created board of education of Massachusetts (1837) that he began the work which was soon to place him in the foremost rank of American educationists. He held this position and worked with a remarkable intensity, holding teachers' conventions, delivering lectures and addresses, and carrying on an extensive correspondence. He introduced several important reforms and planned and inaugurated the Massachusetts normal school system in Lexington and Bridgewater. Mann founded and edited The Common School Journal and prepared a series of annual reports, which had a wide circulation and are still considered as being among the best expositions. Most importantly, he worked effectively for more and better equipped school houses, more required years in school (until 16 years old), higher pay for teachers, and a wider curriculum. Also, he wanted immigrants to the U.S. to be "Americanized."

The practical result of Mann's work was a revolution in the approach used in the common school system of Massachusetts, which in turn influenced the direction of other states. In carrying out his work, Mann met with bitter opposition by some Boston schoolmasters who strongly disapproved of his pedagogy and innovations, and by various religious sectarians, who contended against the exclusion of all sectarian instruction from the schools. He is often considered "the father of education."

Hence it is, that the establishment of a republican government, without well-appointed and efficient means for the universal education of the people, is the most rash and fool-hardy experiment ever tried by man. Such a Republic may grow in numbers and in wealth. As an avaricious man adds acres to his lands, so its rapacious government may increase its own darkness by annexing provinces and states to its ignorant domain. Its armies may be invincible, and its fleets may strike terror into nations on the opposite sides of the globe, at the same hour. Vast in its extent, and enriched with all the prodigality of nature, it may possess every capacity and opportunity of being great, and of doing good. But if such a Republic be devoid of intelligence Such a Republic, with all its noble capacities for beneficence, will rush with the speed of a whirlwind to an ignominious end; and all good men of after-times would be fain to weep over its downfall, did not their scorn and contempt at its folly and its wickedness, repress all sorrow for its fate. . . . 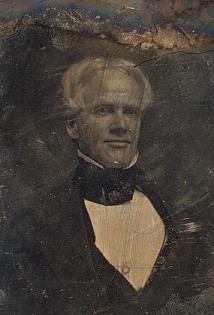 From 1853 until his death in 1859, he was president of the newly established Antioch College at Yellow Springs, Ohio, where he taught political economy, intellectual and moral philosophy, and natural theology. The college received insufficient financial support once he took the post and suffered from the attacks of religious sectaries—he himself was charged with insincerity because, previously a Calvinist by upbringing, he joined the Unitarian Church. The college was founded by the Christian Connexion, who later withdrew their funding, but Mann had earned the love of his students and by his many addresses exerted a beneficial influence upon education in the Midwest. The change from Calvinism to Unitarianism followed the death of his wife, when a God who punished people and predestined all acts no longer appealed to him. The Unitarian emphasis on the "kindness and ethical integrity of God" did.[1]

He had married Charlotte, daughter of Asa Messer, Unitarian president of Brown University, in 1830. He remarried in 1843. His second wife, Mary Peabody, was also a Unitarian. Mann also helped to establish a Unitarian Church at West Newton, Massachusetts.[2]

He is buried in the North Burial Ground in Providence, Rhode Island.