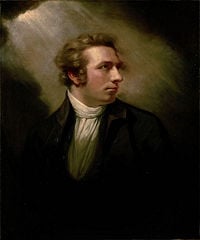 Henry Fuseli (in German, Johann Heinrich Füssli) (February 7, 1741 – April 16, 1825) was a painter, draughtsman, and writer on art, who was born in in Zurich, Switzerland, but later settled permanently in England.

He is viewed by some art historians as a prime exponent of Neoclassicism, while others view him as a precursor of Symbolism and Surrealism. He was a fervent admirer of Shakespeare and John Milton and spent most of his active career in England. His most famous painting is The Nightmare (1781), in which a gargoyle type creature sits on a young woman sleeping in a strained posture.

He was a painter of heroic, literary, and surreal themes that often depicted elemental spirits, goblins, and other-worldly beings. He studied religion and theology, but came to detest it. The spiritual figures in his work are frequently dark and malevolent spirits. He was often maligned by his peers but in 1790 when he became an Royal Academician, reviews were milder and more generous until his death.

He was born in Zürich, Switzerland, the second of eighteen children. His father was Johann Caspar Füssli, a painter of portraits and landscapes, and author of Lives of the Helvetic Painters. His Godfather, Salomon Gessler, was also a landscape artist and theorist and his fathers' friends were poets and painters. Entomology was an important family interest and brother Caspar became a professional in the field.

His father was a collector of sixteenth- and seventeenth century Swiss art. Füssli imparted to his son an appreciation of the Neoclassical ideas of Johann Joachim Winckelmann and Anton Raphael Mengs. The young Fuseli took an avid interest in his father's art collection and began making sketches of the drawings when he was eight. His father disapproved of his artistic interests and decided that his son should be a Zwinglian minister. He received a classical education at the Caroline College of Zurich.[1] One of his schoolmates was Johann Kaspar Lavater, with whom he became close friends. 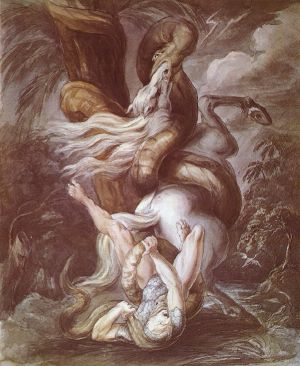 After taking orders in 1761 Fuseli was forced to leave the country as a result of having helped Lavater expose an unjust magistrate, whose powerful family sought revenge. He first traveled to Germany, where he came in contact with the German Enlightenment and which had a large influence on him. After a short while he obtained a transfer to England, in 1765, where he supported himself for some time by miscellaneous writing. He was also introduced to the theater, especially Shakespeare and was inspired by David Garrick's performances, which anticipated the Method, as used in modern times.

In 1764, Fuseli went to London to work as a translator of French, German, and Italian books. At the age of twenty-four, he translated into English Reflections on the Painting and Sculpture of the Greeks by the German Neo-Classical theorist J.J. Winkelmann. However, Fuseli did not become Winkelmann's follower. He also admired another great intellectual figure of the time, Jean-Jacques Rousseau, whom he met, but eventually broke with his ideas. Fuseli's book on the French philosopher, Remarks on the Writing and Conduct of J. J. Rousseau, was published anonymously in 1767.[2] 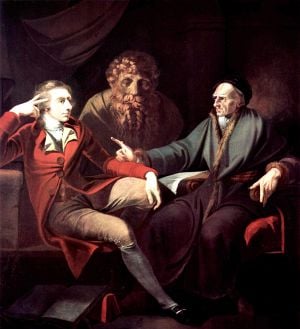 He later declared himself, in a letter to a friend, a decided non-Christian. Eventually, in the society in which he moved, he became acquainted with the Portraitist Sir Joshua Reynolds, to whom he showed his drawings.

Although drawing was his secondary interest to literature, he felt that praise coming from someone of Reynolds caliber pointed the way to his future and from then on wholly devoted himself to art. In 1770, he made an art-pilgrimage to Italy, where he remained till 1778, changing his name from Füssli to Fuseli, because it was more Italian-sounding. He still was inclined to literature and in particular Goethe.

Early in 1779, he returned to Britain, stopping in Zürich to visit his father for the last time. He found a commission awaiting him from Alderman Boydell, who was then organizing his famous Shakespeare Gallery. Fuseli painted a number of pieces for Boydell, and published an English edition of Lavater's work on physiognomy. He likewise gave William Cowper some valuable assistance in preparing a translation of Homer.

In 1788 Fuseli started to write essays and reviews for the Analytical Review. His distinguished colleagues included Thomas Paine, William Godwin, Joseph Priestley, Erasmus Darwin, and Mary Wollstonecraft. Fuseli frequented the home of Joseph Johnson, a publisher and prominent figure in radical British political and intellectual life. When Louis XVI was executed in France in 1793, he condemned the revolution as despotic and anarchic. 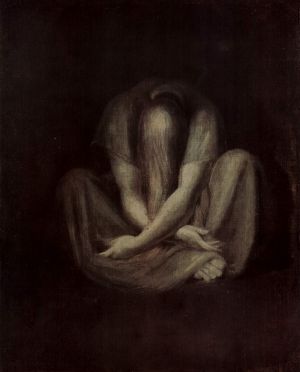 In 1799, he was appointed professor of painting at the Royal Academy, and keeper of the Academy in 1804. Among his pupils were John Constable (1776-1837), the major English landscape painter of his time, Benjamin Robert Haydon (1786-1846), William Etty (1787-1849), and Edwin Landseer (1802-73), who first exhibited at the age of twelve. William Blake, who was sixteen years his junior, recognized a debt to him, and for a time many English artists copied his mannerisms. Blake wrote of Fuseli:

The only man that ever I knew, Who did not make me almost spew Was Fuseli: He was both Turk and Jew— And so, dear Christian Friends, how do you do?

In 1799, Fuseli exhibited a series of paintings from subjects furnished by the works of John Milton, with a view to forming a Milton gallery corresponding to Boydell's Shakespeare gallery. There were 47 Milton paintings, many of them very large; they were completed at intervals in the space of nine years. The exhibition, which closed in 1800, proved a commercial failure.

Antonio Canova, when on his visit to England, was much taken with Fuseli's works, and on returning to Rome in 1817 caused him to be elected a member of the first class in the Academy of St Luke. Fuseli, after a life of uninterrupted good health, died at Putney Hill, at the advanced age of eighty-four, and was buried in the crypt of St Paul's Cathedral. He was relatively wealthy at his death. 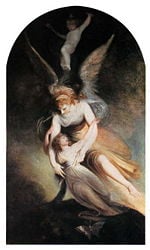 The Apotheosis Of Penelope Boothby (1792). 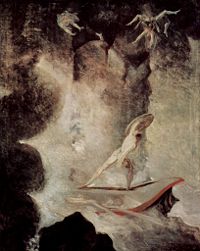 As a painter, Fuseli favored the supernatural. He pitched everything on an ideal scale, believing exaggeration necessary in the higher branches of historical painting. In this theory he was confirmed by the study of Michelangelo's works and the marble statues of the Monte Cavallo, which he studied while in Rome. The violent and intemperate action which he often depicted, seems to destroy the grand effect of many of his pieces. A striking illustration of this occurs in his famous picture of "Hamlet breaking from his Attendants to follow the Ghost:" Hamlet, it has been said, looks as though he would burst his clothes with convulsive cramps in all his muscles.[4]

His figures are full of life and earnestness, never languid nor cold, and seem to have an object in view which they follow with intensity. Like Rubens he excelled in the art of setting figures in motion. Though the lofty and terrible seemed his proper sphere, Fuseli had a fine perception of the ludicrous. The grotesque humor of his fairy scenes, especially from A Midsummer-Night's Dream, is no less remarkable than the poetic power of his more ambitious works.[4]

As a colorist, Fuseli scorned a set palette like other artists and instead dashed his tints recklessly. Often he used his paints in the form of a dry powder, which he hastily combined on the end of his brush with oil, or turpentine, or gold size, regardless of the quantity, and depending on accident for the general effect. This recklessness may perhaps be explained by the fact that he did not paint in oil until he was twenty-five years of age. Despite these drawbacks he possessed the elements of a great painter.[4] 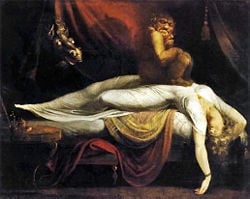 Fuseli painted more than 200 pictures, but he exhibited only a minority of them. His earliest painting represented "Joseph interpreting the Dreams of the Baker and Butler;" the first to excite particular attention was The Nightmare, exhibited in 1782.

He painted this after a failed romance with Lavater's niece Anna Landolt and it is thought that this painting is somehow related to their relationship. In The Nightmare a young woman has a demonic looking incubus sitting on her; the monster literally is a burden on her heart. She lies in a sprawl, with her arm hanging down. A horse, the "night mare" gazes through the curtains observing or leering. it is not clear whose nightmare Fuseli is portraying as the woman is part of the scene herself. The work became so popular that Fuseli painted several other versions on request. One version of The Nightmare was published in Erasmus Darwin's poem The Botanic Garden (1789-91). In France, The Nightmare inspired Charles Nodier's fantasy story Smarra, ou Les Démons de la nuit (1821).[2]

In many of his works a picture of humans being dominated by super-natural forces is portrayed and he was very adept at turning these super-realities into solid form. This is most evident in his Hamlet and the Ghost and Julius Caesar. He wrote, "One of the most unexplored regions of art are dreams and what may be called the personification of sentiment."[5]

His sketches or designs numbered about 800; they have admirable qualities of invention and design, and are frequently superior to his paintings. In his drawings, as in his paintings, his method included deliberately exaggerating the due proportions of the parts and throwing his figures into contorted attitudes. One technique involved setting down arbitrary points on a sheet, which then became the extreme points of the various limbs—rather like creating a constellation from the unintentional relations of stars. Notable examples of these drawings were made in concert with George Richmond when the two artists were together in Rome. 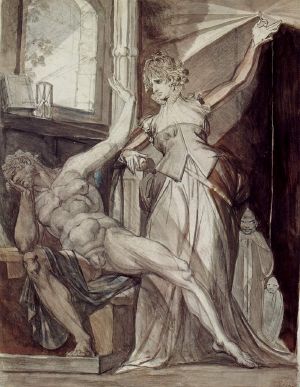 He rarely drew figures from life, basing his art on the study of antique statues and Michelangelo. He produced no landscapes—"Damn Nature! she always puts me out," was his characteristic exclamation—and painted only two portraits.[4]

His range of perception was large. He was a thorough master of French, Italian, English and German, and could write in all these tongues with equal facility and vigor, though he preferred German for his thoughts. His writings contain passages of the best art-criticism that English literature has to offer. The principal works are his twelve Lectures in the Royal Academy, which commenced in 1801.

After Fuseli's death, his wife burned many of the erotic drawings and his work fell mostly into neglect. His reveries inspired Edgar Allan Poe's short story The Fall of the House of Usher, but it was not until the 20th century when his surrealistic works were rediscovered by Freudian art critics. Among his admirers was H.P. Lovecraft, who confessed that "Fuseli really brings a shiver while a cheap ghost-story frontispiece merely makes us laugh." The Nightmare probably inspired also Salvador Dali's painting Invisible Sleeping Woman, Horse, Lion (1930).[2] His work can also be seen as a precursor to all forms of Surrealism.

The Nightmare has become a touchstone in the horror genre, having been used to illustrate various editions of Mary Shelley’s Frankenstein: or The Modern Prometheus. Shelley was the daughter of Mary Wollstonecraft.[6]

Retrieved from https://www.newworldencyclopedia.org/p/index.php?title=Henry_Fuseli&oldid=1064455
Categories:
Hidden category:
This page was last edited on 8 February 2022, at 13:41.
Content is available under Creative Commons Attribution/Share-Alike License; additional terms may apply. See Terms of Use for details.