This article is about the publisher and soldier. For the United States Representative and Senator from Massachusetts, see: Harrison Gray Otis (lawyer).

Harrison Gray Otis (February 10, 1837 – July 30, 1917) was an American newspaper mogul, the owner and editor-in-chief of the Los Angeles Times. Harrison Gray Otis built the LA Times into a prosperous newspaper and important political power in California. He used his newspaper to support his conservative political beliefs, influencing public opinion. Under his leadership the LA Times became a firm right-wing bastion in the fight against labor unions. The use of editorial power in this way can easily lead to abuses. The LA Times under his leadership was hardly a conveyor of the facts, but rather Otis' view of them. Although he believed his views were best for his community, his uncompromising stance led to conflict and tragedy when his venomous attacks on the unions led to violence and the bombing of the LA Times building.

Otis also played an important role in the development of Los Angeles and California in general. Under his influence, Los Angeles grew from a small frontier town to a major urban area with more than half-million people. Thus, his legacy is one of substantial success, both in developing the newspaper and the city of Los Angeles, but also a warning regarding the dangers of abusing the power of the mass media to antagonize those of different perspectives.

Harrison Gray Otis was born on February 10, 1837 near Marietta, Ohio, the youngest of 16 children of Stephen and Sarah Otis. His family was famous for its patriotism—his grandfather served in the Revolutionary War, while his father was an abolitionist who helped runaway slaves. Otis received little formal education. At the age of 14, he started to work as a printer’s apprentice, deciding to pursue career in publishing. He later studied at a commercial college in Columbus, Ohio.

Start of a career

In 1959, Otis married Eliza A. Wetherby and settled down in Louisville, Kentucky. He started to work for the Louisville Journal, under the famous editor, George D. Prentice. He also briefly dove into political waters, being elected to the Republican National Convention that nominated Abraham Lincoln for president. After the Civil War broke out, he volunteered for the Union army and fought in William McKinley's regiment, the 23rd Ohio Infantry. He became a highly regarded officer.

After the war in 1867, Otis became a compositor and later a Foreman of Printing in the Government Printing Office in Washington, D.C. He also joined the International Typographers' Union. From 1871 to 1876, he worked in the U.S. Patent office. During that time he visited California several times and saw it as a land of opportunity. In 1870, he resigned from all his positions and moved with his family to Santa Barbara.

After moving to California, Otis took over the Santa Barbara Daily Press from William W. Hollister. He also attempted several other businesses. However, after his business ventures failed, in 1882 he scraped together $6,000 and bought quarter interests in the newly founded but failing Los Angeles Daily Times. He became editor of the paper, writing editorials and local news. His wife Eliza contributed with articles on women issues, education, and religion. In 1883, Otis and H. H. Boyce became co-owners of the paper now called the Los Angeles Times, and in 1886 Otis bought out all Boyce’s interests and named himself president, general manager, and editor-in-chief.

When the Spanish-American War broke out in 1898, Otis asked his former commander William McKinley, now the commander-in-chief, for an appointment as Assistant Secretary of War. Secretary of War Russell A. Alger, however, did not want the conservative Otis serving under him, and Otis was rejected. Now at the age of 62, Otis volunteered for the army once again and was appointed brigadier general of volunteers. He served in the Philippines, commanding the 1st Brigade, 2nd Division, VIII Corps during the Philippine-American War.

After the war, Otis returned to his position at the Los Angeles Times. He used his business and political influence as well as his newspaper to sway public opinion to his side. His support for Los Angeles was instrumental in the growth of the city. He was a member of the San Fernando Syndicate, a group of investors who bought land in the San Fernando Valley based on inside knowledge that the Los Angeles aqueduct would soon irrigate it. Otis used the LA Times to frighten citizens (with news stories of a false drought) to vote for a 1905 bond issue that funded the aqueduct. He was also instrumental in the development of Los Angeles Harbor at San Pedro. During his stay at the head of the LA Times, Los Angeles grew from a small town of 12,000 people to a major urban area with a population of over 500,000.

Otis' editorial policy was based on civic "boosterism," extolling the virtues of Los Angeles and promoting its growth. Towards those ends, the paper supported efforts to expand the city's water supply by acquiring the watershed of the Owens Valley. Otis also was staunchly Republican, which was reflected in the paper's editorial and news content. Historian Andrew Rolle called Otis "the single most important force in Los Angeles aside from government itself." 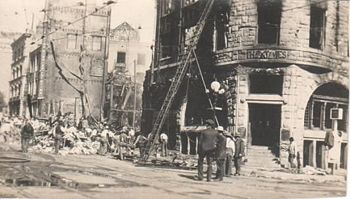 Rubble of the Times building after the bombing

Otis was known for his right-wing political views, which were reflected in the paper. He was instrumental in suppression of Los Angeles' burgeoning labor movement. The efforts of the LA Times to fight local unions led to the October 1, 1910 bombing of its headquarters and the home of Otis, killing 21 people. Otis used the event to further his fight against unions. Two union leaders, James and Joseph McNamara, were charged with the murders. The American Federation of Labor hired noted trial attorney Clarence Darrow to represent the brothers, who eventually pleaded guilty. The paper soon relocated to the Times Building, a Los Angeles landmark. His home, also known as the Bivouac, was later donated to the County of Los Angeles and became the Otis Art Institute, now called Otis College of Art and Design

Otis remained in control of the Los Angeles Times until his death, working closely with his successor Harry Chandler, the husband of his daughter, Marian Otis Chandler. Shortly before his death, Otis donated his MacArthur Park property together with its Spanish-Moorish mansion The Bivouac to the County of Los Angeles “for the advancement of the arts.” It was turned into Otis Art Institute in 1918, as the first public, independent professional school of art in Southern California.

Harrison Gray Otis built the Los Angeles Times into a prosperous newspaper and important political power in California. Its firm conservative editorials and uncompromising stance against labor unions helped employers in California maintain open shop (a place of employment that does not require union membership) policies. His venomous attacks on unions, however led to a violent clash with unions and bombing of the LA Times building in which 21 people died.

Otis was also one of the key figures in the growth and prosperity of Los Angeles and California in general. Under his influence, Los Angeles grew from a small frontier town to a major urban area with more than half-million people. He helped build the harbor and brought a water supply 240 miles over the mountains from the Owens River.

Retrieved from https://www.newworldencyclopedia.org/p/index.php?title=Harrison_Gray_Otis&oldid=1063984
Categories:
Hidden category:
This page was last edited on 29 January 2022, at 20:43.
Content is available under Creative Commons Attribution/Share-Alike License; additional terms may apply. See Terms of Use for details.