Hannibal Hamlin (August 27, 1809 – July 4, 1891) was an American politician from the state of Maine. Hamlin served in the Maine Legislature, the U.S. House of Representatives, the U.S. Senate and as Governor of Maine. He was the first Republican to serve as Vice President of the United States, elected as Abraham Lincoln's running mate in the 1860 presidential election.

From the very beginning of his political career he was prominent as an opponent of the extension of slavery; he was a conspicuous supporter of the Wilmot Proviso, and spoke against the Compromise of 1850. In 1854 he strongly opposed the passage of the Kansas-Nebraska Act, which repealed the Missouri Compromise. When the Democratic Party endorsed that repeal he withdrew and joined the newly organized Republican Party, causing a national sensation. 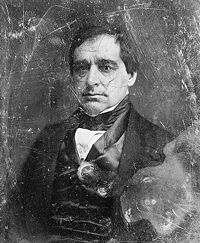 Hamlin in his younger years.

Hamlin was born on Paris Hill (National Historic District) in Paris, Maine, in Oxford County, a descendant of James Hamlin who had settled in the Massachusetts Bay Colony in 1639. He attended the district schools and Hebron Academy there, and later managed his father's farm. For the next few years he worked at several jobs: schoolmaster, cook, woodcutter, surveyor, manager of a weekly newspaper in Paris, and a compositor at a printer's office. He studied law and was admitted to the bar in 1833. He began practicing in Hampden, where he lived until 1848.

Hamlin's political career began in 1836, when he began a term in the Maine House of Representatives after being elected the year before. He served in the Aroostook War, which took place in 1839. Hamlin left the House in 1841. He served two terms in the United States House of Representatives, from 1843-1847. He was elected to fill a Senate vacancy in 1848 and to a full term in 1851. A Democrat at the beginning of his career, Hamlin supported the candidacy of Franklin Pierce in 1852.

Hamlin opposed slavery, saying it was morally wrong. He was unable to continue as a member Democratic Party due their support of the Kansas-Nebraska Act which repealed the Missouri Compromise. On June 12, 1856, he withdrew from the Democratic Party and became a Republican.

The Republicans nominated him for Governor of Maine in the same year, and having carried the election by a large majority he was inaugurated in this office on the January 8, 1857. In the latter part of February, however, he resigned the governorship, and was again a member of the Senate from 1857 to January 1861. 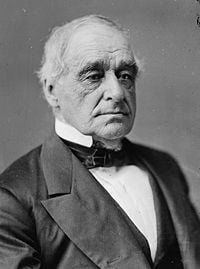 Hamlin in his elder years.

He was chosen for the second place on the winning Republican ticket in 1860. While Vice President he was not necessarily one of the chief advisers to President Abraham Lincoln, although he urged both the Emancipation Proclamation and the arming of African Americans. He strongly supported Joseph Hooker's appointment as commander of the Army of The Potomac, which was a dismal failure. It is believed that this may have been among the decisions that along with his identification with the Radical Republicans caused him to be dropped from the Republican presidential ticket in 1864. Lincoln himself left behind no indication or record revealing the reason he switched his Vice-President. He chose Andrew Johnson, who was a member of the Democratic Party and a southerner. It is believed Johnson was viewed by the Republican Party as someone who could help win southern support bu he was not viewed as someone who would help carry the reconstruction of the nation forward.[1]

Some believe that Hamlin was dropped from the ticket in 1864 because he cast a tie breaking vote in the Senate as Vice President—against the Lincoln Administration—on a bill intended to send black slaves in the District of Columbia back to Africa as a partial means to resolve the slavery issue. Hamlin was isolated as Vice President, was not a part of the Kitchen Cabinet, and did not object to Johnson's substitution on the ticket. Hamlin preferred to be a full voting member of the Senate anyway.

Hamlin served in the Senate from 1869 to 1881. In June 1881, President James Garfield nominated him for the post of ambassador to Spain, in which capacity he served from 1881 to 1882. After he completed the posting he retired from public life.

Hamlin had six children, four by his first wife, Sarah Jane Emery, and two by his second wife, Ellen Vesta Emery.[2] Two of his sons, Charles and Cyrus, served in the Union forces during the Civil War. Two of his children, Charles and Sarah were present at Ford's Theater the night of Lincoln's assassination. His son Hannibal Emery Hamlin was Maine state Attorney General from 1905 to 1908. His great-granddaughter Sally Hamlin was a child actor who made many spoken word recordings for the Victor Talking Machine Company in the early years of the twentieth century.

Hamlin County, South Dakota is named in his honor, as is Hamlin, West Virginia, the county seat of Lincoln County. There are statues in Hamlin's likeness in the United States Capitol and in Bangor, Maine. The Kings County Museum in Kentville, Nova Scotia, at one time maintained what is believed to be the only exhibit on the subject of Hannibal Hamlin.

Retrieved from https://www.newworldencyclopedia.org/p/index.php?title=Hannibal_Hamlin&oldid=1005838
Categories:
Hidden category:
This page was last edited on 26 July 2017, at 16:43.
Content is available under Creative Commons Attribution/Share-Alike License; additional terms may apply. See Terms of Use for details.