Great Chain of Being 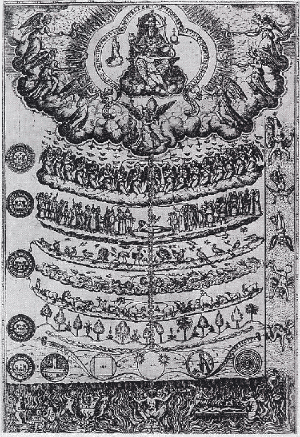 1579 drawing of the great chain of being from Didacus Valades, Rhetorica Christiana.

The Great Chain of Being or scala naturæ is a classical conception of the metaphysical order of the universe in which all beings from the most basic up to the very highest and most perfect being are hierarchically linked to form one interconnected whole. Although this notion was viewed in various ways from antiquity and throughout the medieval period, its philosophical formulation can perhaps best be seen beginning with Aristotle, moving through the Neoplatonists, and culminating in the theological vision of the scholastics.

Although many modern philosophers abandon the classical view, some alternate versions of the Great Chain of Being can be seen in the metaphysical rationalists of the seventeenth and eighteenth century. Beyond the realms of academic philosophy, the Great Chain of Being characterizes a cosmology that in its essence traces back to the Egyptian and Greek civilizations in the West and is continuous through Judaism, Christianity, Islam, Hinduism, Buddhism, and ancient Chinese thought. Discarded by many or even most intellectuals under the critique from modern science and philosophy, the cosmology of the Great Chain of Being in various forms nonetheless remains powerfully attractive to millions of people who are uncomfortable and unfulfilled within the cosmology presented by modern scientific materialism.

Although it was the Neoplatonists who fully developed the notion of a unified hierarchy of being, the roots of these ideas can be found in both Plato and Aristotle. Aristotle, in particular, viewed the universe as being eternal and made up of a number of distinct forms of being. On the lowest rung were lifeless “artifacts” such as rocks, whose material composition was held together by physical forces. To break a piece of rock in two caused no substantial change, since the rock had no essence or soul. In classical philosophy soul (anima) was attributed not only to human beings, but to all living things. Soul was defined as the inner organic principle animating the being such that it is alive. All living beings have essences or substantial forms that determine the kind of attributes or powers each particular being possesses. For Aristotle there was a kind of hierarchy of souls, which were classified according to each soul’s specific powers.

First, any being with life possess the powers to grow and reproduce. This includes all plant life, such as trees, grass, and flowers. Next, the sensible soul is embodied in animal life. Although animal life itself can be broken up into various classes depending on the specific attributes, Aristotle located a number of powers that the higher animals all possess. These include the powers of the lower forms of life (growth and reproduction) along with higher ones (sense, movement, and memory). Above the sensitive soul is the rational soul, which defines the human being. Along with all the powers of both plant and animal life, the human being possesses the power of reason and all the functions of rationality.

Again, in Aristotle’s cosmology the universe was eternal. For this reason he considered the celestial beings (sun, planets, stars, etc.) as also being eternal. These celestial beings were considered not only eternal but godly and so their circular course or movement was divine. Finally, in his Metaphysics Aristotle offers his famous argument for the existence of the Prime Mover, which is the ultimate source and principle of all movement throughout the universe. Although the scholastics will later translate Aristotle’s “First Mover” into a personal God, Aristotle’s understanding of this divine First Mover remains ambiguous.

The Neoplatonists, such as Plotinus (205-270), took Aristotle’s hierarchy of distinct beings and “spiritualized” it into a quasi-mystical unity inspired by Plato. While the basic hierarchal structure of Aristotle remained the same, the highest “forms” were transformed into purely spiritual or immaterial beings. Plato, in his famous 'Theory of the Forms', had thought of Ideas as immutable or unchangeable beings in which material beings on earth participated. For example, all individual dogs participated in the one eternal Idea of Dog (or Dogness), which exists in a higher, immaterial realm. Also, in his 'Analogy of the Sun' Plato speaks of the Good which is “beyond all being.” The Neoplatonists develop these notions in such a way that the degree of goodness a thing possesses depends upon its degree of being, that is, the extent to which a being participates in the One or Good. The Great Chain of Being, then, is seen as a chain of emanation. The One is at the top and so all being flows downward from the One. Below the One, then, are the spiritual beings of Ideas, rational human beings, sensible animals, living plants, and finally inanimate things (which merely exist). Human beings hold a particularly interesting place in this perspective since they exist at once in both the immaterial and material realms. The more humans turn downward and absorb themselves in material things, the more they turn away from the good and become evil. In contrast, the more humans turn upward to the intelligible realm and the Good, the more being or goodness they possess. Moreover, in this conception pure evil does not exist. For evil, strictly speaking, is not a being or positive force but rather a privation or lack of being.

St. Augustine borrowed the basic scheme developed by Neoplatonism and theologized it into a Christian understanding. While the lower, material realm remained the same, the higher intelligible sphere and the notion of the Good shifted in important ways. First, the Good or One became the personal and triune God of Christianity. Below God there were the higher, spiritual beings called angels. Finally, the Ideas or Forms of the intelligible realm remained in Augustine, but now they were considered to be Divine Ideas or Universals, which existed in the mind of God.

The basic scheme of the Great Chain of Being endured throughout the medieval period, although disputes persisted regarding the exact nature of Universals and the extent to which human beings could participate in or know the thoughts of God. Moreover, in many of the more sophisticated, scholastic thinkers, the classification of earthly beings was subdivided into more distinct species. Also, the great thirteenth century philosopher and theologian St. Thomas Aquinas (1225?-1274), determined that the angels could not be members of the same species, the way individual humans beings are of the same species. The reason is that for Aquinas matter is what individuates all beings of the same species; angels, however, are immaterial; therefore, in order for angels to be separate and individual they must each be their own species, or “one of a kind.”

Also, in the scholastic understanding of the Great Chain of Being, the place of human beings takes on a greater moral significance. Since humans participate in both the earthly and spiritual realms, their movement through life is considered to be a journey toward God. The temptations of the earthly or mortal flesh lead to evil, whereas the contemplation of things divine lead to transcendence of the spirit. Thus, the struggle between flesh and spirit becomes a specifically moral one. The way of the spirit lifts one up toward God, while the desires of the flesh sink one into the privations of evil.

In medieval society, one sees how the Great Chain extended into the political sphere as well. For here too there was a distinct separation or hierarchy between human beings. The king reigned supreme at the top, and below him were the aristocratic lords. At the bottom were the serfs. Solidifying the king's position atop of humanity's social order was the doctrine of the divine right of kings. Likewise, in the family the father was head of the household and below him was his wife, then their children. The children were even often subdivided so that the sons were considered to be one rung above the daughters.

The emergence of modern science and the Copernican Revolution is often considered to have dismantled The Great Chain of Being as a worldview. Nonetheless, certain rational metaphysicians, such as Rene Descartes (1596-1650), Baruch Spinoza (1632-1677) and G. W. von Leibniz (1646-1716), created alternate versions of the Great Chain of Being. The distinguishing feature is that they all tried to devise rational systems which explain God or Being as the ultimate Perfection such that all other forms of being were lesser or imperfect modes or derivatives of the perfect Being. Most of these thinkers offer proofs for the existence of this highest Being and then from this necessary first principle they deduce all other beings or modes of being. Their rationalist systems have often been criticized for being too mathematical in their constructions and for equating reality with a mathematical demonstration.

Retrieved from https://www.newworldencyclopedia.org/p/index.php?title=Great_Chain_of_Being&oldid=1005515
Categories:
Hidden category:
This page was last edited on 12 July 2017, at 23:14.
Content is available under Creative Commons Attribution/Share-Alike License; additional terms may apply. See Terms of Use for details.