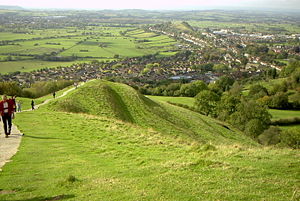 Glastonbury is a small English town famed for its ancient monastic sites and legendary connections to historic figures, both religious and royal. A gravitational center for legendary activity, Glastonbury, which lies among the ditches and low meadows of the Somerset Level, has a population of 8,800 inhabitants. The small patch of land has been a pilgrimage site for hundreds of years, with spiritual seekers drawn to its ancient ruins, including sites such as Glastonbury Lake Village, Glastonbury Abbey and Glastonbury Tor. The Glastonbury Festival takes place annually in the nearby village of Pilton. Glastonbury is also said to be the center of several ley lines.

It is believed that King Arthur and Queen Guinevere not only resided in the town, but were laid to rest there. The monastery of Glastonbury is believed by many to have held the Holy Grail. Joseph of Arimathea, according to tradition, visited Glastonbury, once with the still young Jesus. This particular legend inspired the words to the most patriotic of English songs, "Jerusalem," which asks the question

"And did those feet in ancient time walk upon England’s mountains green?" 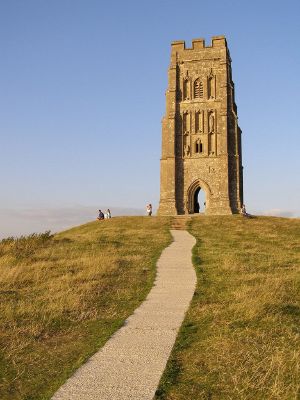 Remains of St. Michael's Church at the summit of Glastonbury Tor. 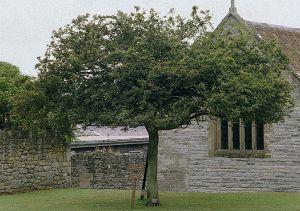 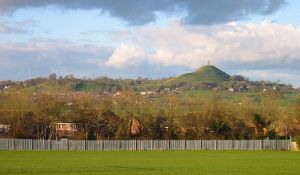 Glastonbury Tor from the nearby town of Street. 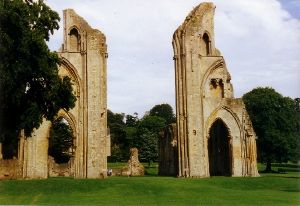 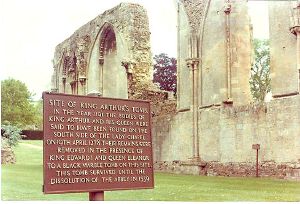 The origins of Glastonbury are deeply rooted in myth and religious affiliation. According to the prevailing mythology, the Somerset plain was once a swampy, wet terrain unsuitable for human occupation. The only area in the region that was suitable for settlement, according to this myth, was the high land of Glastonbury. As the most attractive location, the elevated plot of land hosted Romans, Saxons, and an early abbey.

According to the early church tradition Joseph of Arimathea was a tin trader and as such visited Cornwall, the world’s main source of tin until recently. After the death of Joseph, Mary’s husband, – Joseph of Arimathea took care of Jesus and took him on his visits to Britain. Jesus built a hut at Glastonbury where he lived. St. Augustine wrote a letter to Rome confirming this after he was sent to England by the Pope.

The Joseph of Arimathea legend relates to the idea that Glastonbury was the birthplace of Christianity in the British Isles, and that the first British church was built there at Joseph's behest to house the Holy Grail, 30 or so years after the death of Jesus. The legend also says that earlier Joseph had visited Glastonbury along with Jesus as a child. The legend probably has its origins in the mediaeval period when religious relics and pilgrimages were profitable business for abbeys. However William Blake believed in this legend and wrote the poem that became the words to the most patriotic of English songs, 'Jerusalem' (see And did those feet in ancient time).

The growth of the monastery was fueled by the multitude of myths surrounding the nearby hill, Glastonbury Tor. Many pilgrims who sought guidance at the monastery of Glastonbury also sought time on the hill, which was believed by many to hold the Holy Grail. According to myth, Joseph of Arimathea hid the holy grail in a small church built on the hill. Believers in this version of Glastonbury history hold that the small church built by Joseph was the first Christian Church in England. Under this idea, Glastonbury Tor is seen as the birthplace of British Christianity.

As the center of the town, the abbey came to dominate life in Glastonbury. Industry in particular was supported by the expanding monastery, as the church began to support the development of tanners and other craftsmen in the area to provide much needed supplies for the abbey. The abbey continued to expand until 1184, when a savage fire destroyed much of the development. A small portion of those monastic remains still exist.

One particularly prominent myth in the Glastonbury story regards the Glastonbury Thorn (or Holy Thorn). According to legend, Joseph of Arimathea arrived at the monastery at a time when the wet Somerset Levels were only passable by boat. Arriving on the shores of Glastonbury, the legend states that he placed his staff, grown from Christ's Holy Crown of Thorns, on the shore to steady his step. From where this sacred staff hit the ground of Glastonbury, a small thorny bush sprung up. Many feel that the presence of the Crataegus hawthorn tree in Glastonbury confirms this particular myth, as it is found nowhere else in the world.

One version of the legend relates that Jesus, while a boy, accompanied by Joseph of Arimathea, travelled to Glastonbury. This is linked with an idea from the Book of Revelation that describes a Second Coming in which Jesus establishes a new Jerusalem. Consequently the Christian Church in general, and the English Church in particular, used Jerusalem as a metaphor for heaven. William Blake knew of the legend, and whether or not he believed it, he was inspired to write the poem that became the words to the most patriotic of English songs, "Jerusalem." The text is as follows:

And did those feet in ancient time

And was the holy Lamb of God

And did the countenance divine

shine forth upon our clouded hills?

And was Jerusalem builded here

among these dark Satanic Mills?

Bring me my bow of burning gold!

Bring me my arrows of desire!

Bring me my chariot of fire!

I will not cease from mental fight,

nor shall my sword sleep in my hand,

till we have built Jerusalem

In England’s green and pleasant Land.

While many of the myths about Glastonbury history focus on the role of Joseph of Arimathea in contributing to the town, a mythological counterpart exists that supports the idea that it was King Arthur, not Joseph of Arimathea, that contributed the most to the town. According to this mythological camp, Glastonbury is the modern manifestation of the mythical city of Avalon, where Arthur and Guinevere were laid to rest. Accounts also claim that Lancelot sought the refuge of Glastonbury Abbey after the death of King Arthur.

Fueled by the legacy of myth, Glastonbury continues to attract hordes of tourists annually who strive to reconnect with ancient times. Most of the tourists seek the ruins of the Abbey, which are still open to visitors. Only small portions of the original structures remain however, due both to the fire that ravaged the town in the early 12th century and to the tendency for local builders to use abandoned stones when building modern structures. The Abbot's Kitchen and Lady's Chapel are two strongly preserved edifices.

The hippie generation of the 1960s and 1970s also contributed heavily to establishing Glastonbury as a center for alternative religious study. The summer solstice of 1971 was a particularly poignant moment in the alternative history of Glastonbury, as nearby hills flooded with people attempting to experience the season change at the mythological site. This mass gathering of spiritual individuals is often compared with Woodstock in the United States for the sheer number of attendees and alternative ideas.

The economy of Glastonbury maintains many of the characteristics of a traditional market town: local produce is still prominent and market exchange takes place in small scale relationships. Key agricultural products in the lower elevations, that are necessarily more damp, include peat and withes for basket making. Herds of cattle are still a common site roaming the hills of Glastonbury, and the milk drawn from the herds is used to make Cheddar Cheese, the region's distinct type of cheese.

In the higher elevations of Glastonbury, where the air is drier, strawberries and apple orchards dot the landscape. Another common site in the less damp regions is field after field of grape vines. Vineyards have always been a typical agricultural crop of the region, with some historians claiming that the crop can be traced to Roman times.

The nearby village of Street has blossomed from its humble beginnings as a market town into an industrial center. Street is particularly noted for its export of leather shoes by the Clarks family. Despite becoming an export center, however, Street maintains its small town feeling, reassuring many that the encroachments of the future will not change the character of life in Glastonbury.

Retrieved from https://www.newworldencyclopedia.org/p/index.php?title=Glastonbury&oldid=1005288
Categories:
Hidden category:
This page was last edited on 23 June 2017, at 16:09.
Content is available under Creative Commons Attribution/Share-Alike License; additional terms may apply. See Terms of Use for details.