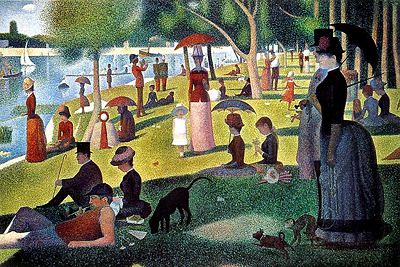 Sunday Afternoon on the Island of La Grande Jatte

Georges-Pierre Seurat (December 2, 1859 – March 29, 1891) was a French painter and the founder of Neo-Impressionism. His large work Sunday Afternoon on the Island of La Grande Jatte is one of the icons of nineteenth century-painting. Born in Paris, Seurat attended the École des Beaux-Arts, later working out of a small studio on the Left Bank. After being rejected by the Paris Salon, the artist helped form the Société des Artistes Indépendants.

Influenced by the scientist-writers of the nineteenth century, Seurat was intrigued with the Pointillist technique involving the juxtaposition of two colors, slightly overlapping or very close together, which has the effect of producing another color when seen from a distance. This technique became the basis for Neo-Impressionism, which made extensive use of complementary colors in their paintings. Seurat sought to establish harmony, or what he termed "emotion," by the use of lines, color intensity, and color schema in his paintings. Neo-Impressionism gave rise to Fauvism and Cubism in the twentieth century, inheriting to them an awareness of the formal aspects of paintings and a theoretical language by which to paint.

Seurat died of diphtheria at age 31, leaving behind an ambitious, unfinished work The Circus. 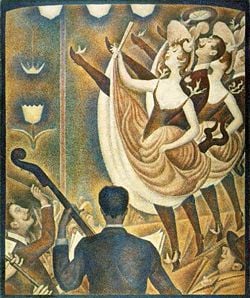 Seurat was born to a well-off family in Paris. His father was a legal official. Seurat first studied art with Justin Lequien, a sculptor. He attended the École des Beaux-Arts in 1878 and 1879. After a year of service at Brest military academy, he returned to Paris in 1880. He shared a small studio on the Left Bank with two student friends before moving to a studio of his own. For the next two years he devoted himself to mastering the art of black and white drawing. He spent 1883 on his first major painting—a huge canvas titled Bathing at Asnières.

After his painting was rejected by the Paris Salon, Seurat turned away from establishments such as the Salon, instead allying himself with the independent artists of Paris. In 1884, he and other artists, including Maximilien Luce, formed the Société des Artistes Indépendants. There he met and befriended fellow artist Paul Signac. Seurat shared his new ideas about pointillism with Signac, who subsequently painted in the same idiom. In the summer of 1884, Seurat began work on his masterpiece, Sunday Afternoon on the Island of La Grande Jatte, which took him two years to complete.

Later he moved from the Boulevard de Clichy to a quieter studio nearby, where he lived secretly with a young model, Madeleine Knobloch. In February 1890, she gave birth to his son. It was not until two days before his death that he introduced his young family to his parents. Shortly after his death, Madeleine gave birth to his second son, whose name is unknown.

Seurat died of diphtheria and was buried in Cimetière du Père-Lachaise. His last ambitious work, The Circus, was left unfinished at the time of his death.

During the nineteenth century, scientist-writers such as Eugène Chevreul, Nicholas Ogden Rood, and David Sutter wrote treatises on color, optical effects, and perception. They were able to translate the scientific research of Helmholtz and Newton into a written form that was understandable by non-scientists. Chevreul was perhaps the most important influence on artists at the time; his great contribution was producing the color wheel of primary and intermediary hues. 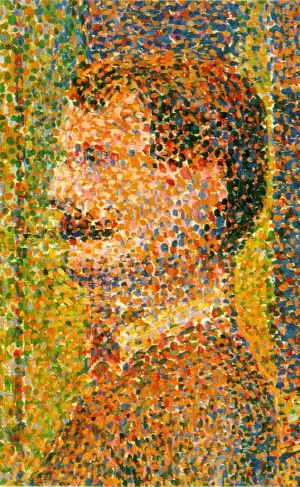 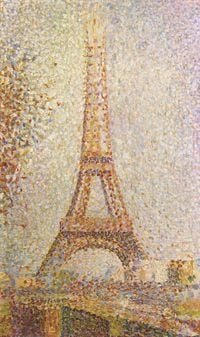 Chevreul was a French chemist who restored old tapestries. During his restorations of tapestries he noticed that the only way to restore a section properly was to take into account the influence of the colors around the missing wool. He could not produce the right hue unless he recognized the surrounding dyes. Chevreul discovered that two colors juxtaposed, slightly overlapping or very close together, would have the effect of another color when seen from a distance. The discovery of this phenomenon became the basis for the Pointillist technique of the Neo-Impressionist painters.

Chevreul also realized that the "halo" that one sees after looking at a color is actually the opposing, or complementary, color. For example: After looking at a red object, one may see a green echo/halo of the original object. This complementary color (i.e., green for red) is due to retinal persistence. Neo-Impressionist painters interested in the interplay of colors made extensive use of complementary colors in their paintings. In his works, Chevreul advised artists that they should not just paint the color of the object being depicted, but rather they should add colors and make appropriate adjustments to achieve a harmony. It seems that the harmony Chevreul wrote about is what Seurat came to call "emotion."

According to Professor Anne Beauchemin from McGill University, most Neo-Impressionist painters probably did not read Chevreul's books, but instead they read Grammaire des arts du dessin, written in 1867 by Charles Blanc, who cited Chevreul's works. Blanc's book was targeted at artists and art connoisseurs. Color had an emotional significance for him, and he made explicit recommendations to artists which were close to the theories later adopted by the Neo-Impressionists. He said that color should not be based on the "judgment of taste," but rather it should be close to what we experience in reality. Blanc did not want artists to use equal intensities of color, but rather to consciously plan and understand the role of each hue. 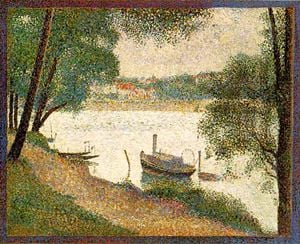 Another important influence on the Neo-Impressionists was Nicholas Ogden Rood, who also studied color and optical effects. Whereas the theories of Chevreul are based on Newton's thoughts on the mixing of light, Rood's writings are based on the work of Helmholtz, and as such he analyzed the effects of mixing together and juxtaposing material pigments. For Rood, the primary colors were red, green, and blue-violet. Like Chevreul, he stated that if two colors are placed next to each other, from a distance they look like a third distinctive color. Rood also pointed out that the juxtaposition of primary hues next to each other would create a far more intense and pleasing color when perceived by the eye and mind, than the corresponding color made by mixing paint. Rood advised that artists be aware of the difference between additive and subtractive qualities of color, since material pigments and optical pigments (light) do not mix together in the same way:

Other influences on Seurat included Sutter's Phenomena of Vision (1880), in which he wrote that "the laws of harmony can be learned as one learns the laws of harmony and music," as well as mathematician Charles Henry who in the 1880s delivered monologues at the Sorbonne about the emotional properties and symbolic meaning of lines and color. Henry's ideas were quickly adopted by the founder of Neo-Impressionism.

Seurat's melding of science and emotion 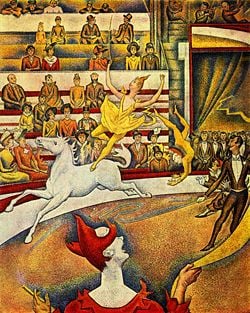 Seurat took to heart the color theorists' notion of a scientific approach to painting. He believed that a painter could use color to create harmony and emotion in art in the same way that a musician uses variation in sound and tempo to create harmony in music. Seurat theorized that the scientific application of color was like any other natural law, and he was driven to prove this conjecture. He thought that the knowledge of perception and optical laws could be used to create a new language of art based on its own set of heuristics and he set out to show this language using lines, color intensity, and color schema. Seurat called this language Chromoluminarism.

In a letter to Maurice Beaubourg in 1890, he expresses his feelings about the scientific approach to emotion and harmony. He wrote, "Art is Harmony. Harmony is the analogy of the contrary and of similar elements of tone, of color and of line, considered according to their dominance and under the influence of light, in gay, calm or sad combinations." [1]

Seurat's theories can be summarized as follows: 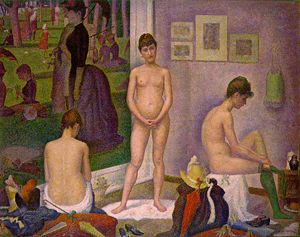 Seurat's most famous work was his Sunday Afternoon on the Island of La Grande Jatte. It shows people of all different classes in a park. The tiny juxtaposed dots of multi-colored paint allow the eye of the viewer to blend colors optically, rather than having the colors blended on the canvas or pre-blended as a material pigment. It took Seurat two years to complete this 10-foot wide painting, and he spent much time in the park sketching to prepare for the work (there are about 60 studies). It is now exhibited in the permanent collection of the Art Institute of Chicago.

Seurat was the standard-bearer and leading theorist of the Neo-Impressionist movement. According to Neo-Impressionist theory, the application of paint in this fashion set up vibrations of colored light that produced an optical purity not achieved by the conventional mixing of pigments. The rigid theoretical tenets of optical painting gave way to a more fluid technique following his untimely death in 1891. In the luminous watercolors of Henri-Edmond Cross, for example, small, precise brush marks were replaced by long, mosaic-like strokes and clear, contrasting hues by a vibrant, saturated palette.

While some artists like Henri Matisse merely flirted with Neo-Impressionism and others like Camille Pissarro renounced it entirely, Seurat's legacy extended well into the twentieth century in the works of Henri-Edmond Cross and Paul Signac. Poised between Impressionism in the nineteenth century and Fauvism and Cubism in the twentieth, Neo-Impressionism brought with it a new awareness of the formal aspects of paintings and a theoretical language by which to paint.

Retrieved from https://www.newworldencyclopedia.org/p/index.php?title=Georges-Pierre_Seurat&oldid=1089224
Categories:
Hidden category:
This page was last edited on 24 November 2022, at 22:59.
Content is available under Creative Commons Attribution/Share-Alike License; additional terms may apply. See Terms of Use for details.